Filming a movie at Palisades Park 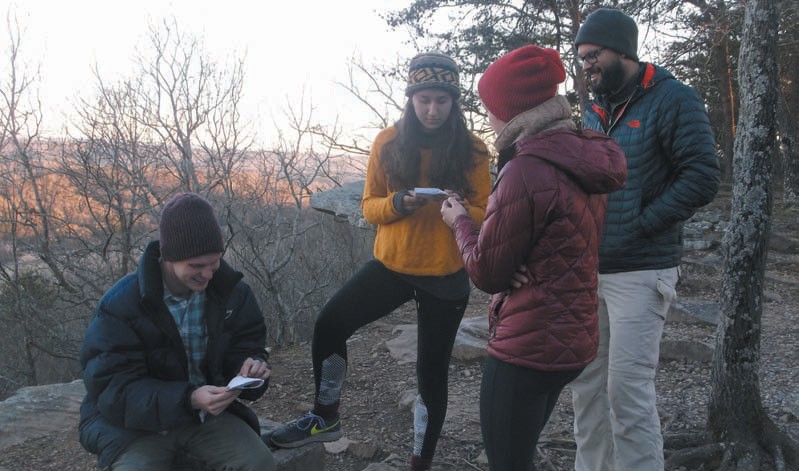 Director Mary Jeanes (in red) discusses how she wants Michael Findlay (seated) and Antonina Vargus (in yellow) to prepare for the next scene while Producer Ivo Huahua (far right) listens in.

Twenty-three students from Florida State University (FSU) recently came to Palisades Park in Blount County. Between the ages of 22 and 32, they are a very select and diverse group. Two members are from Ecuador, four from China, and the rest from all over the United States. Half are male; half are female. They are completing their final year in the master’s program at FSU’s College of Motion Picture Arts. Sixteen students will each direct a 12-minute film. The films will be put together for a total of 192 minutes (just over three hours). Exposure is one of those 12- minute films that was filmed at Palisades Park. 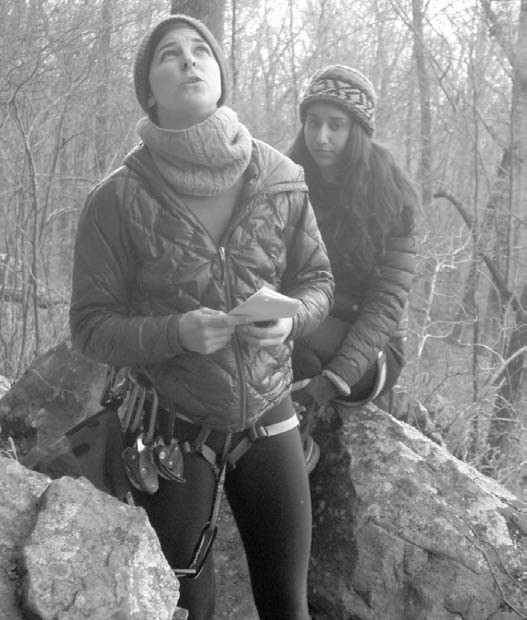 After giving actress Vargas a new way to play the scene, director Jeanes shouts instructions to the actor at the top of the cliff.

Exposure’s producer, Ivo Huahua (pronounced ee-vo wa-wa) is from Ecuador. Every year a large number of people apply to the master’s program at FSU’s College of Motion Picture Arts. This is a highly competitive program, and last year, only 23 students were chosen instead of the normal 24. For the first year, all students learned each of the areas involved in filmmaking – directing, producing, cinematography, editing, etc. –before choosing which they would specialize in. Students have been given specific jobs as members of a crew. The students are also given a budget that must stretch for each of the 16 different locations. FSU’s College of Motion Picture Arts loaned the students over $500,000 of the best equipment in the business today to make the films.

As producer of Exposure, Huahua had to wear many different hats. First and foremost, safety was key. He hired a professional rock climber to be on set at all times and to mark off places that were dangerous. Huahua also had to follow a strict budget with responsibilities including lodging, meals, snack, salaries, and transportation for actors and crew. Many groups in Blount County agreed to help with food and lodging.

“Anytime anyone comes to Blount County, we want to help them,” explained Wilson.“This was a group of students with limited resources and a strict budget. We wanted to show what great people we have here in Blount County, and through this movie, people around the world will see how beautiful Blount County really is.”

Exposure is an adventure drama with a running time of twelve minutes. Jeanes is an avid rock climber. She got the idea for the film while listening to her climbing friends tell stories. They were emphasizing how one simple mistake can quickly turn into devastation while climbing.

Shooting the film began every day at 6:00 a.m. With only eight days to film, the crew and actors worked over eleven hours a day. Instead of relying on artificial lighting, the crew used the natural light in Palisades Park. Because there was a professional rock climber and the director had rock climbing experience, they were able to suspend huge cameras on ropes so they could move the cameras up and down to get the perfect shot. The two members of the cast are Antonina Vargus, an FSU student pursuing a career in acting, and Michael D. Findlay, an actor and avid rock climber from Los Angeles, Calif. Vargas and Findlay had never met before arriving at Palisades Park.

“In a short film, you get less time and fewer scenes to bond with the other character,” added Findlay.“I’ve really enjoyed being able to put my passions for acting and rock climbing together. I’ve never been to the South in my life, and it was such a pleasure putting a face to the South. Everyone from Blount County has been so nice to us.”

Vargas was certainly not new to acting, but rock climbing was a whole other story.“Since I had no climbing experience, Mary [Jeanes] got me a one-month membership to a rock climbing gym. I was able to learn rock climbing terms, and I’ve really enjoyed climbing the rocks at Palisades Park.”

Exposure is the story of Erin, who goes rock climbing outdoors for the first time with her boyfriend, Rolan, an experienced climber. The unthinkable happens. Rolan makes a simple mistake, and gets stuck at the top of a cliff without any rope. With no jacket and below-freezing temperatures, he begins suffering from exposure. Out of options and help still hours away, Erin must choose whether to let Rolan die or risk her life to save his.

One of the most common misconceptions about making a movie is that the actors just show up, do a couple of scenes a day, and get paid. Filmmaking is not as easy as it may appear. The actors, who had just met, had to do the most emotional scene the first day. Movies are not usually filmed in the order in which we see them. Many times, the ending is taped before the beginning.

There will be 12 minutes of beautiful Blount County scenery in the completed film. The students will present their thesis films to their professors in Tallahassee on August 6. The second showing will be here in Blount County. Although the students are not sure where the film will be shown, they do know that Blount County will be the first stop after showing their professors. After that, it will go from one film festival to another all around the country and even outside the United States.

“We cannot wait to show Exposure here in Blount County,” summarized Huahua.“It’s such a beautiful place. I cannot think of a better place to show the movie. You won’t find kinder people anywhere than the people in Blount County. They really made us feel at home.”