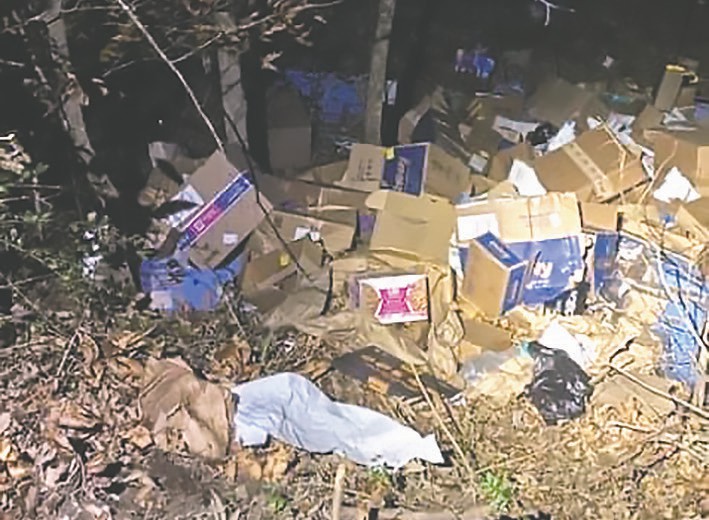 On what was supposed to be a day of family, food, football, and fun, many Blount County Sheriff’s Office deputies spent Thanksgiving morning securing the scene of more than 300 FedEx boxes that were dumped down a ravine at River Oak Trail in the Hayden community. The packages were discovered late Wednesday afternoon by a private citizen on his property. Deputies were dispatched as well as an area FedEx manager.

FedEx responded quickly and began sending multiple trucks and drivers from all over the south to begin loading the packages as soon as the Thanksgiving day sun came up. According to Sheriff Mark Moon, the packages appeared to have been recently dumped and were still intact. Although there was a river nearby, none of the packages were located in the water and all packages were removed from the scene by mid-morning. To prevent onlookers, those searching for missing packages, and potential thieves, officers remained on the scene throughout the Thanksgiving eve night.

As word spread Wednesday night and Thursday morning, Hayden residents did not let the dedication of the Sheriff’s Office and FedEx team members go unnoticed. Community members and Countyline Baptist Church organized and provided plates to the workers on scene Thursday morning.

This is an ongoing investigation and FedEx is working with authorities as it progresses. Moon reported via Facebook on Tuesday morning that the driver had dumped packages at least six times and there are approximately 450 individual victims. WBRC reported the driver is no longer employed with FedEx and packages are being delivered. Moon asks for patience as investigators continue to work the cases. New information will be shared as it is available.