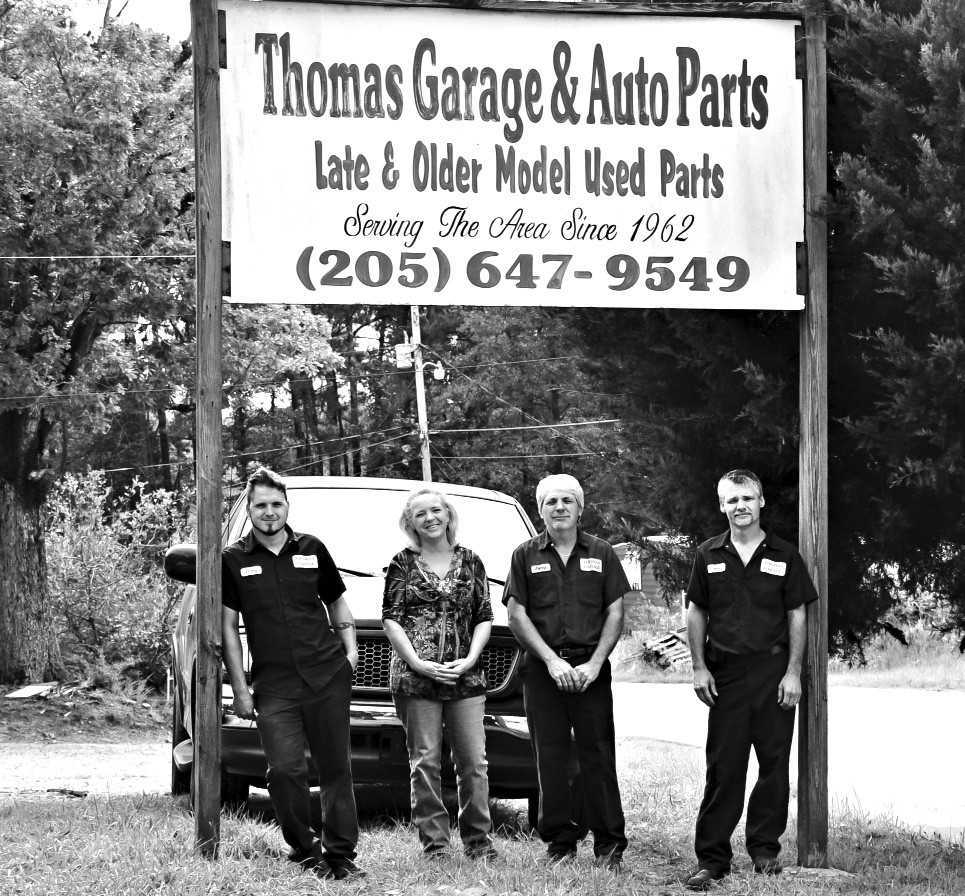 Jeremy Hopkins, Brenda Thomas, Johnny Thomas, and Joseph Thomas own and operate Thomas Garage. This year, the business is celebrating its 50-year anniversary.

In 1962, Sara Thomas encouraged her husband, Arnold, to begin his own business. Fifty years later, his business is still going strong. Thomas Garage and Auto Parts, in Warrior, is a family- owned and-operated business where the employees have seen their fair share of hard economic times but continue to find success through the hardworking principles taught by Arnold and Sara.

The business has changed hands a few times throughout the years but has always been under the management of a Thomas. Arnold, who continued to suffer from a leg injury that occurred when he was 16, had to hand it down to his son, Pete, who was only 17 and still in school. After 13 years of owning the business, Pete bestowed the garage to his brothers, Johnny and Joseph, who own it to this day.

Family members not only own the business, but they also make up the majority of the employees who have kept the business running. Throughout the years, many members of the family have worked at the garage including Arnold and Sara’s three daughters Linda, Julie, and Brenda, and Brenda is currently the secretary. The trend is continuing with Jeremy Hopkins, grandson of Arnold and Sara, who is a mechanic at Thomas Garage.

In accordance with Sara’s wishes, all bookkeeping is done the old, manual way with no help from computers. Sara was greatly involved in the garage. The 50th anniversary was bittersweet for the employees considering Sara died on Sept. 24. The group’s plans were initially to have a celebration for their 50th year, but they now say it wouldn’t be the same without Sara.

“She was the glue,” Johnny said.

Numerous sympathy cards from the garage’s customers are tacked to the walls of the office; the garage proudly serves second- and thirdgeneration customers. Another service Sara provided was a daily todo list she gave her children every morning. Johnny said at the time, they didn’t enjoy the list, but now they miss it. Her children say she was the organizer of the family, and with her insistence, all employees at the garage continue to have a prayer gathering every Friday.

“It gives you the confidence that the week is going to be good, and overall they are,” Brenda said.

Arnold, who died on Sept. 26, 1998, attended to the discipline of his children. He made sure they did their chores and told them when they did something he didn’t approve of, but they say his firm outlook gave them the tools to continue to run the business.

“He taught us a good work ethic,” Johnny said. “Everything he taught us was for a reason.”

Brenda says she feels as though she has an obligation to her parents to continue to contribute to the business as best as she can.

“It’s been a big blessing to us,” she said. “We’ve always had fulltime jobs.”

The young members of the Thomas family are already learning the ins and outs of the business. Some of Arnold and Sara’s grandchildren work during the summer, and Brenda says even the youngest ones are always wanting to come to the shop. It already seems another 50 years is a definite possibility, especially with this hard-working family.

For more information about Thomas Garage and Auto Parts call 647-9549 or come by their business located at 2300 Old Hayden Road.