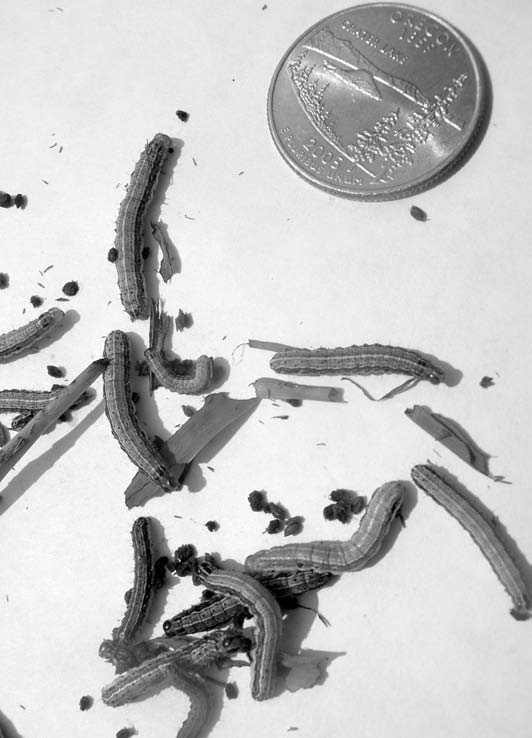 ‘The fall armyworm infestation in pasture and hayfields this summer and fall is the worst one I’ve seen in my 26 years,’ said Dan Porch, county agent in the Blount County Cooperative Extension office. The photo at right shows large mature worms (quarter for size comparison) and one small one, curled up in the center. ‘I’d agree it’s been a bad year, one of the three worst I know of,’ said Mel Wade, outside sales at Blount County Co-op. ‘We had what may have been the worst one back in the ‘80s, then we had another real bad one about five or six years ago. This year would be in the top three,’ he said. Both experts said a lot of the damage has already been done to Bermuda grass stands – a fall armyworm favorite – but that farmers are not out of the woods yet. Both warn that fall seed planted currently – such as fescue, ryegrass, rye, wheat, and winter deer plot grasses, should continue to be monitored closely for army worm infestation until the first good frost, which should end the danger period for this season. Treatment costs for farmers using any one of several different chemical agents run to approximately $15 per acre, so treating a 30-acre field could approach $500. Though difficult to calculate precisely due to unavailability of complete records on both crop treatment and crop losses, costs of treatment and losses together to county farmers could easily exceed a quarter of a million dollars.

Between the LinesSchool board adopts new calendarBlended traditional, remote learning for 2020-2021 year