End of the road for some, opportunity for others 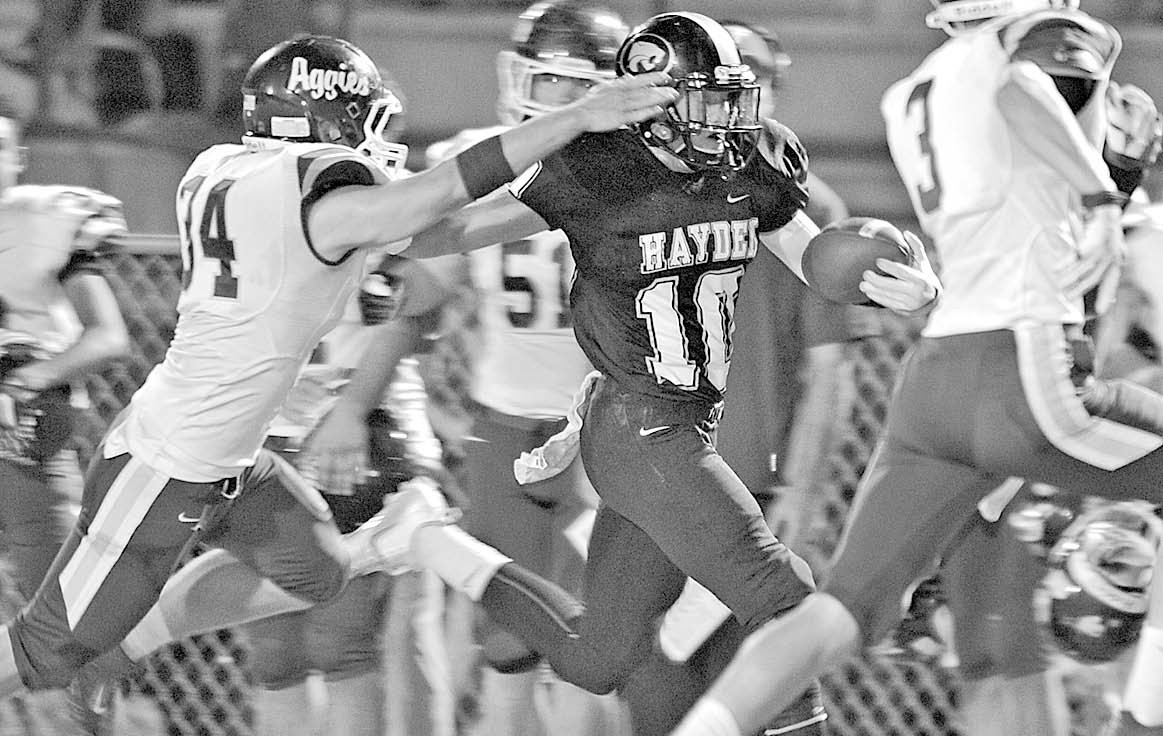 This week marks the end of the regular season for Appalachian and Locust Fork – and for the Eagles it’s the end of football for 2016.

Locust Fork has a huge date with Fultondale this week and could win the 3A Region 6 title – or probably fall to No. 3 in the region with a loss.

The playoffs are also looming in two weeks for Hayden – more on the Wildcats in a moment – and J.B. Pennington. Cleveland made things a little tricky with last week’s loss at Tarrant but if the Panthers put together a winning effort at home this week against Cold Springs, then they are in as a No. 2 seed and will host a playoff game in two weeks.

Oneonta fell out of the playoff race with last week’s tough-luck loss to Saks.

Susan Moore is not mathematically eliminated but the Bulldogs would need to upset J.B. Pennington this week and hope that Vinemont does the same to Holly Pond. Improbable? Yes. Impossible? No.

Finally, there is Hayden. The Wildcats have quietly gone 7-1 – 7-0 since the opening loss to Weaver – and now are on the brink of a region title. Standing in their way? Just perennial Wildcat nemesis Mortimer Jordan.

If you love a playoff-type atmosphere, come to western Jefferson County this Friday night. It’ll be worth the price of admission.

Nothing wrong with knocking off your biggest rival to close the season.

Ragland opened the season with backto back losses to 3A Ohatchee and 4A Ashville but the Purple Devils have been hard to handle since then, with only Wadley and TCC slowing down the Ragland offense. Senior running back Jadon Killings – all 5’8, 145 pounds of him – is an electric playmaker and he will be the focus of the Eagle defense this week. The Purple Devils can spread it around a bit and Stoney Merritt (5’10, 165 Sr) can make plays with his arm or with his legs. The Purple Devils are solid up front on both sides of the ball and average about 235 pounds. Appalachian simply couldn’t slow down TCC last week. The offense made some plays but nowhere near enough against the powerful defensive front. Look for Ragland to try to get the ball to Killings early and often this week. The Appalachian offense could prevent some problems for a Ragland defense that gave up plenty of plays last week to Donoho.

Next week – Ragland is off next week but will be in the playoffs the following week.

The Chiefs are banged-up but dangerous.

R.A. Hubbard has been hit hard by injuries this year and this is a team that started the year with just 21 on the roster. There is talent. Last week, Gaige Garth (5’9, 171 Sr) raced 71 yards through the Addison defense to give the Chiefs an early 6-0 lead. However, the Bulldogs slowly ground the Chiefs into the turf – a common theme this season. The Hubbard defense has really struggled this season – Sumiton Christian, Lynn, Decatur Heritage and Meek all put up more than 500 yards – and that is where the Mustangs could cause the visitors all kinds of problems. This Mustang offense has turned into a dangerous and explosive unit. Seth Wadsworth and Jordan Graham just keep making big plays in the passing game and Wadsworth has been able to gobble up turf on running plays. The Chief offense has been hot-and-cold this year and this one has the makings of a shootout.

The winner is the region runner-up and will play at home in the first round of the playoffs…enough said.

Cold Springs is a dangerous football team that hung in with Tanner last week until late in the third quarter. The Eagles will pound the ball behind an offensive line that is the strength of the team – and averages 235 lbs. Nic Rollo (5’11, 185 Sr) is the leading rusher for the Eagles and he can be a load to handle. The Cold Springs defense has made plays in every game this year, although this group has also given up some yards, especially on the ground. Cleveland needs to right the ship, preferably before taking the field Friday night. It’s not like the Panthers have fallen apart – if they make one more play the last two weeks against Locust Fork and Tarrant we’re talking about a 7-1 team. Last week, Caleb Collum ran over and through the Tarrant defense and that is what the Panthers will look to do this week against a Cold Springs defense that gave up more than 380 rushing yards last week. The Panther defense must have a good night, especially mentally – the Eagle offense uses a lot of motion and misdirection. Playing a home game in two weeks should be motivation enough for these two teams.

Region title hopes on the line for the Hornets.

The Wildcats are big up front with plenty of speed on both sides of the ball. That speed enabled Fultondale to rush for 563 yards last week against Holly Pond. The Wildcats attempted two passes and didn’t complete either one. The three-headed backfield monster of Derrick Moore (5’8, 180 Jr – 173 yards and two touchdowns), Jayson Jones (6’0, 165 Fr – 145 and two touchdowns) and Walter Blair (5’6, 130 Jr – 140 and one touchdown) was simply too much for the Bronco defense. The Wildcats have good size up front (avg. 245 lbs.) on both sides of the ball. Locust Fork will counter with an offense that has put up some big numbers of its own but a defense that has allowed a ton of yards and points this year. The Hornets must play keep away on offense – four yards a pop is a good thing, a very good this this week – and the Locust Fork defensive front must play well, as in the best game its played all year. Locust Fork needs to test the Wildcat defensive front with the physical running of Drew Rogers and Chase Rice. St. James hammered away on the Wildcats all night long and it paid off. Jones and Blair are dangerous on any type of return so Hornet coverage teams must be solid.

Next week – Fultondale gets a big-time test at Montevallo; Locust Fork is open but will be in the playoffs in two weeks.

Tigers and Bulldogs meet for the 71st time.

The Bulldogs went back-and-forth with Vinemont last week. The Bulldogs couldn’t stop the Vinemont passing game and the Eagles couldn’t slow down the Susan Moore running game. This week, the Bulldogs will challenge one of the better teams in Region 6 and J.B. Pennington is coming off an open week. The Tiger defense has struggled at times this year, giving up a lot of yards (and points) to Holly Pond, Locust Fork, Cleveland and Fultondale, but this group totally shut down Vinemont two weeks ago. Susan Moore will look to establish the running game – no surprise there – against a Tiger defensive front that has had a week to rest and heal. Pennington will counter with a balanced offense that will test a Bulldog defense that has had all kinds of trouble slowing down better offenses. Pennington is hoping to lock up a home playoff game while Susan Moore needs to upset the Tigers – and have Vinemont knock off Holly Pond – to hope to sneak into the playoffs.

Redskins and Bulldogs have played some great games the last few years.

Oneonta laid it all on the line last week and almost knocked off Saks, falling by three points to the playoff-bound Wildcats. Now, the Redskins will knock heads with a familiar old foe – although it’s kind of hard to believe that it’s been four years since these teams shared the same field. Anniston has had trouble slowing down better running games and Oneonta has shown the ability to move the ball with Colton Walker carrying the load. The Bulldogs have some playmakers – watch out for senior quarterback Marrio Dobbins (5’10, 165 Sr) – but the Anniston offensive and defensive lines have been pounded on almost every night this season. Dobbins threw for 154 of the team’s 189 yards last week so the running game didn’t get much push. Oneonta will have to get after Dobbins and make him uncomfortable but the senior can make plays when pushed out of the pocket.

Next week – Oneonta travels to 3A power Piedmont; Anniston finishes the year at Ft. Payne.

This is as big as big games get and Wildcat and Blue Devil fans have waited all year for this one.

Hayden piled up plenty of yards and points last week but the defense kept giving up plays to the Fairview passing game and the visitors just kept hanging around. The Wildcat offense will need to put together a complete effort again this week against a Mortimer Jordan defense that has not exactly been dominant. The offenses of Cordova, Corner, Briarwood and West Point were able to move the ball on the Blue Devils, especially on the ground. Mortimer Jordan will counter with an offense that is built around pounding UAB-commitment Spencer Brown (6’1, 225 Sr) behind an offensive line that averages 245 pounds. Brown managed just 96 yards last week at Curry but that came on four carries and he didn’t play in the second half. Brown will get plenty of touches this week and that means that Levi Snider and the rest of the Wildcats defensive front must be ready to play hard-nosed, physical football from the opening snap to the final whistle. Look for Hayden to test the outside of the Blue Devil defense with the speed of Leonard Johnson and Colton Shirley – and those two need to produce at least three big plays this week.