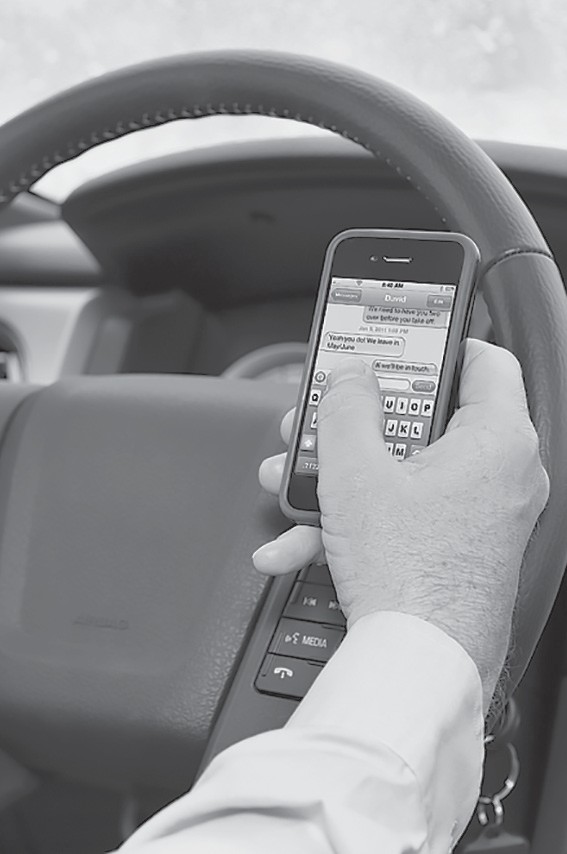 “If you are texting or on the phone and have a crash, it is not an accident – it’s a choice.”

These intense words offered to Oneonta High School (OHS) 10th-grade students last Wednesday by attorney and presenter David Dobson may be harsh, but they are definitely spot on.

As the students listened intently to Dobson and fellow attorney Jessica Powers, the students were also able to identify other distractions while driving such as adjusting the radio, putting on makeup, and eating.

Although most people believe that the highest rate of texting while driving occurs with teens, it has been determined that adults between ages 25–39 are doing so at a higher percentage than teens.

Powers encouraged the students to speak up and offer solutions when their parents or friends are being distracted while driving. One of the solutions offered included asking to answer the phone or text message for the driver.

While it does take courage to speak up and confront the distracted driver, she stressed that doing so could save lives, including their own.

In addition to texting or emailing, drivers running red lights, and those who drive after drinking or taking prescriptions pose the greatest threat to personal safety.

Powers, who primarily represents clients involved in distracted driving crashes, reminded students that they put much of their life on social media. She said, “Instagram, Facebook, and Twitter accounts are usually benign, but you are putting it out there – where you were and what you are doing.”

Powers pointed out that even earlier posts on social media could come back and haunt a person if the posts or pictures provide potentially damaging remarks or photos.

Many times, when representing her client, Powers pulls the phone records to help credit or discredit the person charged in the case. This process allows her to have access to date and times of phone calls and texts made and received, as well as applications accessed such as social media and email accounts.

She reminded the students that even if they are involved in a crash and are legally cleared of distracted driving, they might still face unfair stigma and gossip by the community, simply because of their age. This can be a very difficult curse to overcome.

Powers said, “Turn off your phone and put it in the back or in the trunk. Choose to put your phone away.”

Dobson offered these words of advice, “Put your phone down and focus on what you are doing – driving.”

The ‘End Distracted Driving’ presentation at OHS wrapped up visits to all county high schools by the law firm of King, Green, and Dobson.

Attorney Brett King said, “After wrecks resulted in tragic deaths and injuries last summer, our firm felt compelled to spend time talking with high school students about the dangers of distracted driving. We recognize these students are the future of Blount County, and if one accident can be prevented, our time has been well spent. The response from the students and faculty has been overwhelming and we thank the administration for allowing us this opportunity.”

The American Association for Justice sponsored the presentations.