‘Elvis Has Left the Building’ 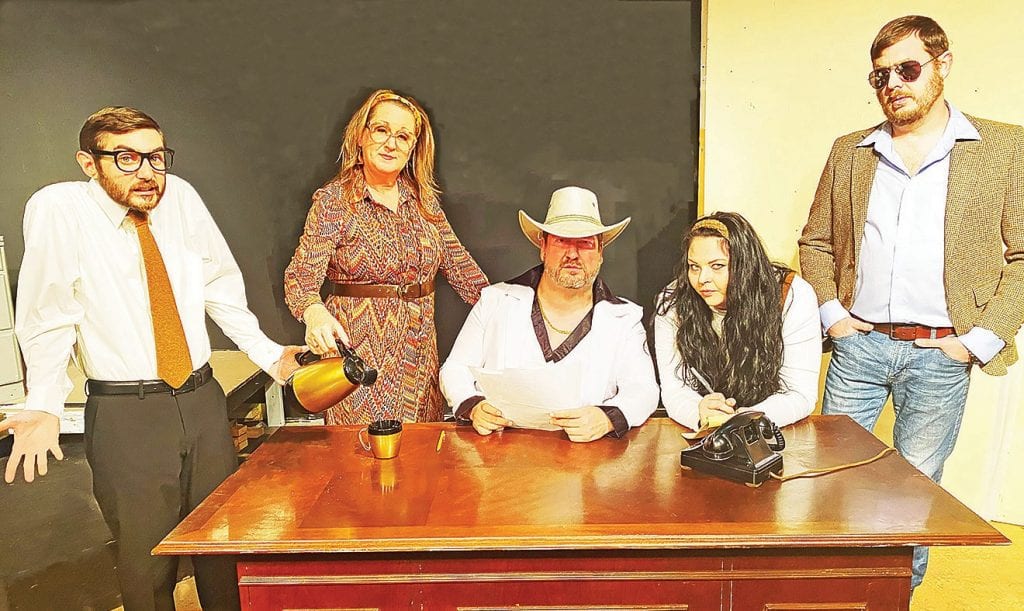 Has anyone seen Elvis?

This is the burning question that the Covered Bridge Players will attempt to figure out in the upcoming production of “Elvis Has Left the Building.” Written by V. Cate and Duke Ernsberger, the show’s synopsis goes like this…

“It’s Dec. 20, 1970 and Elvis Presley has disappeared. No one, not even his wily manager, The Colonel, knows of his whereabouts.But the Colonel is all shook up because he has racked up a secret debt – and with the King himself missing, the only way to pay it off is to find an Elvis impersonator within 24 hours. Hijinks ensue as the Colonel takes desperate measures to replace a man who is irreplaceable, all while keeping the prying eyes of a nosy reporter at bay and figuring out what happened to the real Elvis.”

Director Kevin Roland said, “Theatre really is a magical thing.You bring together people with very different backgrounds to take ownership of a story someone else wrote. And in the process, these very different people become something like family. They share highs and lows, excitement and frustration, and at the end of the show, bows and applause. They do it because they love getting to help people escape reality for just a couple of hours, and ‘Elvis has Left the Building’ is no exception to this. There are truly gifted and talented people in this cast, and I couldn’t be prouder of the work they’ve put in (with rehearsals during the holidays no less).”

Cast member Amy Nicole Singleton said, “Our passion at Covered Bridge Players is to bring homegrown entertainment to Oneonta, and ‘Elvis Has Left the Building’ is sure to keep the audiences entertained! It’s fun. It’s hilarious. It’s a classic comedy. I’m honored to be a part of this stellar, veteran cast, and I can’t wait for our audiences to see it! That’s the best part about working so hard on a show. When you finish a show, and you can see the audience had just as much fun watching as you did performing, you know you hit the right marks!

“And I’m really expecting ‘Elvis Has Left the Building’ to be that type of show. I always encourage people who haven’t been to see one of our shows, or maybe have never been to see a play ever, to give it a try. First timers are always stunned that we have a theatre in Oneonta that is producing high caliber shows, but it’s happening! So why not take a Friday night to go have some dinner at your favorite Oneonta restaurant and then come on down to Covered Bridge Players Theatre.

“We have a dynamite director in Kevin Roland. He has this amazing vision for every show he directs that he always brings to life! This is my first time working with him, and he is creating ‘Elvis Has Left the Building’ into an amazing show that will keep audiences laughing and cheering. I’m so glad I can now say I’ve been a part of one of his shows and seen his directorial talent firsthand.”

Singleton encourages everyone to follow the Covered Bridge Players’ Facebook page, as it is updated often and provides information about upcoming shows, prices, and what nights are sold out.