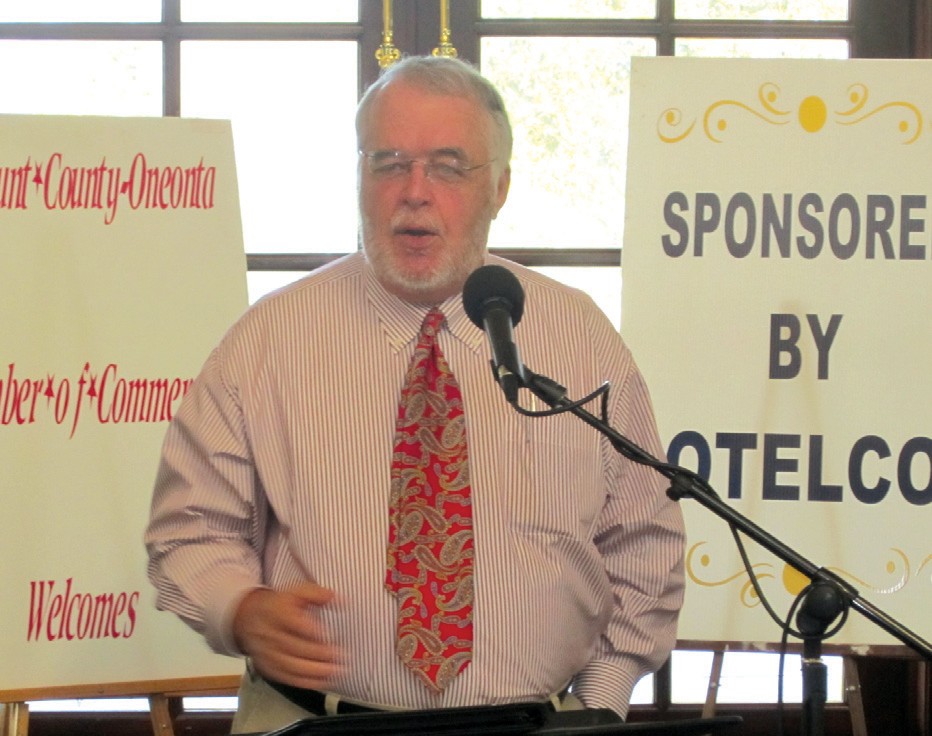 Larry Lee, former director of the Center for Rural Alabama, challenged the chamber and its members individually to become more directly involved in improving county education.

“There is simply no such thing as an outstanding community that has only average or below-average schools,” Larry Lee declared early on in his talk to chamber breakfast attendees last week. The aphorism “education precedes prosperity” flows directly from that realization.

Lee said he reached that conclusion after years of working in community and economic development in Alabama, followed three years ago by his assignment to find and study 10 high-performing, high-poverty schools in rural Alabama. The remainder of his talk buttressed and illustrated that theme.

He used Tupelo, Miss., to illustrate his proposition. He said Tupelo leaders decided over a half-century ago to upgrade the school system in order to attract high-paying jobs to the area. Today, per-capita income in Tupelo is 26 percent above the state average. Oneonta’s is 16 percent below this state’s average, he said.

Tupelo spends per student on education an amount that is exceeded in Alabama only by Mountain Brook, Vestavia, Homewood, and Hoover. Both systems in Blount County, he said, spend well below the state average for funding per student for city and county systems.

He said the Tupelo school system figured prominently in Toyota’s decision to locate an auto assembly plant just 12 miles away in Blue Springs. He said a 650-bed hospital, the largest in Mississippi, is located in Tupelo, with a population of only 37,000. These factors, plus its being named an All-American city for the third time recently, are all substantially attributable to the excellence of its school system, Lee suggested.

Lee said conditions in its schools act as a window on what a community thinks and how it feels about itself.

“Any time I walk into a school bathroom and it smells to high heaven, or meet an indifferent school secretary, or walk down halls that are unpainted and unkempt, my opinion of that community immediately drops,” Lee said. “I ask you, if you don’t care about your kids, what do you care about?”

Lee’s prescription for improving schools included thinking of more ways to celebrate students’ success with creative forms of recognition and getting parents and elected officials to spend time in school classrooms so they know the conditions teachers face. He suggested the chamber sponsor a “teacher for a day” program when community leaders and elected officials spend a day working as teachers’ aides to become familiar with conditions in the schools.

That would be one way of dealing with people who berate educators for the terrible job they’re doing, then turn around and “beat their chests” shouting that the U.S. is the greatest country on earth.

“How did we get to be so great if our schools and teachers are so bad?” Lee asked. “Isn’t that like Nick Saban telling us that his quarterbacks can’t throw, his receivers can’t catch, and his running backs can’t outrun their sisters – yet he thinks his team will go undefeated in the Southeastern Conference and win the national championship?”

Lee’s last point addressed overemphasis on student performance on national standardized tests. He said master teachers are denied the opportunithy to do what they know should be done, the joy of teaching and learning is lost, and socalled reformers keep conjuring up magic potions to fix education without listening to the real experts who are struggling in classrooms and running schools.

He told two stories about recent conversations with young people around the state. In one instance a Judson College student preparing to graduate said she would begin looking for a teaching job soon – but not in Alabama. “Why not?” Lee asked.

“Because the Legislature here does not like teachers, and because they had just cut salaries and eliminated more than 1000 teaching jobs,” she said.

Whether her facts were right or wrong doesn’t matter, Lee said, because her mind was made up. And the Legislature has a perception problem.

On another occasion when he was talking to a number of advanced placement high school students, the question was posed as to whether any of the group would consider becoming teachers. Two of the girls spoke up, saying there’s no way they’d ever subject themselves to what their teacher mothers have to go through.

“This is a tragedy,” Lee concluded, “and one we will all pay for. So I plead with you to get involved with your schools, visit a classroom, work with the educational foundation, celebrate success, and go out of your way to hug a teacher.”

The chamber breakfast was sponsored by Otelco, which announced that the company had just acquired some new companies and that they now operate in both the Southeast and New England. Oneonta is the firm’s headquarters. It employs about 100 in Blount County.

About 125 people attended the monthly breakfast at Twin Oaks at Heritage Golf Course.