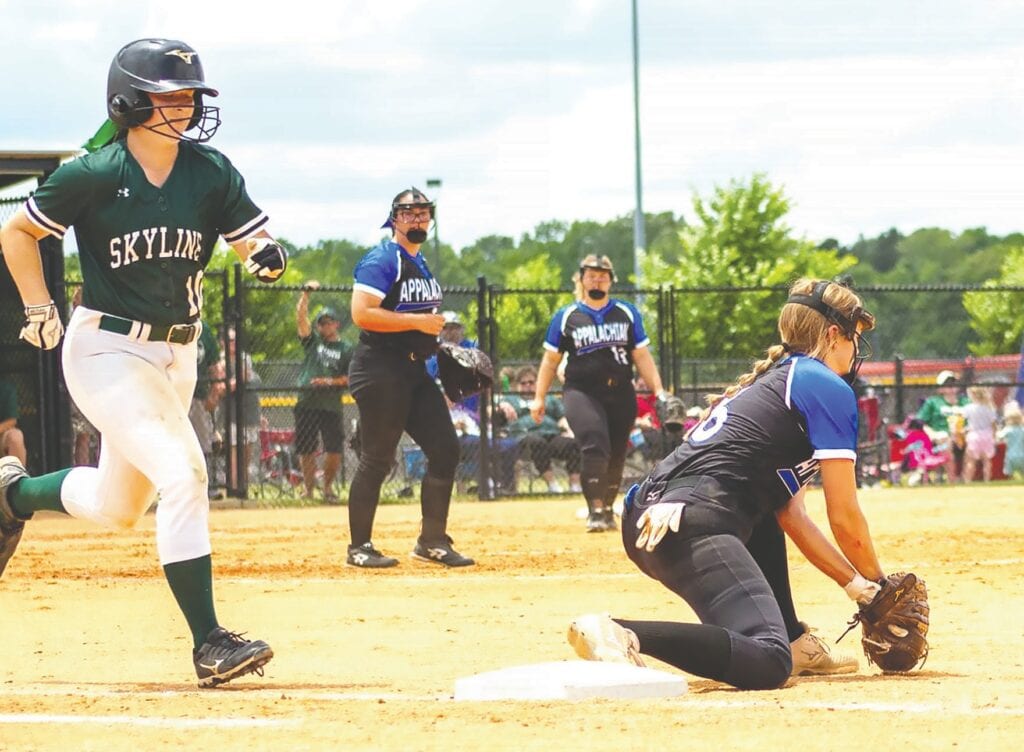 Appalachian first baseman Sophie Latta scoops a throw to get the out against Skyline during the Eagles’ state tournament semifinal game. -Traci Price | School Sports Photography

Two years ago, these Lady Eagles laid a foundation for the future of Appalachian’s softball program. It was 2019; they finished the regular season ranked sixth in 1A, won their area and regional tournaments, and made school history becoming the first team to make it to the AHSAA state tournament. There wasn’t a senior on the team.

In 2021, those same Lady Eagles finished the regular season as 1A’s fourth-ranked team, 1A Area 11 Champions, and 1A East Regional top qualifier going 3-0 in Montgomery. Led by seniors Kylee Davis, Jordan Henderson, Zoe Payne, Amanda Richelderfer, and Taylor Woodard, the 2021 Lady Eagles soared to new heights as they made their way through the AHSAA 1A State Softball Tournament.

Appalachian opened the tournament with a 7-5 win over Pleasant Home. Neither team scored in the first inning, but Peasant Home put two runs on the board in the top of the second. The Eagles answered in the bottom half of the inning when Kaylan Martin scored from first after the catcher mishandled Trinity Day’s bunt attempt. 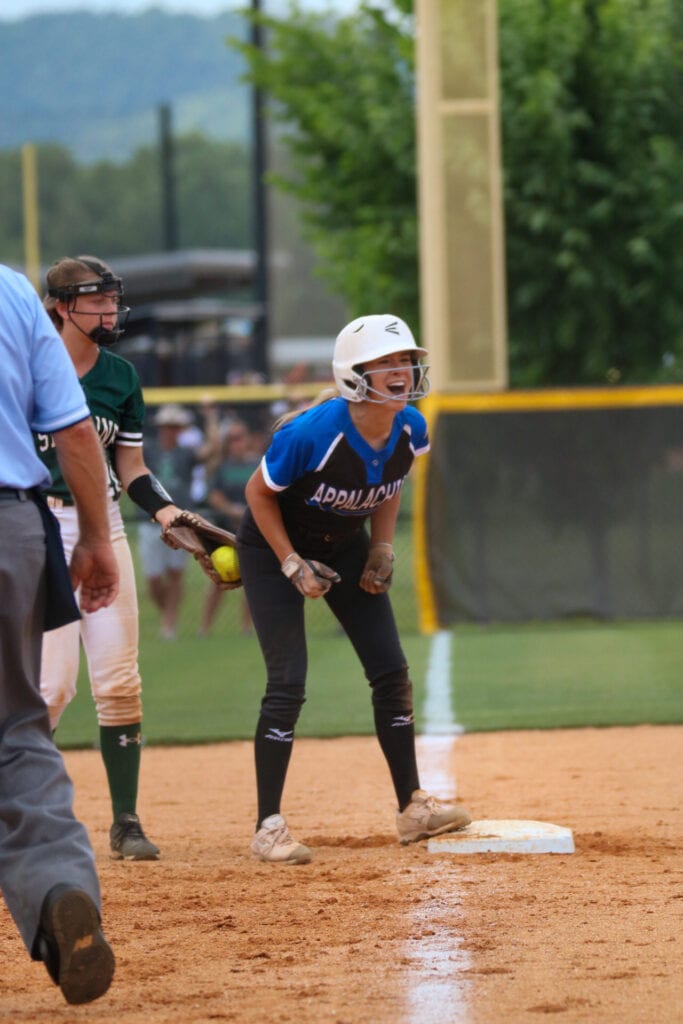 Pleasant Home made it 3-1 after adding another run in the third, but the Eagles turned up the heat in the bottom half of the inning scoring five runs to take the lead. With one out, Taylor Woodard tripled on a fly ball to center and Stormy Stidham reached first on an error by the pitcher. Zoe Payne then cleared the bases on a bomb to center field to put the Eagles on top 4-3. With two outs, Martin singled on a fly ball to right field, advanced to third on Sophie Latta’s grounder to right field, and scored on an error by the third baseman. Latta made it 6-3 scoring on Day’s flyball single to left field.

Both teams added a run in the fourth. Gracey Gulledge led off with a double on a fly ball to right field. She advanced to second after Woodard was hit by a pitch and made it to third on a sacrifice from Stidham. Payne drove her in to make it 7-4. Pleasant Home put one more run on the board in the fifth to make it a two-run game, but that’s as close as they got. The Eagles held on for the 7-5 win. 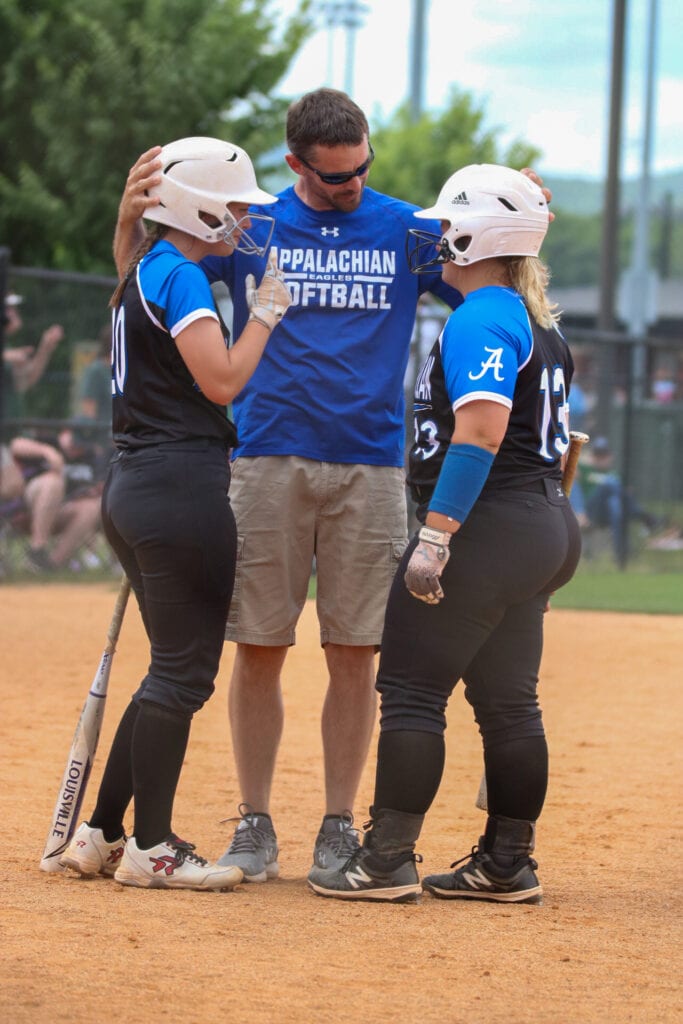 Ashley Maddox started in the pitcher’s circle. She earned the win allowing five runs on five hits. Richelderfer came in for the final two outs, earning the save. Payne and Martin went 2-for-3 to lead the Eagles at the plate. Payne’s four RBIs also led the team. Woodard, Latta, Day, and Gulledge each collected one hit.

The win over Pleasant Home set up a round-two match up with Holy Spirit Catholic, who beat Belgreen 3-0 in their opening game. The Saints took the lead 1-0 in the first inning and added another run in the third for a 2-0 advantage. 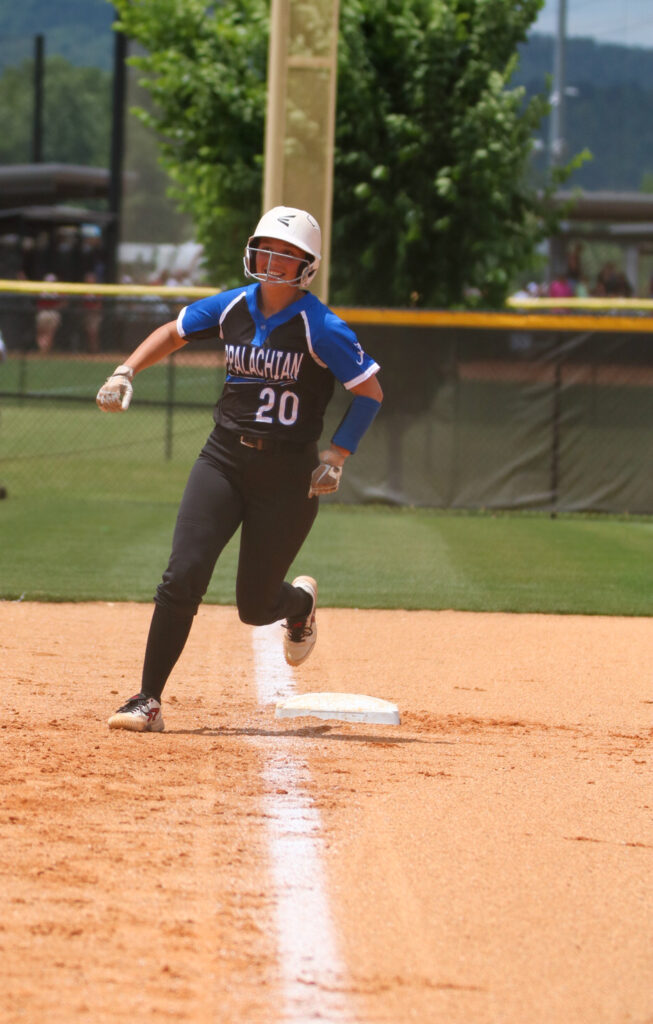 Appalachian held the Saints scoreless for the final two at bats for their second win of the day. Maddox went seven innings for the win. She gave up two runs on eight hits and struck out six. Henderson went 2-for-3 with three RBIs and one run to lead the Eagles at the plate. Woodard, Payne, and Maddox had one hit each.

With their second win of the tournament, these Lady Eagles advanced to the third round of the winner’s bracket, making history yet again as the first team to win two games in the state tournament. It also set up a game with 1A’s top team, Brantley.

The Eagles jumped out to an early lead scoring two runs in the bottom of the first. With one out, Stidham walked, advanced to third on Payne’s flyball single to right field, and scored on an error by the third baseman. Payne scored from first on the same error to put the Eagles up 2-0.

Brantley got on the board in the top of the second and added three more in the third to take a 4-2 lead. Neither team could get runners home over the next three innings, but the Bulldogs put three on the board in their last at bat to extend their lead 7-2. The Eagles got one runner in the bottom of the inning, but fell to Brantley for their first loss of the tournament.

The Eagles still had a shot at the title, though. They moved to the losers bracket to face third-ranked Skyline for the chance to face Brantley in the 1A title game. Appalachian started strong scoring two runs in their first at bat. With two outs, Henderson homered to deep center scoring Payne for a 2-0 lead.

Skyline got on the board in the top of the third to tie the game 2-2. In the bottom of the inning, Appalachian took the lead back. Woodard led off with an infield single and advanced to third on Payne’s ground-ball double to left field. Henderson’s walk loaded the bases. A sacrifice from Latta brought in Woodard. Martin then singled on a fly ball to right field to score Payne and Henderson. Day followed Martin with a walk putting runners on the corners for Maddox who singled on a hard grounder to right field scoring both Martin and Day to put the Eagles up 7-2.

In the bottom of the fourth, the Eagles added to their lead after Woodard led off with a line-drive triple to center field and scored on a sacrifice hit from Gulledge. Skyline cut the lead in half scoring two runs in the fifth. They made it a one-run game after scoring three in the sixth. In the top of the seventh, Skyline took the lead scoring six runs to give them a 13-8 win.

Maddox pitched six and two thirds giving up 11 runs (five unearned) on 14 hits. Richelderfer pitched one-third giving up two runs. Woodard, Payne, and Martin led at the plate with two hits each. Martin, Henderson, and Maddox each had two RBIs.

The loss sent the Eagles home one game shy of their goal, but this group of girls made it further than any team and leave a lasting legacy on Appalachian’s softball program. These Lady Eagles were one of the last three 1A teams standing. They fought hard all season, against their opponents and the elements, as they made their run toward a state championship. They finished their season 24-9. The future is bright for Appalachian softball.