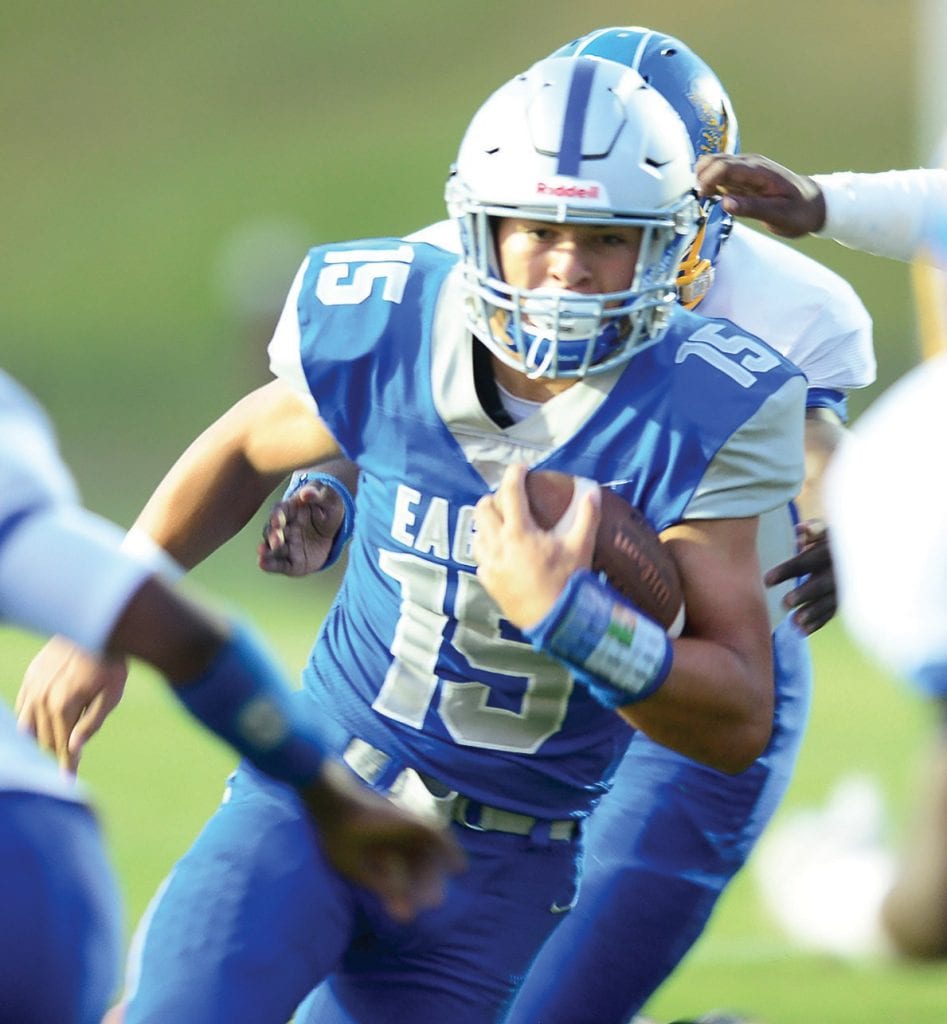 The Appalachian Eagles faced the Talladega County Central Fighting Tigers Friday, winning by a score of 44-6.

Appalachian struck first with a touchdown run from Chase Payne three minutes into the first quarter, giving the Eagles a 6-0 lead over the Tigers. The Eagles scored again at the end of the first quarter on a 40-yard touchdown pass to Gabe Smith from Noah Harris, extending the Eagle’s lead to 14-0 after a successful two-point conversion.

The Fighting Tigers punched back, returning the next kickoff for a touchdown, making the score 14-6. The Eagles answered not long after with another touchdown run from Payne early in the second quarter, making the score 21-7. A few minutes later, kicker Brandon Atkinson slipped the ball through the uprights to extend the Eagle’s lead 24-7. On the Tiger’s next drive, Appalchian’s Jake Hammond found the ball in his hands after intercepting a pass from Talladega County, which he took all the way back for an Eagles touchdown, making the score 31-6. The Eagles would score once more before the half. Chase Payne found the end zone for a third time with seconds to go in the second quarter, giving the Eagles a 38-6 lead at the half. 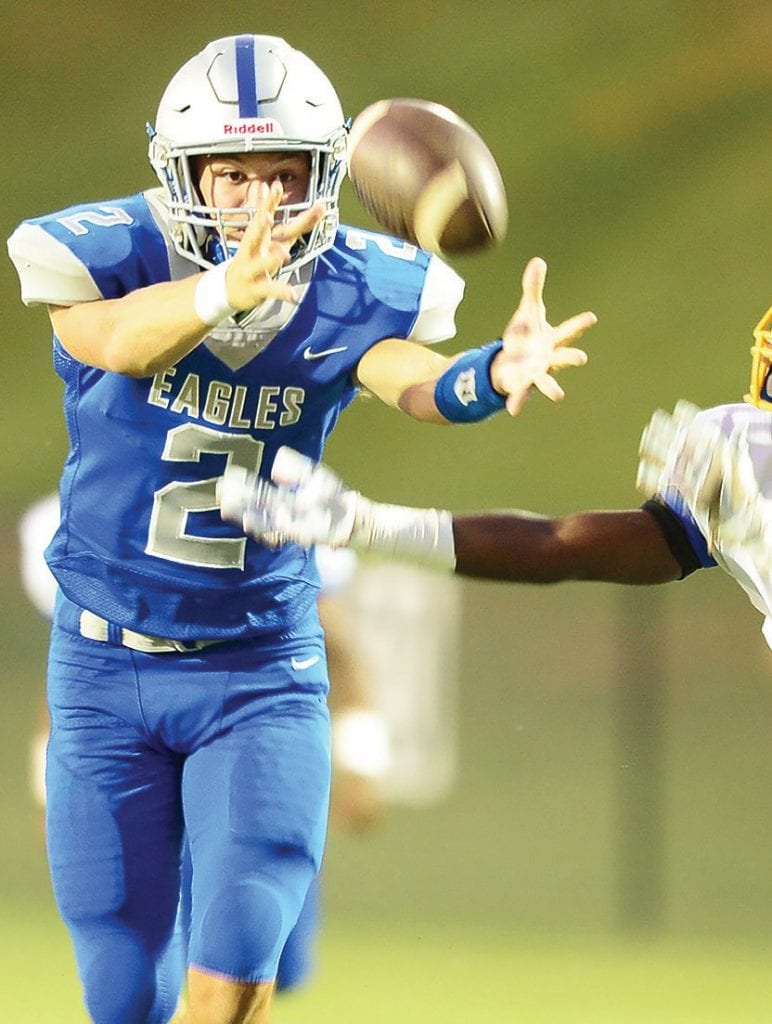 Noah Harris (2) had 203 total yards and one touchdown on 11 completions and five rushes. -www.southernexposurephotos.com

The Eagle’s defense battled it out with the Talladega County offense in the second half, allowing no points in the third or fourth quarters, while adding six points on offense with two more field goals by Atkinson, bringing the Eagles to a 44-6 victory.

Offensively, Payne led the Eagles’ ground game, running 19 times for 103 yards and three touchdowns. Noah Harris went 11-for-19 for 189 yards and a touchdown, while rushing five times for 14 yards. Smith caught four passes for 90 yards, leading the team through the air. Hammond had four receptions for 64 yards, and Aiden Driggers caught two passes for 27 yards. Atkinson went 3-for-3 on field goals, and 3-for-4 on extra points.

Defensively, Hunter Conn led the Eagles with 10 total tackles. Payne recorded eight tackles. Bryson Seawright and Smith recorded seven tackles each. Alex Heard had six tackles, Sam Gunter had five tackles, and Garrett Helms recorded four tackles as well as an interception. Hammond had three tackles and an interception, which he returned for a touchdown. 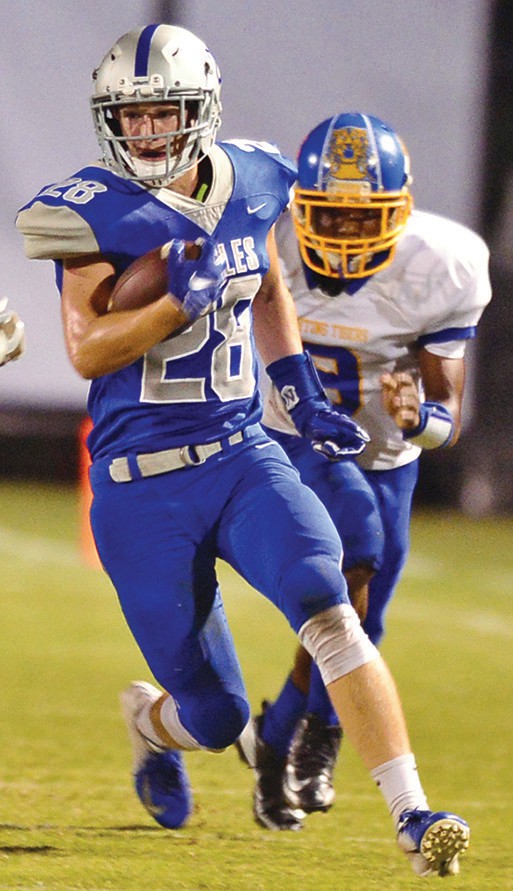 Jake Hammond (28) had a pick six as well as four receptions for 64 yards. -Keith Standridge

The Eagles are 3-0 on the season. They hope to continue their winning streak Friday as they travel to Victory Christian. 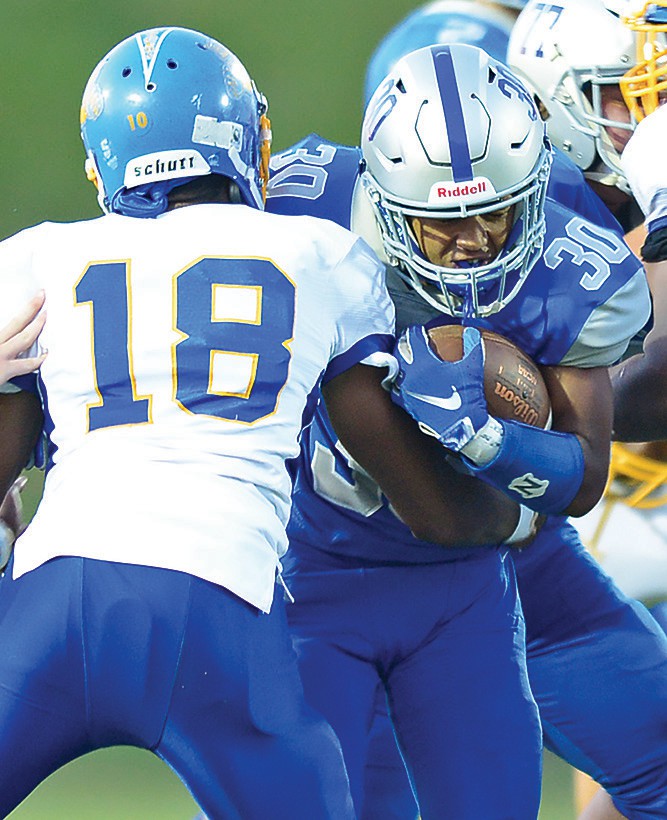