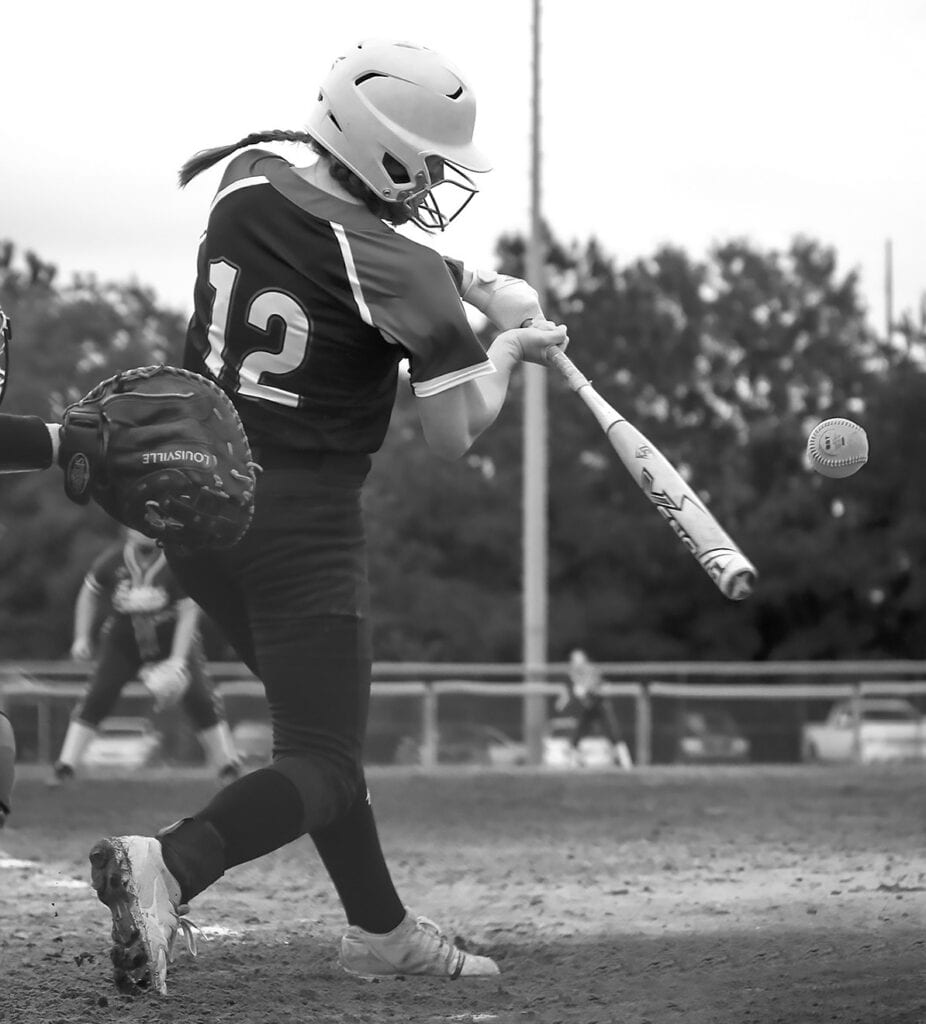 Hot bats in the third and fourth innings got the Eagles off to a great start at regionals with a blowout win over Gaylesville in four and a half innings.

In the Eagles first at bat, Taylor Woodard reached base on a fly ball double to right field, and then scored on a sacrifice fly by Stormy Stidham. In the second, Kaylan Martin singled on a ground ball to third, advanced to second on a bunt by Sophie Latta, and scored on Trinity Day’s single to left field to put the Eagles ahead 2-0.

Jordan Henderson started a two-out rally in the third inning by drawing a walk on a 3-2 count. Martin reached on a ground ball error to the shortstop that scored Henderson. Latta singled and then Martin scored on a wild pitch. Day reached on a dropped-third strike that scored Latta. Ashley Maddox was then hit by a pitch as the inning continued to go in the Eagles’ favor. Grace Benson was brought in to run for Maddox. Day and Benson both scored on errors putting the Eagles up 7-0. 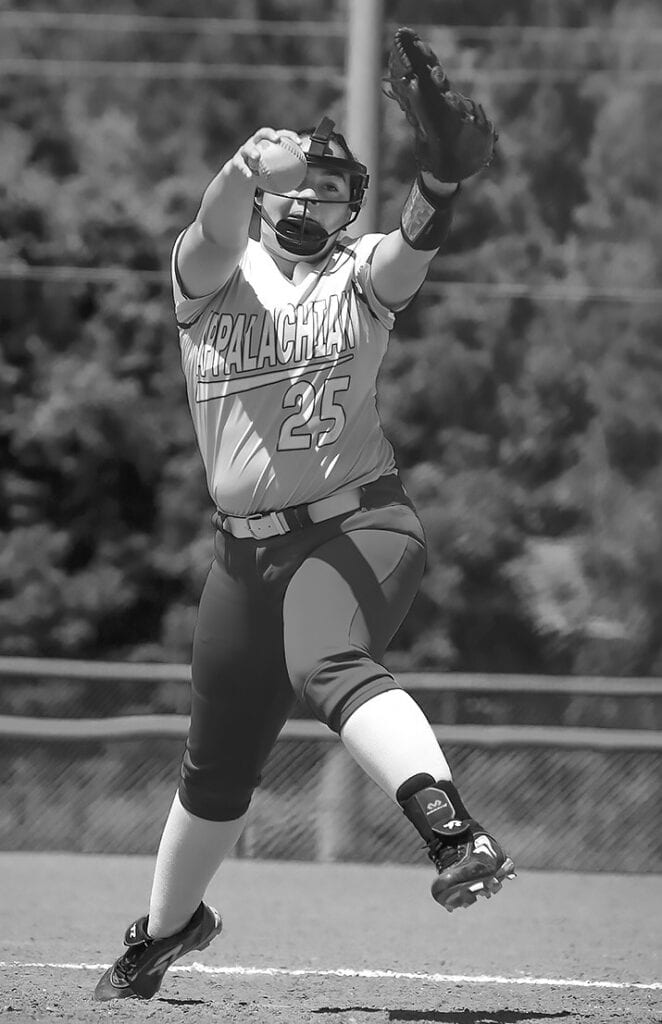 Errors continued to plague Gaylesville in the bottom of the fourth with Stidham and Zoe Payne reaching on errors, while Henderson walked. A single by Martin scored two. Day reached after being hit by a pitch to load the bases again. Amanda Richelderfer scored Henderson on a fielder’s choice. Benson was brought in to run for Richelderfer. Bases were once again loaded when Gracey Gulledge became the third Eagle batter to be hit by a pitch. Woodard singled to left field to score Benson and Day making it 12-0 at the end of four.

Appalachian jumped out to an early lead to secure a 9-2 win over the Woodland Bobcats. A double by Payne in the first inning drove in Woodard to put the Eagles on the board. Woodland answered by loading the bases and scoring two runs, but the Eagles turned on the gas in the second inning and never looked back. 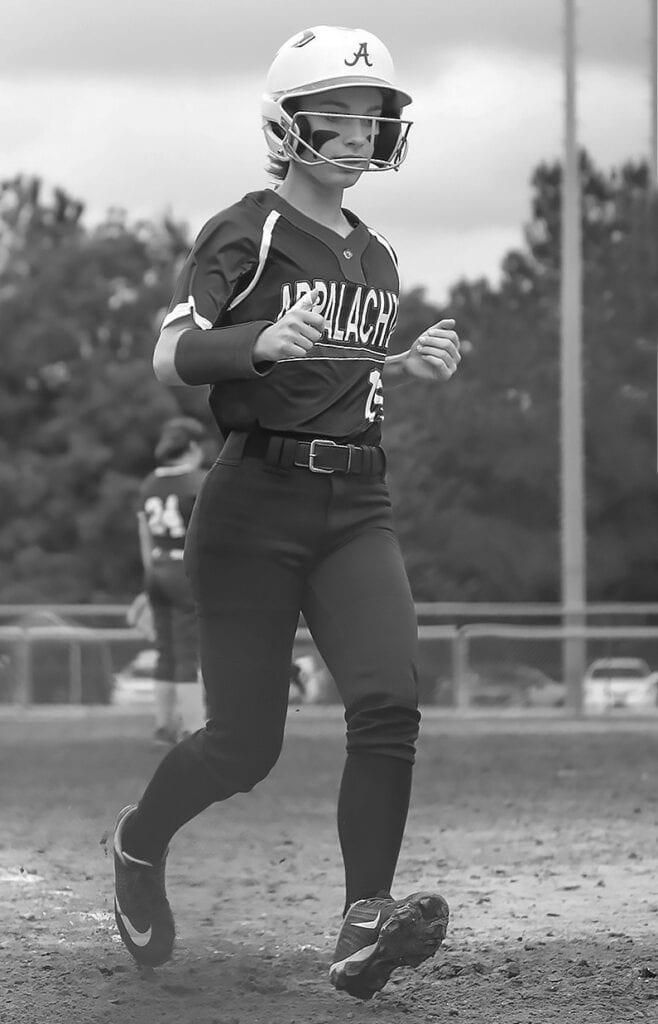 Appalachian’s Stormy Stidham crosses the plate against Cedar Bluff. Stidham finished the game with one hit and one RBI. -Mandy Moore Photography

Latta and Day both reached on singles. A beautiful sacrifice bunt by Maddox advanced the runners to second and third. Both scored on the next play when Gulledge singled to center field. Gulledge, Woodard, and Payne all went on to score in the inning putting the Eagles up 6-2.

A strike out, quick thinking by Maddox to take out the lead runner on an attempted sacrifice bunt, and an on-the-money throw by catcher Payne to catch a runner trying to steal second ended the Bobcats’ hopes of scoring in the second.

Stidham scored on a wild pitch in the fourth. While Henderson and Martin had back-to-back home runs in the sixth to put up the final runs.

Payne, the Eagles’ catcher, had an excellent game picking off a runner on first and throwing out an attempted steal at second. She also led the Eagles at the plate going 2-for-5 with three RBIs. Maddox earned the win surrendering two runs on 10 hits over seven innings, striking out six, and walking zero.

The Eagles found themselves on the hot seat during the third and final game of regionals, but pushed through to come out on top and earn the first Regional Qualifier spot from the East bracket.

Appalachian got on the board in the first with runs from Woodard and Payne. Woodard scored on Henderson’s fly ball single to left field and Payne scored when Kaylan Martin grounded out to the shortstop. Cedar Bluff answered with two home runs.

Day scored in the second when Maddox bounced one off the center field wall. Benson entered as the courtesy runner for Maddox and scored off a single by Woodard who also went on to score putting the Eagles up 5-2. Cedar Bluff fought back with a two-out rally that scored five to give them a 7-5 lead.

The Eagles fired back with two runs from Benson and Day to tie the game up again in the top of the third. Richelderfer entered on a pitching change to start the bottom of the third inning. Cedar Bluff refused to go down quietly scoring two more runs on another two-out rally for a 9-7 lead. The Eagles buckled down, though, and stopped the Tigers from putting any more runs on the board. A strike out and a pop fly double play by Payne sat Cedar Bluff down in the fourth.

In the fifth inning, Appalachian mounted their own two-out rally scoring five runs. Richelderfer, Gulledge, Woodard, Stidham, and Payne all singled to tie the game at nine apiece. Henderson then stepped up to the plate and sent one yard scoring another three runs to put the Eagles on top 12-9. Richelderfer then sat the Tigers down with a strikeout, a ground out, and a fly out.

Maddox reentered the game in the sixth inheriting a runner on first base. She got two quick strikeouts and the third out came on a throw out at first on a line drive that hit Maddox’s glove and was still thrown to first in time to get the Eagles out of the inning.

In the seventh inning, Payne hit a ground ball to the third baseman who committed an error that allowed Gulledge to score and gave the Eagles 13 runs. The Tigers were unable to answer hitting into two ground outs and a pop out leaving two on base.

Richelderfer earned the win for the Eagles pitching three innings, giving up two hits and two runs, striking out two, and walking four. Maddox got the save. She pitched four innings, allowing nine hits and seven runs while striking out four and walking two. After nearly three hours of play, the Eagles emerged as the top Regional Qualifer for the East Region. Cedar Bluff went on to earn the second and final qualifier from the East Region.