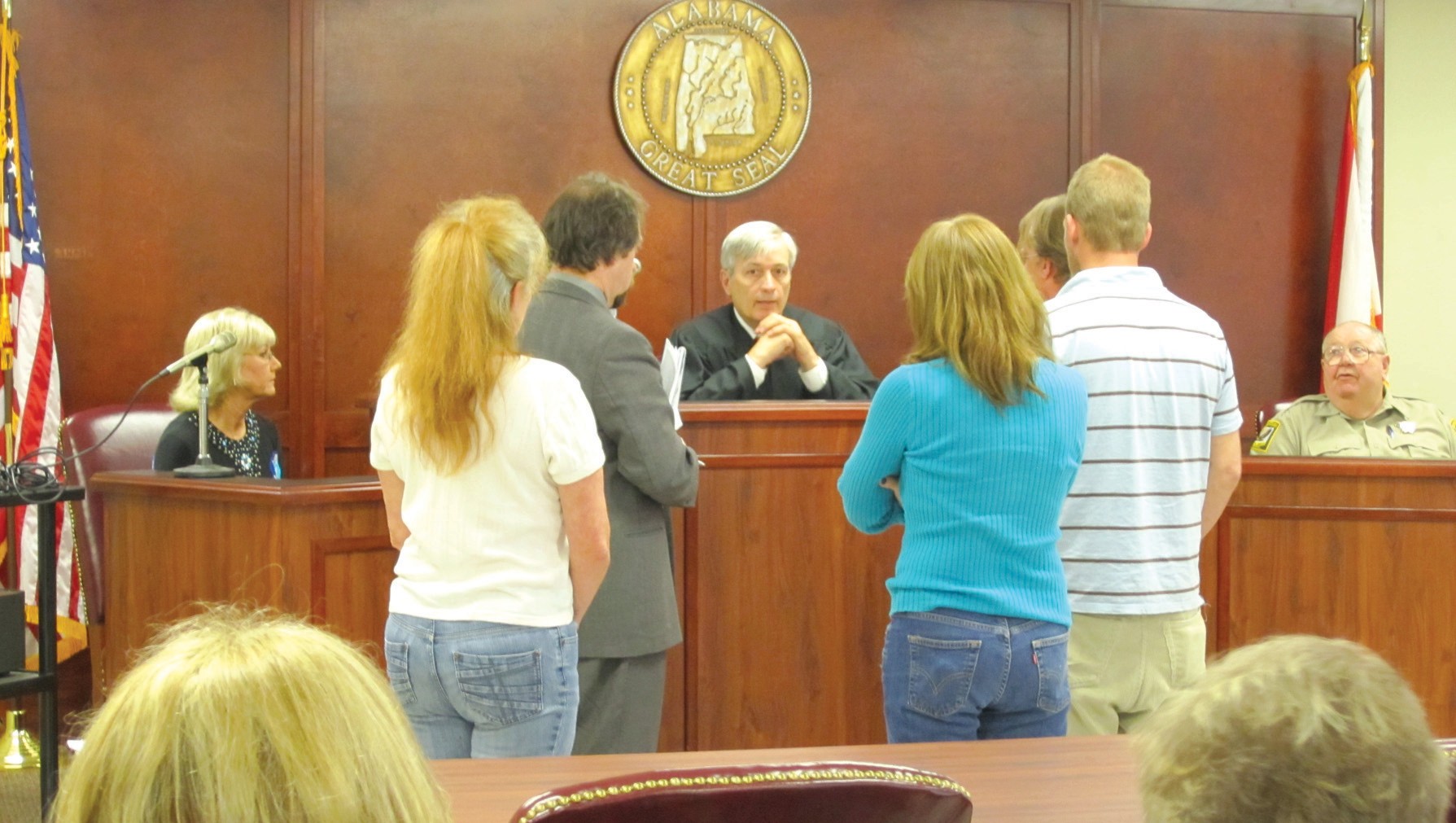 Drug court clients appear weekly before drug court Judge John Dobson to report on the week’s results and progress. Sometimes the subject is more serious, like this hearing, attended by family members, on referral to a longterm treatment facility.

Drug court made its full-fledged appearance in Blount County in mid-2010 when Judge John Dobson retired from the district court bench and immediately accepted the position as head of the drug court formed shortly thereafter under his auspices, with community corrections head Daryl Wheeler as overall coordinator.

The move cleared a longstanding logjam in launching drug court in Blount County, and the innovative program moved forward.

By late September, administrative and physical arrangements for drug court were in place at the Family Service Center, and drug court began functioning with its complement of eight to 10 participants. Currently, the program includes about 20 clients, 15 of them in Phase I and five in Phase II, with three or four in pre-entry status.

Drug court represents somewhat of a new concept on the criminal justice scene for the county: a system whose first priority is to rehabilitate drug offenders and return them to the society in a condition – perhaps better than ever before – to assume their roles as productive workers, solid citizens, and responsible family members.

Not every offender – called client once accepted into the program – succeeds. The court understands that and is prepared to return those that fail to the traditional justice system to serve the sentence that the offender originally faced when accepted into the drug court program. But the court and its workers strive to give clients a real chance to succeed, and indications are that many will, though the initial results will begin to become available only after the first full year of operation.

The drug court formula is based on a model of sustained, intensive interaction with clients in multiple settings weekly: classroom, group discussion, drug screening, community service work, personal interview, and court appearance. The newspaper’s initial article on March 9 outlined the six or more appearances per week that form the basis of the drug court program and constitute the foundation for its success.

This article will outline eligibility for the drug court program, the phases through which it progresses over the course of a year or longer, the requirements for graduation, and the reasons why termination may be occasionally necessary when clients fail repeatedly to comply with program requirements. Eligibility and entry

Drug court is designed for offenders who have committed their offenses in relation to drug abuse, addiction, or use. It is specifically intended to allow first-time offenders a chance to turn their lives around. Not eligible are those who are charged with violent offenses, who are charged with or have a prior conviction for unlawful distribution or manufacture of a controlled substance, who suffer from mental incapacity, who have two or more felony convictions, or who are under 17 years of age. Eligibility is limited to Blount County residents except in special circumstances, and excludes those on probation in another jurisdiction.

The drug court program consists of four treatment phases following the intake process. Offenders may withdraw at any time up to entering Phase I. After entry, the client is not permitted to withdraw but may be terminated. Phase I: 12 weeks minimum. Client must –

stay sober, neither drink nor use drugs.

appear in court every other week.

report to case manager every other week.

perform 50 additional hours of community service over next three phases.

appear in court every three weeks.

appear in court every four weeks.

Complete at least 100 hours of community service, more if ordered.

Maintain sobriety for 12 months prior to graduation.

Obtain a GED, if required.

Pay all court fines and/or restitution.

Complete all four phases of the treatment program.

Have no contact with persons who possess firearms or may be engaged in criminal activity.

Have no contact with drugs, drug sales, or drug use or persons who may be engaged in same. Termination

As of this writing, no clients have been terminated from the program, but the possibility of termination hearings has been discussed in connection with three or four. Drug court guidelines specify four causes for termination:

The client receives a new criminal charge while in the program.

The client consistently tests positive for drugs and efforts to assist him or her – including referral to a longterm treatment facility – have been exhausted.

As a practical matter, most clients seem to fail simply from unwillingness to make the effort to straighten out their lives. Most common is the failure to appear at required drug court venues to engage with the treatment and rehabiltation process. Another common pattern is for those seriously addicted to resist referral to long-term treatment. It’s as if the clients’ worst enemies are themselves.

There’s a sense of reluctance, though little disagreement, among drug team members when the subject of termination intrudes during the discussion of cases. The progress of each client from week to week is documented in his or her profile for the weekly court docket. The record, for the most part, speaks for itself. After a termination discussion– with an unexpressed but somehow palpable sense of regret – team members move on to the next case. Drug court effectiveness

The material below is quoted from “Research Update on Drug Courts” published in the newsletter of the National Association of Drug Court Professionals.

“More research has been published on the effects of adult drug courts than virtually all other criminal justice programs combined…In each analysis, the results revealed that drug courts significantly reduced re-arrest or reconviction rates by an average of approximately 8 to 26 percent, with the ‘average of averages’ reflecting approximately a 10 to 15 percent reduction of recidivism (defined as the recurrence of criminal behavior.)… Approximately three-quarters of the drug courts (78 percent) were found to have significantly reduced crime, with the best drug courts reducing crime by as much as 35 to 40 percent…In addition to significantlly less involvement in criminal activity, drug court participants reported significantly less use of illegal drugs and alcohol…drug court participants also reported significantly better improvements in their family relationships, and non-significant trends favoring higher employment rates and higher annual incomes.” Cost effectiveness

“A recent cost-related meta-analysis concluded that drug courts produce an average of $2.21 in direct benefits to the criminal justice system for every $1.00 invested…When drug courts targeted their services to the more serious, higher-risk offenders, the average return on investment was determined to be even higher: $3.36 for every $1.00 invested.

“The savings reflect measurable cost-offsets to the criminal justice system stemming from reduced arrests, law enforcement contacts, court hearings and use of jail or prison beds. When more distal cost-offsets were also taken into account, such as savings from reduced foster care placements and healthcare service utilization, studies have reported economic benefits ranging from approximately $2.00 to $27.00 for every $1.00 invested. The result has been net economic benefits to local communities ranging from approximately $3,000 to $13,000 per drug court participant.”