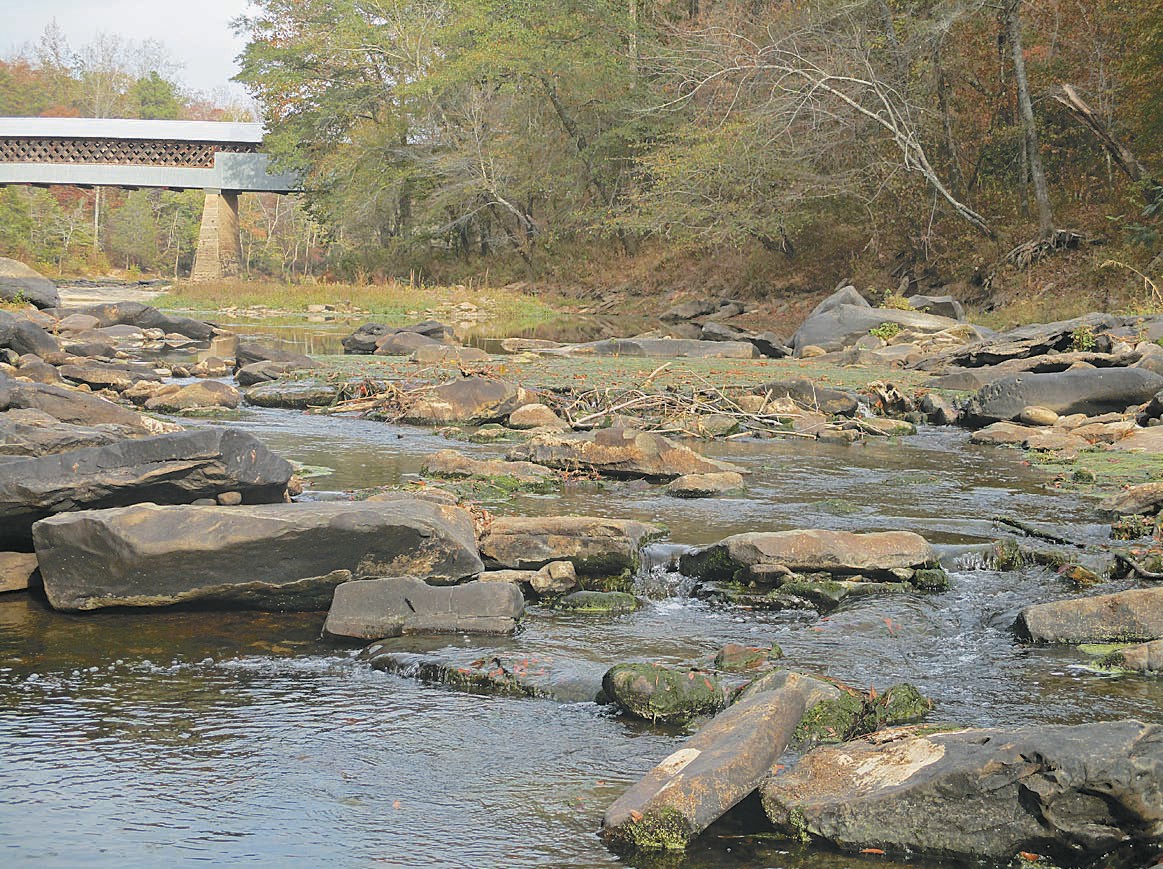 White water river? The day this photo was taken just below Swann Bridge, the river’s flow rate was 3.9 cubic feet per second – about 30 gallons a second. What you see here, where the channel narrows down to about 12 feet in width, is about 90 percent of what could be seen flowing downstream by the naked eye. The river has recently dipped twice to record low levels. The National Weather Service predicts drought conditions will persist here through Jan. 31, 2017.

It’s historically dry. Reports on creeks all over the county say that they have dried up, many completely so and some into potholes that are still shrinking. The Locust Fork River and Mulberry Fork are still flowing, but just barely.

The lowest rate of flow in 73 years of keeping records on the Locust Fork – until recently – was recorded at 2.3 cubic feet per second in the fall of 1954. It has dipped below that twice this fall – on Oct. 9 and again for two days between Oct. 21 and Nov. 2. There’s 7.8 gallons of water in a cubic foot, so less than 2.3 cubic feet means less than 18 gallons of water per second was the volume of water moving through the Locust Fork River channel on those days.

The rate of flow at Cleveland this past Sunday, Nov. 6, was measured at 3.9 cubic feet per second. The average rate of flow for Nov. 6 over the 73 years of record-keeping is 250 cubic feet per second. In other words, on Nov. 6 over the years, you could expect there to have been more than 60 times the amount of water on the average flowing down the Locust Fork at Cleveland than was there this past Sunday. Purists might haggle with the arithmetic, but the basic generalization would be hard to challenge.

“I’ve lived here (by the river) for 30 years, and it’s the lowest I’ve ever seen it,” said Sam Howell, Friends of the Locust Fork member and former president. “ My neighbors, who have lived here a lot longer than I have, say the same thing. “

Howell said the river is still flowing where he lives (near Plantation Golf Club) but not very much. “There are pools here and there where you could float a canoe a little way, but you couldn’t go far,” he said. News flash: lack of rain ‘fuels’ drought

Considering Blount County rainfall, stream conditions should come as no surprise. Data in the chart on page 3 have been summarized from weather stations located throughout Blount County. For 2015 and 2016, the numbers shown are averaged from six stations: three in the Oneonta area, two in West Blount and one in Blountsville. Data from years 2010 – 2014 are averaged from three stations: one in Oneonta, one in West Blount, and one in Blountsville.

What the chart doesn’t reflect is how little rain has fallen in the last two months. The six stations included averaged only a little over 1/2- inch for both months combined, with three stations showing no rain or only a trace in October.

It seems entirely possible that county rainfall could total less than 40 inches – as much as or more than 16 inches less than the annual average – for the first time ever this year, if present trends continue. Roads split open

District 1 Commissioner Allen Armstrong and District 3 Commissioner Dean Calvert both report that even the roads are being affected by the drought.

“The roads are cracking open almost like an earthquake has hit’em,” Armstrong said, “both asphalt and tar and gravel roads. The cracks are wide enough to slide your hand down into and some are 100 feet long and longer. It’s affecting even roads that we’ve just recently repaved. And as for creeks, we don’t have creeks any more – just ditches full of rocks,” he said.

Calvert concurred. “It’s gotten so dry for so long, the soil has no moisture and starts to shrink. That makes the roads crack, and the cracks become the starting places for potholes. You usually think of water causing potholes, but lack of moisture causes them, too,” he said. Agriculture

County agent Dan Porch wrote on Oct. 19, “this has to rank in the top two or three worst drought events to hit our area in the last 50 years. “ He continued to say that it has affected all row crops, reducing yields to about 25 percent below what is normally expected. It has delayed planting of annual strawberries and late-season vegetable crops. Hay fields and pastures have also been substantially affected and “lack of rain delays the planting of winter grains and over-seeding pastures, which compounds the situation,” he wrote. Bottom line: cattle growers are facing tough decisions about reducing herds and/or buying additional hay to get them through the winter. Paradox wrapped in an enigma?

An unexpected discovery in reviewing Locust Fork River flow data was its unusual variability. For example, flow rates for three successive days were 4.4, 3.9, and 5.4 cubic feet per second, during a period when no rain fell in Blount County. Why would the flow rate decrease, then increase, when no rainfall occurs in the upstream watershed?

The Blount Countian consulted with Mitch Reid, program director with the Alabama Rivers Alliance, for insight on the question. “We’ve been wondering about that, too,” he said. “We’ve seen that unusual pattern occur a number of times, and it’s not what you’d expect. In a dry season like now you would expect to see the flow continue to decline as long as there’s no rainfall to cause it to recover. What it suggests is that there’s water usage upstream – some users perhaps pumping water from the river occasionally to irrigate or to fill up ponds used for watering chickens or livestock. When the drought gets this serious, somebody’s got to call balls and strikes on water use that could affect the ecology of the whole watershed,” he said. He added that in Alabama there is no “umpire” or agency designated to monitor and protect streams from improper usage. Around the state

Emergency drought declarations were made by the state Office of Water Resources for 28 Alabama counties, including Blount, on Oct. 18. On Nov. 1, 18 more counties were added to the emergency drought list by the same agency, bringing the total to 46 of the state’s 67 counties. On Monday this week, the Governor expanded the drought emergency declaration to all 67 counties. The “no-burn” order that accompanies the emergency declaration now covers the entire state. Blount County is split just about in half by the two worst drought conditions – extreme and extraordinary– with the east half being the worst, as it spreads progressively westward.

Besides many creeks and smaller tributary streams, other major bodies of water affected include Little River, a biologically diverse stream in northeast Alabama, reported to be completely dry, with Little River Falls showing only the dry bones of its boulders. Mobile Bay is receiving a reduced influx of fresh water from the Tombigbee and Alabama river systems, threatening the oyster beds in the bay, which require a specific mix of fresh and salt water to survive. Birmingham Water Works this week declared stage four of its drought management plan, indicating an “extreme drought emergency” and imposing surcharges of 400 percent for exceeding water use allowances.

*estimated rainfall total for Blount County in 2016, IF total rainfall for months of November and December this year equals its unofficial historical average of 9.96 inches, which seems unlikely in light of current forecasts. But don’t forget Christmas night last year, when rainfall totals of 8 to 12 inches were widely reported for a single night.