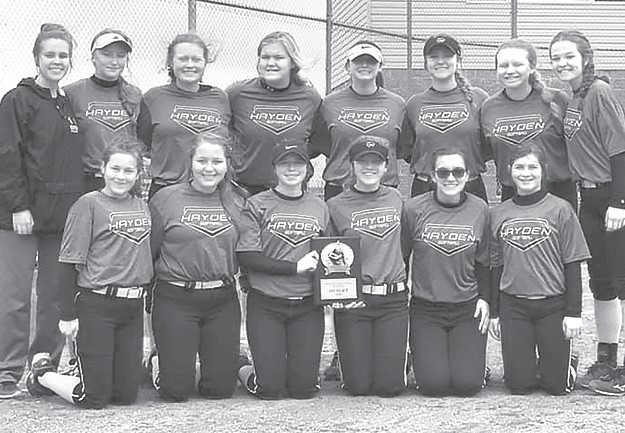 Appalachian blew Brindlee Mountain away 6-1 last Tuesday in their first game and 9-7 in their second matchup.

Brindlee Mountain scored their only run in the first inning. It was a slow start for the Eagles, but in the third inning they began their scoring session with four runs.

Chase Payne was on fire on the offensive and defensive sides. He received the win from the mound, lasting over six innings and allowing only two hits and one run. Payne was 3-4 from the plate with 2 RBIs.

During the second contest, Appalachian had a six-run lead in the first inning. The Eagles had 12 total hits in the game. Chase Payne (3-5), Dalton Lancaster (3-4), and Max Glaze (3-4) each had multiple hits.

The Eagles barely continued their streak, defeating Susan Moore last Thursday 10-9. Susan Moore took a quick 5-0 lead in the first inning. The Eagles came out of hiding in the fourth inning and scored six runs to make the score 8-6. The game was tied at eight in the bottom of the seventh. Noah Harris doubled and scored two runs to win the game. Harris was a perfect 4-4 with 4 RBIs.

The Redskins claimed a 12-2 victory over Cleveland Friday. Oneonta played consistently, scoring in each inning. They had nine hits in the game. Jake Hodge, Jacob Green, and Will Moye all had two hits to lead the Redskins. Brodie McCracken earned the win from the mound. He lasted six innings, gave up just four hits and no runs. He struck out 10 and walked one.

Cleveland showed out on Saturday in two big wins, 15-3 over Carver and 16-3 over Fultondale.

The Panthers led Carver early. They had their biggest inning in the third when they scored eight runs. Elijah Longshore and Tony Zavala led the team with two hits each. Matt Walker had an impressive three of the Panthers 10 total stolen bases. Walker was also the winning pitcher for the Panthers, allowing only two runs on two hits over three innings, striking out seven and walking zero.

Cleveland came out hot in the first inning against Fultondale scoring 14 runs. The Panthers had 11 hits for the game. Cade Wilson, Adam Hernandez, and Jonathon Chacon each had two hits to lead the Panthers.

Hayden started their week out with multiple hard losses to Jasper, but bounced back Friday to defeat West Point 11-1. Dalton Curtis led the Wildcats on the mound allowing only one run on five hits over four innings. He also struck out eight and walked one. Hayden had 10 total hits. Cam Partington (3-4, 2 RBIs), J. Olvey (3-4, 1 RBI), and Ben Abernathy (2-4, 1 RBI) all led the pack.

Southeastern had a stellar week with multiple wins, their first being against Saint Clair County 6-1. Albert Tinney was the winning pitcher allowing only one run and striking out 10. Tinney, Mitchell Young, Kevin Juhola, Brody Dobbins, and Alex Lopez each collected hits to lead the Mustangs to victory.

The Mustangs won 22-9 in their high scoring match against Fultondale last Thursday. Tinney (2-2, one home run, and 3 RBIs) led the way for Southeastern’s huge victory against the Wildcats.

Locust Fork was no contest for Southeastern over the weekend. The Mustangs beat the Hornets 8-3 Friday and 14-7 on Saturday. During the first game, Tinney once again paved the path for the Mustangs driving in multiple runs in the second inning and a home run in the sixth. Tinney finished the evening 2-4 with 4 RBIs. Mitchell Young snagged the win on the mound. He lasted six innings, allowed six hits and two runs and struck out three.

Hayden JV girls (above) won the Appalachian Invitational last weekend. The Lady Wildcats cruised to an easy 11-1 victory over Appalachian in game one. Mia Simmons took the win surrendering only one run on four hits over four innings. After falling to Douglas in game two, they faced the Ashville Bulldogs coming away with a 6-3 win behind the strong pitching of Emily Adkins and Gabby Knighten. They faced Douglas once again in the championship game where they came away with a big win, 10-1.

Hayden varsity defeated Cullman 16-2. Lindsey Smith started the night with a three-run homer and the ladies never looked back. They notched seven runs in the third with Savannah Woodard (5 RBIs), Kaitlyn Belding, Brenna Hays, and Lani Adams each driving in runs. Savanna Painter pitched a gem allowing one hit and two runs while striking out one and walking one. Hannah Cox threw two innings in relief.

The Lady Eagles began last week with a pair of wins. Appalachian won 9-8 against Fairview and 18-2 over Faith Christian. Elise Maddox was the winning pitcher in the Fairview game. Maddox pitched over four innings, allowed two hits and three runs and struck out two and walked zero. The Lady Eagles had eight total hits in the game. Ashley Whittington went 3-4 with 2 RBIs and Jordan Henderson went 2-3 with 3 RBIs.

Appalachian scored 10 runs in their first inning against Faith Christian and continued their unstoppable offense in the second inning with eight runs. Aleigha Wilson was 2-2 with 2 RBIs and Gracey Gulledge was 2-3 with 3 RBIs.

The Lady Eagles ended their week hosting the Appalachian Invitational. They were defeated by Hayden 10-1 in their first game. Hayden got a strong pitching performance from Mia Simmons, allowing just four hits and one run over four innings, as well as striking out two and walking zero. The Lady Wildcats had 11 total hits. Lindsey Smith, Marissa Painter, and Becca Benton led Hayden with multiple hits. Smith led the pack at 3-3 with 1 RBI.

Appalachian bounced back after their loss and defeated Ashville 3-0 in their second game of the Invitational. Whittington had a stellar performance on the mound and from the plate (2-2, 1 RBI). She pitched four innings, struck out six and allowed only three hits and walked one. Henderson knocked one out of the fence in the third inning.

The last game of the tournament for the Lady Eagles was a tough 2-1 loss to Douglas. The game was tied at the top of the fourth when Douglas singled on a 2-2 count to score one run and afterwards Appalachian was unable to get any productive hits.

The second game and win for Locust Fork was an 8-1 win over Oneonta. Skylar Massey, Savannah Neely, Lexi Tallie, Calvert, Tumbush, League, and Payne all had multiple hits to lead the Lady Hornets to victory.

The Lady Hornets continued to win big in their third game beating Fultondale 10-3. Payne was the winning pitcher and was 2-2 from the plate with two runs and 3 RBIs. The offense was led by Tumbush, Tallie, League, Neely, and Sarah Moore with multiple hits.

The championship game was another Hornet-Redskin faceoff. Unlike the previous meeting, this game was much more of a nail biter for Locust Fork. The Lady Hornets trailed the Redskins until League hit a three-run homer in the last inning to send the game into extra innings. Oneonta and Locust Fork scored in the extra inning to go into yet another extra inning. The Lady Redskins scored two runs; Locust Fork goes to bat and League hit another homerun and won the game.

Susan Moore began their week with a 7-0 win over Oneonta. The Lady Bulldogs took a quick 5-0 lead in the first inning. Haley Lang scored four of the runs on a grand slam. Mekenzie Standridge shut out the Lady Redskins pitching the entire game. She surrendered only three hits, struck out five, and walked one. Lang led the Lady Bulldogs at the plate 2-4 with 5 RBIs.

Although the Lady Bulldogs out-hit Locust Fork 12-to-7, they were defeated 14-7. The Lady Hornets scored nine runs in the first inning and Susan Moore was unable to recover. Neely (3-5) and Massey (2-5) had multiple hits to lead Locust Fork.

Susan Moore improved their record to 3-1 after a big 8-3 win against Saint Bernard. The Lady Bulldogs also defeated Saint Bernard 5-3 to get their first win of the season.

J.B. Pennington had two wins last week: Tarrant 2-1 and Saint Bernard 4-0. The Tigers now have three wins and one loss. They will play Fultondale Thursday. The Lady Tigers defeated Brindlee Mountain 3-1 and West Point 2-1, but lost to Saint Bernard 2-4. They will also play Fultondale Thursday. They have three wins and two losses.