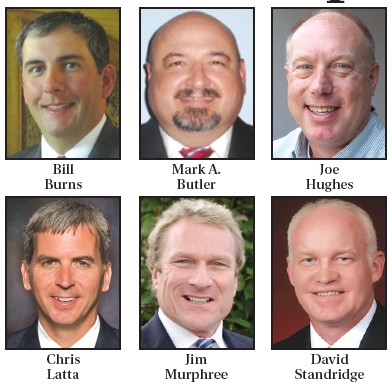 Six candidates, all Republicans, have qualified for the special election for District 34 State Representative. The election is being held Oct. 23 to fill the seat vacated by Elwyn Thomas who retired Aug. 31.

The last day to register for the primary, if you are not already registered, is Oct. 12. The runoff election, if needed in the event no candidate gets over 50 percent of the vote in the primary, will be held Dec. 11.

Bill Burns, 40, is a sole practitioner attorney based in Oneonta. He resides in Remlap with his wife and two children, aged 10 and 8. His firm, Burns Legal & Political Affairs, handles legal matters in area courts, as well as government relations and campaign management. He is president of the Blount County Bar Association, serving his second term in that office. He claims wide experience dealing with legislative matters and says public policy has been a passion for many years.

Mark Butler, 48, is employed by the Blount County Soil and Water Conservation District as the Blount County watershed coordinator. He lives in Nectar and has two children, aged 23 and 20. He has been a poultry and cattle farmer for 25 years and currently owns a farming operation in the county. His priorities are supporting funding for education and keeping Blount County alcohol-free. He has been active in local civic affairs, particularly children and youth recreation and related activities.

Joe Hughes, 50, is a sales representative for APAC-Midsouth, a road materials supplier and contracting firm. His career background includes a variety of road contracting and construction experience. He lives in Locust Fork with his wife. He has two children, aged 22 and 18. He was recently elected mayor of Locust Fork for a second term. He is a board member of Crime Stoppers – Blount County and a board member of Associated Builders and Contractors (ABC).

Chris Latta, 42, is the market executive for People’s Bank in Oneonta. He lives in the Straight Mountain community with his wife and 3 daughters, aged 15, 10, and 7. He attended Oneonta High School and Wallace State Community College, completing the Alabama Banking School program. He has worked in the banking industry for 20 years. He has served eight years as an elected member of District 5 (Appalachian/Southeastern) of the Blount County Board of Education.

Jim Murphree, 49, is the owner of Jim Murphree Insurance Agency, which he bought from his father in 1993, having worked in the family business since 1985. He lives in Oneonta. He has two children, aged 17 and 15. He has been active in civic affairs, serving as past president of both the Rotary Club and the Chamber of Commerce board of directors. He formerly represented this house district (District 34) from 1994 to 1998. He is currently active in church, school, and community activities.

David Standridge, 49, is the recentlyretired probate judge/commission chairman of Blount County, where he served since taking office in 2007. He lives in the Hayden area with his wife. He has three children, aged 29, 27, and 24. His experience includes 21 years with the Blount County Sheriff’s Department, where he achieved the rank of captain. He also was elected to the Blount County Board of Education in 2000, serving as board member for District 1 (Hayden) for six years.