District 1 gets wet kiss from Cindy 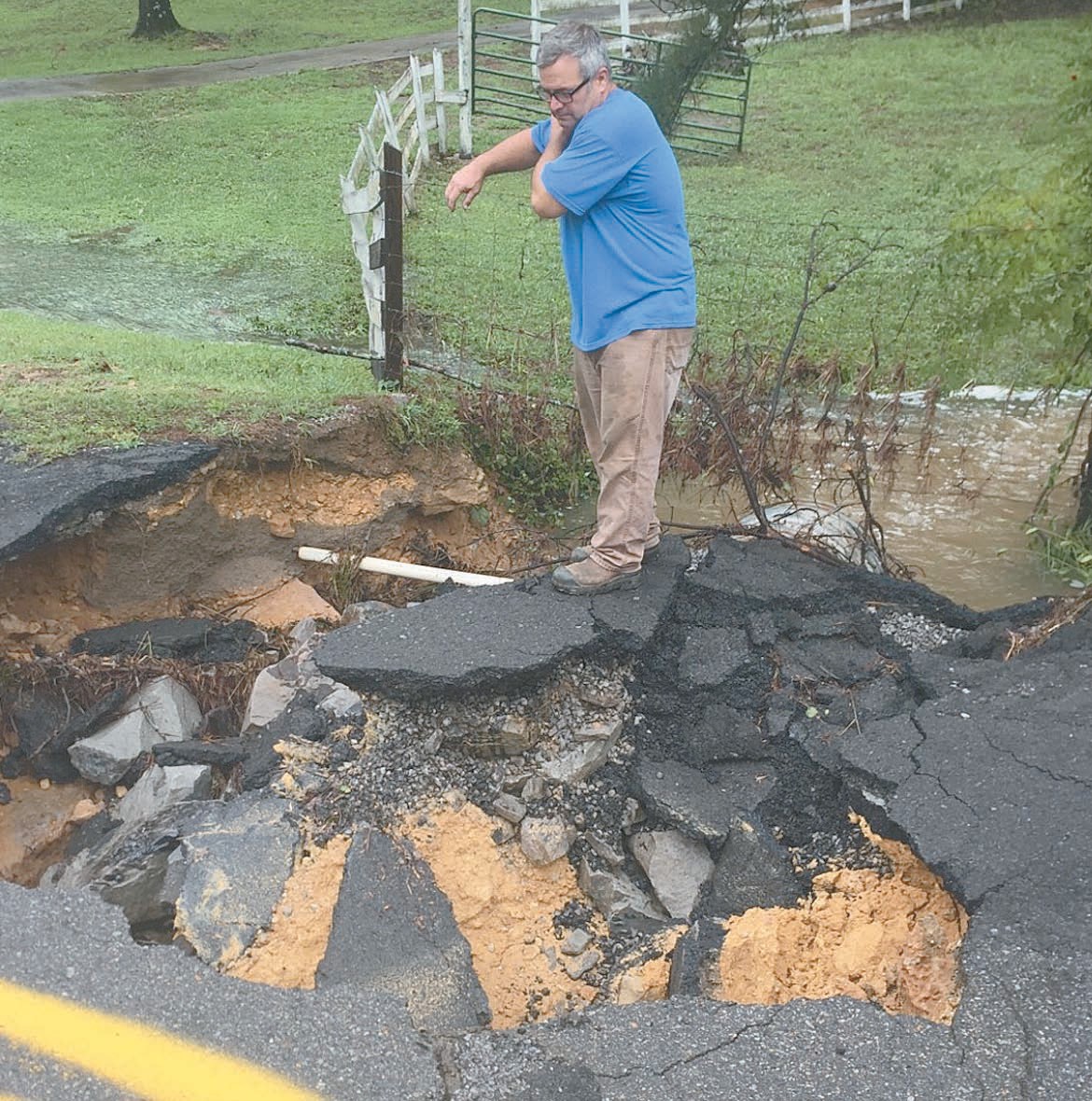 District 1 Commissioner Allen Armstrong surveys the damage on Mountain Trail, which washed out Saturday morning. Major repair included replacing the rusted pipe with a 60-foot, 60-inch diameter plastic pipe and refilling the trench with fill material with a crusher run surface, making it passable to vehicles until the trench can be repaved after it settles for a few months. The repair was completed Tuesday.

District 1, covering the western-most part of Blount County, got a belated wet memento from the remnants of Tropical Storm Cindy Saturday after the remainder of the county had concluded that the expected excitement was already over.

Beginning around 4 a.m. and lasting for several hours, it rained cats, dogs, and frogs until the middle of the morning, unofficially totaling well over 4 inches for what was expected to be – and was – the dregs of the storm for the rest of the county. The total for the entire three-day event – 4.16” at the official 911 weather gauge in Oneonta – failed to equal Cindy’s exuberant farewell to the Hayden area.

No bridges were lost – but a load of 100-pound rocks used to buttress a bridge abutment were washed away – and a number of roads sustained washouts, with one total washout of Mountain Trail and the better part of a dozen different places where shoulders were washed away, Armstrong said. The District 1 crew spent a 12-hour day working on the worst of the washouts, he added.

A preliminary view, pending Armstrong’s concurrence, is that it was a relatively sudden, transient event. Reports to 911 of trees down and roads flooded began to drop off sharply by mid-day Saturday: a classic flash flood phenomenon. At 1:24 p.m. Armstrong issued what amounted to an all-clear, noting that while a portion of Mountain Trail was still blocked, all other roads were passable. The road crew continued working until 6:30 p.m. anyway.

Elsewhere in the county, commissioners reported only minor road flooding and blockage by fallen trees.

911 recorded 65 calls over the three-day period to report trees down, lines down, roads flooded, and traffic accidents, though not all accidents reported were weather-related. Here’s a breakdown, by type of call and by district.

a.m. Saturday morning were from the District 1 area.