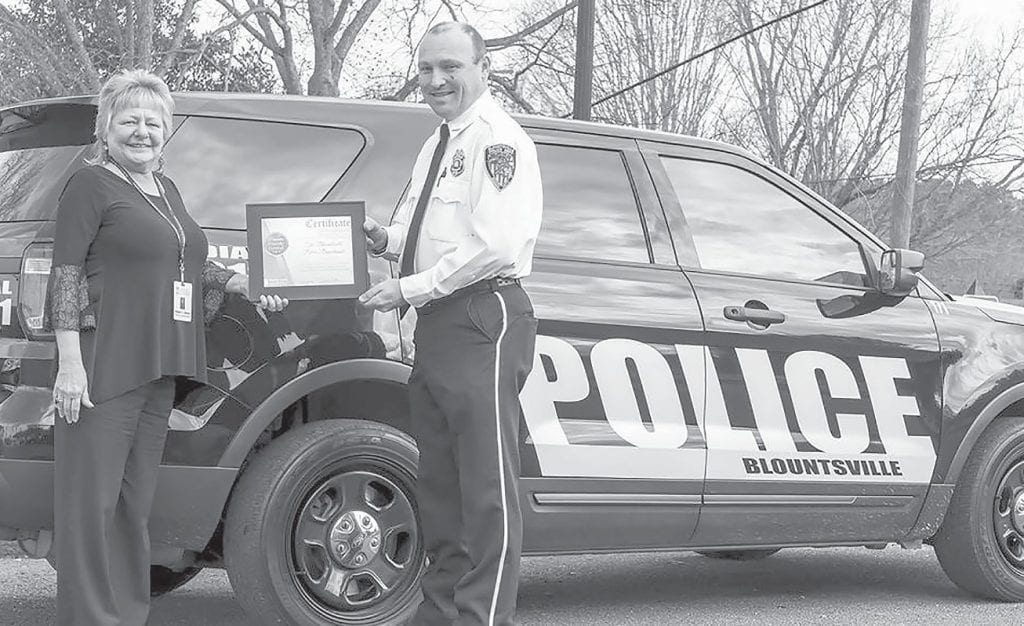 Memory loss, irrational thinking, confusion, and combativeness are just a few of the challenges first responders are often confronted with when handling emergency calls involving Alzheimer’s and dementia patients.

Because Alzheimer’s and dementia patients often initially respond with a fearful reaction, it has been determined that handling these type of calls in a traditional way may not always be the most effective for first responders.

Blountsville Police Chief Robert Grissom (pictured with trainer Robin James) understands this concept all too well, as his department has begun encountering this issue on a frequent and almost daily basis.

He decided to take a proactive approach and immediately arranged Dementia Friendly Training for his department and any other departments who were able to participate.

Grissom said Blountsville Police Department is the second department in the state to be deemed a “Dementia- Friendly Department,” and the town of Blountsville is the first municipality in Alabama to receive that certification.

Grissom said of the training, “It was unlike any other class I’ve had in the last 20 years.”

Grissom said he was encouraged as everyone in the class was fully engaged in the topic. Attendees were able to learn how to better communicate with someone who has some form of dementia or Alzheimer’s.

They were also made aware of some resources that can be utilized. Grissom said learning about the resources available and being able to help the family utilize the resources will be instrumental in meeting some of the challenges they face on an almost daily basis.

As part of the training, attendees completed some hands-on exercises that were able to shed some real light on the issues many people face as they age.

One exercise involved attendees wearing glasses that basically portrayed how an aged person perceives things such as pill color or connecting numbers. Grissom said that it was almost impossible to complete the assigned task proficiently with the distorted vision.

Grissom said it became very clear that as people age; they begin losing their dexterity and vision, which greatly affects their lives.

Grissom remarked, “Dementia is a very common problem, but there has not been a common training. If we know what we are looking at, there may be a better way to help people. It is good for everyone involved. It was a very uplifting and eye-opening class.”