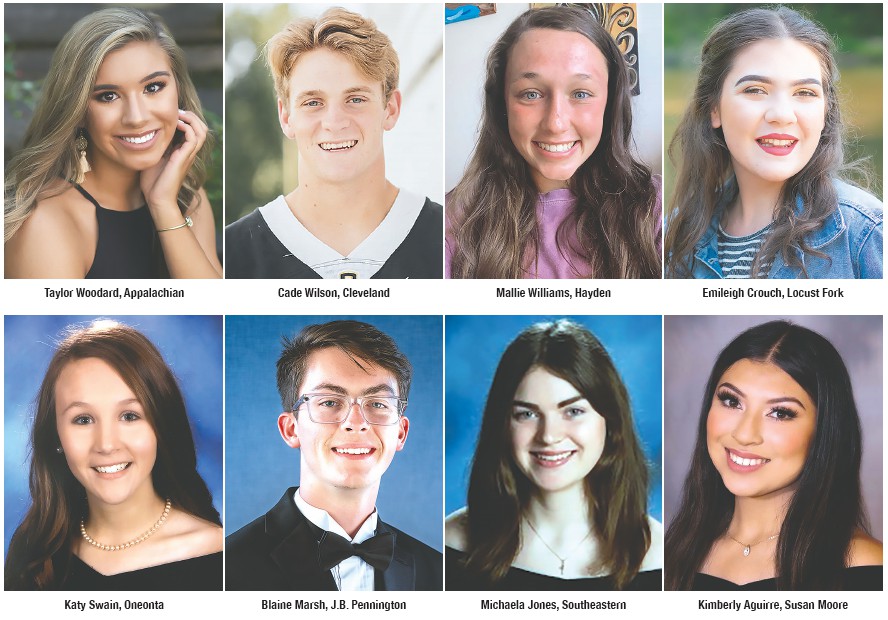 The Warrior Rivers Chapter of the Daughters of the American Revolution honored eight Blount County high school seniors as Good Citizens Jan. 12 during an online recognition ceremony. A DAR Good Citizen must exhibit qualities of dependability, service, patriotism, and leadership.

Jane Longshore, DAR Good Citizen chairperson, said, “They are great role models for all students with their positive attitude and strong character. They are always courteous, respectful, and considerate of others. Constantly a positive role model, leading by example.”

While the chapter regrets that it did not get to celebrate these students in person, Longshore expressed admiration for this year’s Good Citizens. According to Longshore, each student is special as they are selected by their fellow peers as well as their faculty.

“I wish we had the space to tell you much more about these accomplished seniors. They are involved in their schools, in their churches, and they have spent many hours doing volunteer work.

“In their essays, they expressed so much about the undying perseverance and unwavering confidence of our ancestors that continue to keep our nation strong through whatever the future may hold. Even now in the midst of a pandemic, ordinary citizens step up to help others in need. These traits from good citizens saved us in the past and will keep us moving forward no matter what challenges lie ahead,” Longshore said.

Appalachian High School’s Taylor Woodard was chosen by out-of-county judges as the overall Blount County winner. Daughter of Chris and Kelly Woodard, she has already completed two years of college credits through Wallace State Community College. She will attend the Honors College at the University of Alabama at Birmingham. After completing her master’s degree and residency in medicine, she wants to become an anesthesiologist.

Congratulations to each of the county’s DAR Good Citizens:

• Cade Wilson, Cleveland High School, is the son of Jeremy and Mandi Wilson. At this time, he plans to pursue a degree in business or chiropractic care.

• Mallie Williams, Hayden High School, is the daughter of Danny and Laurel Williams. She will attend Wallace State on a volleyball/academic scholarship. Her future plans involve either teaching primary school or becoming a pediatrician.

• Emileigh Crouch, Locust Fork High School, is the daughter of Rick and Stephanie Crouch. Emileigh has been accepted to Jacksonville State University where she plans to major in political science with the hope of one day serving as an attorney.

• Katy Swain, Oneonta High School, is the daughter of Bob and Ashley Swain. Katy plans to study at UAB or Auburn University to pursue a career in physical therapy.

• Blaine Marsh, J.B. Pennington, is the son of Craig and Christy Marsh. Though his plans are not set in stone, he does know “the Lord will provide.” He is considering a degree in mechanical engineering from UAB. Blaine does know that he is called to the ministry in different ways, though, and would love to devote time to people that are affected by addiction.

• Michaela Jones, Southeastern, is the daughter of Chere and Michael Jones. She plans to attend college out of state and major in math with a minor in computer science or statistics.

• Kimberly Aguirre, Susan Moore, is the daughter of Remigio Aguirre and Patricia Santos. Kimberly has researched her major for years and plans to study diagnostic imaging sonography with the goal of eventually opening her own clinic.

Winners were selected by their schools because they exhibit the qualities of dependability (truthfulness, loyalty, and punctuality), service (cooperation, courtesy, and consideration of others), leadership (personality, self-control, and ability to assume responsibility), and patriotism (unselfish interest in family, school, community, and nation) to an outstanding degree.

The contest is composed of two parts: the student’s personal component (how they manifest the qualities of a good citizen, their official grade transcript, and two letters of recommendation) and an essay contest (a topic is given and each student has two hours to write an essay using no reference materials).

DAR is a women’s service group whose members are descended from the patriots who won American independence during the Revolutionary War. To learn more about the work of today’s DAR, visit www.DAR.org or contact janelongshore@otelco.net.