For third time in 58 years 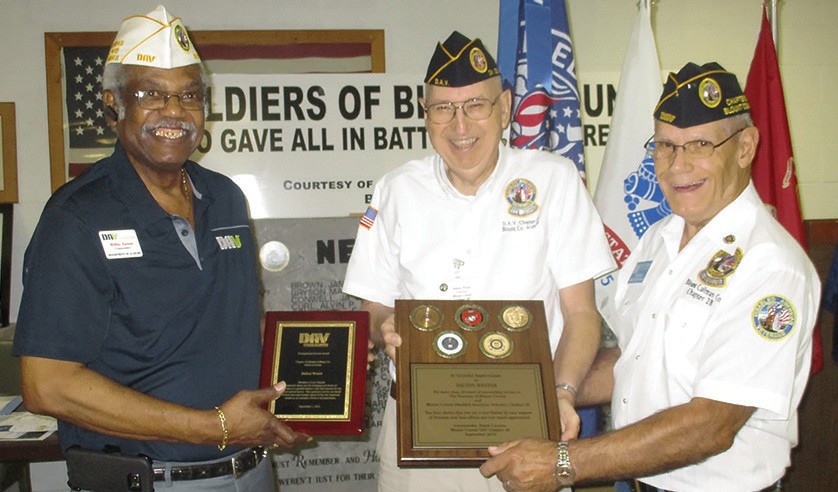 The first time Dalton Wester mustered out was in 1982 when he retired following his 20-plus years in the Navy. The second time was when he retired after 24 years as Blount County veterans service officer for the Veterans Administration, the role in which many Blount County veterans (and their families) knew him. He materially assisted many of them by helping solve thorny administrative and practical problems affecting their lives.

The third time was last Saturday when he resigned as treasurer of Blount County Disabled American Veterans (DAV) Chapter 28 after serving in that post for the last 15 years. He received two plaques on that occasion, one from the local chapter, which he is holding, and a plaque designating his Distinguished Service Award from the state DAV organization.

Editorially, that means he has served his country for 58 years – practically all his adult life – and personally served his often-beleaguered veterans for 42 years. It’s a record that perhaps sets the bar in the county for honor, duty, and devotion to service to his fellows.

“I’m going to miss him,” said Frank Cannon, commander of DAV Chapter 28. “He’s been doing our financial and expense reports forever. You didn’t have to worry, you could just know it was always going to be done right and done on time. We never had any problems with our reports to the national organization, and that’s saying a lot, because a lot of chapters did. Plus, he helped everyone in the county. Losing Dalton’s like losing your right hand.” Cannon admitted to choking up a bit when he presented the local chapter plaque to Wester and expressed the chapter’s sentiments to him – shortly before recovering himself and asking him briskly to stay on for one more month until a successor can be found.

During his Navy career, Wester worked in administration at the San Diego Group Pacific Reserve Fleet; at several naval reserve centers; at Naval Readiness Command, Region 7, Charleston, S.C.; and retired in 1982 as administrative supervisor at Naval Air Station, Atlanta. He served as veterans services officer for Blount County from 1986 to 2010. He is the longest-serving active member of DAV Chapter 28, though not the longest-serving member, nor the oldest member, of the chapter, he said.

He spoke briefly on receiving his awards. “It’s time to step down,” he said. “I’m not getting any younger, the job’s not getting any easier with all the computer requirements, and I’m not seeing as well as I used to any more. It’s time to turn it over to somebody younger. I want to tell you how much I appreciate all of you and your support all these years,” he said.