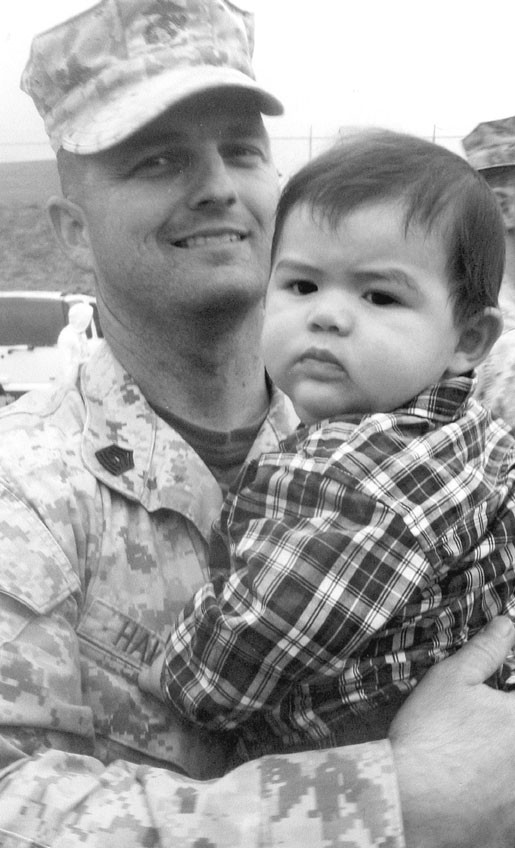 When MSGT Andy Hallman was deployed to Afghanistan Feb. 26, he was reconciled to not being present for the birth of his first child, due March 2. Hallman is an 18-year Marine with the 3rd LADD Bravo Battery from Pendleton, Calif.


As God has done many times before, He intervened in the life of this Marine: He opened a door for emergency leave to Bay City, Texas. So, Andy was present at Lathan Tyler’s birth Feb. 19. Mom Irasema’s labor had been induced 10 days early to make it happen.

When the master sergeant returned safely home Sept. 17, he found his son a whopping 23-pound 7-month-old, quite a contrast to the bundle of joy he left weighing 6 pounds 7 ounces. Ty and Dad are still getting acquainted and making up for lost time.

While in Afghanistan, Hallman reenlisted for another four years, which will give him a 22-year career if he chooses to go past 20-year retirement. He also served in Iraq at the beginning of the Iraqi conflict.

The Hallmans reside in Wildomar, Calif. Ty is the grandson of Carol and Tommy Hallman of Decatur and Hector and Carmen Hernandez of Bay City, Texas. He’s the great-grandson of Tom Hallman and the late Sibyl Hallman of Pine Mountain, Remlap, and Alice Jones of Decatur.