County representatives wind up session on a productive note 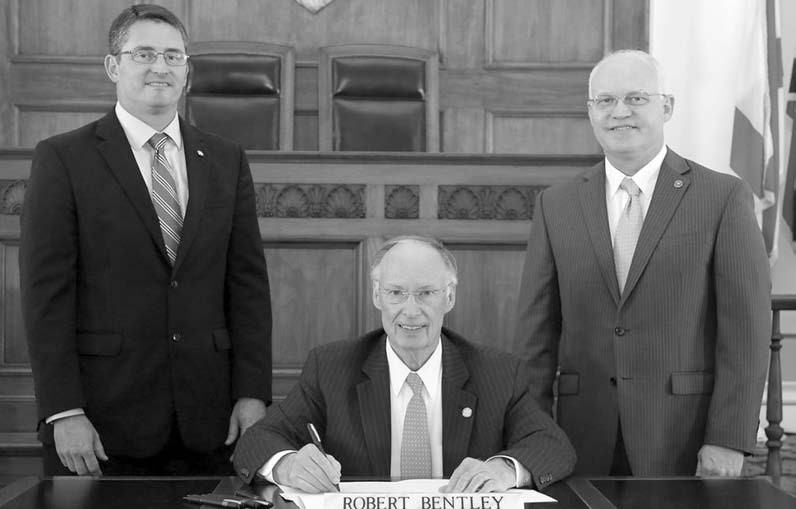 Sen. Shay Shelnutt and Rep. David Standridge, both representing Blount County majorities, take a figurative bow as Gov. Bentley signs House Bill 41. The bill allows a voter who is physically disabled or over the age of 70 to move to the head of the line at a polling place if he so requests. Standridge sponsored the bill in the House, where it originated, and Shelnutt helped shepherd it through the Senate.

Blount County Reps. David Standridge and Randall Shedd, and Sen. Shay Shelnutt probably had as difficult a time as most other legislators in the session just concluded, but they ended up with positive results for their constituents back home.

All three drew assignments in connection with efforts to study and pass various initiatives related to the doomed general fund budget, passed by the Legislature, but vetoed by Gov. Bentley as insufficient to deal with the impending budget crisis. In that respect, they were frustrated as were most of their colleagues.

However, some progress was made, according to District 34 Rep. Standridge, who said he actually had a sort of banner year at getting his legislation through the bottleneck. He said he was able, with help from colleagues, to pass four bills that he sponsored.

One was his church vandalism bill, criminalizing theft or vandalism of church property and providing for restitution by offenders. A second was the bill allowing the elderly and disabled to move to the front of the voting line at a polling place. Third was a bill to help assisted living home administrators discipline residents for lewd behavior. And fourth was a “housekeeping” bill providing for the board members of the Alabama Manufactured Housing Association to meet twice a year instead of four times, thus saving substantial money.

That doesn’t include his efforts to support successful passage of the Birmingham Water Works Bill, which added Blount County representation on the board and reduced its members’ compensation and prerogatives. Standridge said that was the single most contentious bill in this year’s session.

Meanwhile, District 11 Rep. Randall Shedd’s bill to provide customized motorcycle license tags for disabled veterans turned into a virtual omnibus that he and Sen. Gerald Dial of Lineville managed to maneuver through both state Houses, after addons from seven other colleagues.

They refer to the final bill as the “meta tag bill” because it adds a host of new tags that can be purchased including the state bicentennial tag and numerous personalized tags. The new legislation provides for several new military tags for those who qualify, for multiple firefighter tags, and new personalized “In Memory” license plates honoring deceased family members.

Tags provided for in the legislation will be available beginning in January 2016.

Shedd also announced last week that he has been appointed to serve on the Legislature’s Joint Committee on Public Pensions, a panel tasked to insure the fiscal health of Retirement Systems of Alabama and the monthly benefits it provides.

District 17 Sen. Shay Shelnutt introduced a bill that would increase state employee productivity and save the state some $13.6 million a year by reducing the number of annual state holidays from 15 to 13, roughly the average number of annual holidays for states in the southeast. The bill was reported out of committee in the Senate but was a no-go in the House, Shelnutt said.