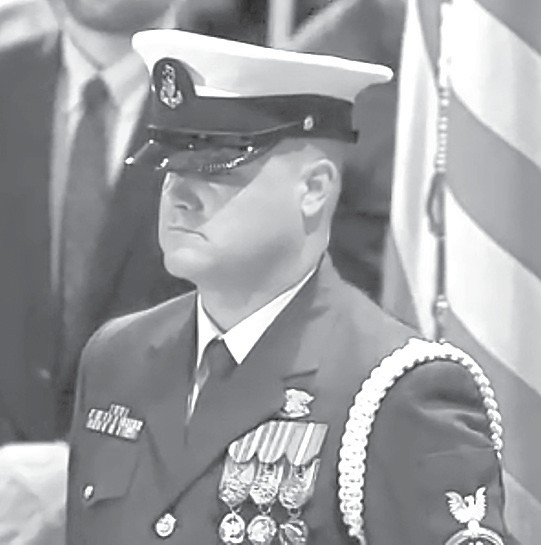 Oneonta native Lee Underwood stood in honor before President George Herbert Walker Bush’s casket as his body lay in state in the nation’s capitol earlier this month. Underwood’s duties spanned some five 30-minute segments for each of the two days.

Underwood, in his 15th year in the Guard, began the position in the branch’s honor guard in July. Since then, he has seen regular service at the gravesites of American servicemen in Arlington National Cemetery. His responsibilities have included wreath-laying privileges at the Tomb of the Unknowns, most recently on Veterans Day.

The 1998 graduate of Oneonta High School joined the Coast Guard following time working in his family construction business and periodic attendance at Wallace State Community College. He says he saw the service as an opportunity to travel, have new experiences, and help provide an education.

The initial attraction has transformed into a career. The E-7 chief petty officer anticipates retiring from the service, but expresses uncertainty at which point in his limited 30-year option he may leave.

Underwood says the service has met his expectations through assignments along the East Coast and especially in the New York and D.C. areas. He and his younger brother Justin went through basic together. Both presently serve in the MDW (Military District of Washington) and have “storekeeper” specialties.

Officials accepted Underwood’s Honor Guard application, whose qualifications include a set height range and other physical characteristics. He explains that the four-year duty requires regular training with manuals, swords, and a surprising mental and physical toughness to maintain extended periods of rigid attention.

Married in February to the former Brenda Alvarez, Underwood speaks lovingly of his stepdaughter Eva Davis, 10, son Joaquin, 10, and daughter Ida Mae, 8. Lee’s father Danny Lee, for whom he is named, died in 2017. His mother Darlene and sister Marilyn Hawkins live in Blountsville.