County Line votes to move ahead with landfill plan 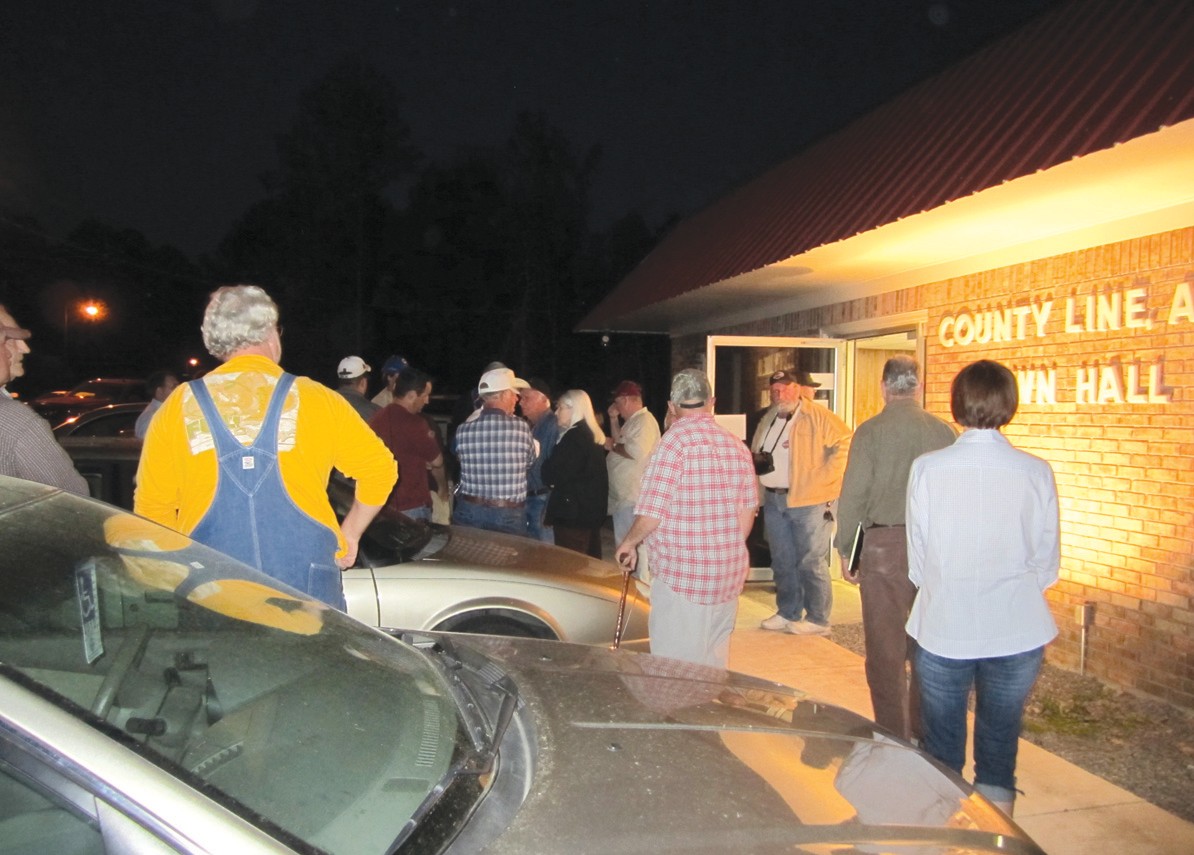 More than 100 citizens gathered at County Line town hall last Tuesday night to express their opposition to the town’s endorsement of its Solid Waste Management Plan. Only 40 were allowed inside by Jefferson County deputies and once there, were not allowed to speak concerning the landfill.

At a meeting at the town hall, the town council of County Line unanimously adopted the town’s Solid Waste Management Plan (SWMP) and instructed that it be sent to the Alabama Department of Environmental Management (ADEM) for approval.

Jefferson County sheriff’s deputies enforced an order of the state fire marshal limiting attendance inside the building to 40 persons.

About twice that many remained outside during the meeting. Several reported being threatened with arrest for “inciting a riot” for speaking their opinions outside the town hall. The assembled crowd showed no signs of rowdiness. ‘No right to speak’

County Line Mayor James Larry Calvert read from League of Municipalities materials notifying those inside the hall at the outset that they had “no right to speak” during the council business session. He also said that the April 19 date originally set for a public hearing had been cancelled, no reason given. He said a later date would be set and the public notified.

Previous notification has been made through legal notice published in The Blount Banner and a notice posted on the door of the town hall.

The council then heard read meeting minutes going back to Feb. 8 and unanimously accept- ed the town’s solid waste management plan. Calvert then said he would entertain comments from citizens, but said the council wouldn’t entertain comments or questions on the landfill.

Calvert did say the solid waste management plan had not been changed since the March 10 public hearing. ADEM responds to County Line, commission

The plan had originally been submitted to ADEM on Nov.12 and returned Dec. 1 with instructions to address a number of deficiencies including:

“the impact of a proposed facility on public safety and provisions made to minimize the impact on public health and safety,” and

“the social and economic impacts on the affected community, including changes in property values, and social or community perception.”

The letter noted seven other technical problems or deficiencies.

In response to the Blount County Commission’s March 16 letter expressing its opposition to the landfill, ADEM suggested in its reply that the commission express its reservations to the town of County Line concerning the landfill.

“The issue of need for additional landfill capacity raised in your correspondence to the Department is an issue that is to be evaluated during the local approval process by the local host government… I encourage you to raise your concerns to the Town of County Line as part of its public participation process,” wrote Phillip Davis, chief of ADEM’s Solid Waste Branch, Land Division in his letter to Commission Chairman David Standridge. Next steps in the process

According to those familiar with the process, ADEM has roughly 30 days to reply to County Line’s transmittal of the plan. Then, if no new deficiencies are noted requiring further changes, the town or its agent may submit a permit application for the landfill to ADEM. If ADEM requires further material changes, another public hearing could be required.

A 30-day period for public comment by ADEM immediately follows the permit application. A hearing may be held by ADEM, but only if one is requested by the public. ADEM will not automatically schedule a hearing unless requested to do so in writing during the public comment period.

In the past, notice of the receipt of a permit application has been published as a legal notice in The Blount Countian. Landfill opponents have stated that they intend to call ADEM periodically to inquire whether the permit application has been filed in order to avoid any possibility of missing the public comment period due to lack of public notice.