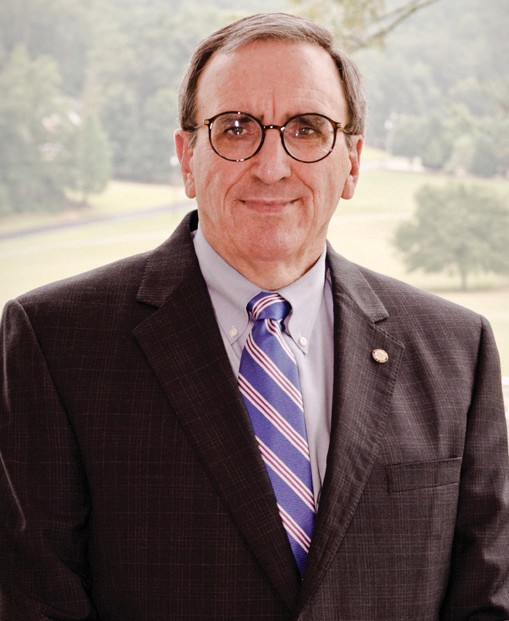 Charles Carr, executive director of the Blount County – Oneonta Chamber of Commerce died last Thursday of a heart attack, following a brief illness in recent weeks. His death deprives the county of one of the most respected and effective leaders of his generation.


Carr, 63, had served as chamber director since May 2002, when he succeeded the retiring Pat Ballew. His funeral, held Sunday at First Baptist Church Oneonta, drew mourners from over the state. He was buried at Oak Hill Cemetery.

He and wife Brenda Maynor Carr resided at Union Grove near Arab, centrally located betwen his office in Oneonta and hers in Huntsville. Their son Jonathan lives and practices law in Washington, D.C. Carr is also survived by brothers Jim Carr of Oneonta and Kenneth Carr of Houston, Texas. Carr was the eldest son of former six-term Blount County Sheriff J. C. Carr and Maxine Morton Carr.

Carr played a leading role in the economic development of the county, working tirelessly as a part of the team that recruited American Apparel, a clothing manufacturer, to the former Vanity Fair jeans plant that closed its Oneonta operations in 2001. American Apparel, which opened on Dec. 2, 2005, now has more than 200 employees and is the fifthlargest employer in the county.

Getting the American Apparel plant was a major step toward recovery from the economic blow the county suffered when its largest employer suspended operations five years earlier.

“If Charles had not called our CEO and told him about this plant and asked him to do a labor survey, we wouldn’t be here today,” said American Apparel Oneonta operations manager Tom Reeves.

Carr also supported the location and/or expansion of several other businesses in the county including Mc- Millian Fabrication, Hornsby Steel, Hydra Service, and Mid-America Engine, among others. Many smaller businesses in Locust Fork, Blountsville, Snead, and west Blount, as well as Oneonta, benefitted from Carr’s advice and assistance.

Carr was one of the four original leaders who conceived and worked to create the Blount County Family Service Center from the former Blount Memorial Hospital.

Carr helped to secure the key federal grant that galvanized cooperation among several agencies to see the project through to its conclusion. The Family Service Center serves as a model for other counties who hope to similarly consolidate service agencies under a single roof to improve convenience for citizens. Testimonial

“It’s hard to explain how valuable Charles Carr was over the whole period of time I knew him,” said Hope House director Bud Jones, himself one of the architects of the Family Service Center. “I didn’t know anything about politics or how to go about getting things done. Anytime I ran into a blank wall, I’d call him and tell him the problem, and he’d say ‘Aw, we can handle that. Let me make a call or two’ and something would break loose and we’d go on. He got that first grant to renovate the old hospital and that’s what got the project moving.

“He took me to Montgomery to introduce me to people in the various state departments down there to get help. We’d be on the way to a meeting, and there’d be people running out of every side door it seemed like hugging Charles, ‘Oh, Mr. Carr, it’s so good to see you,’ they’d say. I finally told him ‘Charles, I’m going to have to put a sack over your head or we’ll never get to where we’re going.’ Everybody remembered him from his time with the governor’s staff several years earlier.

“He loved this county and he appreciated all it had meant to his daddy and his family. He had a hand in bringing more success to Blount County than any other individual I know of. Didn’t do it all by himself, but he had a hand in it and lots of things couldn’t have been done without him. He was a team player, one of the best I know of, and he didn’t want the credit.

“The first time I went to see him, I told him my dream about getting the churches to work together to help poor and elderly people in a lot of different ways. He asked me if I needed help, and I said, ‘Well, sure, I can’t do it all by myself.’ He told me ‘Count me in.’ He meant it, and from that day on, he stood behind it.” Civic education

Carr was known throughout the state for the outstanding series of town-meeting-type civic gatherings he staged, free and open to the public. They were held monthly, sponsored and paid for by progressive local businesses and other agencies, and referred to historically as “Chamber Coffees,” though an elaborate breakfast was served at each meeting by Twin Oaks at Heritage Green. Key leaders, political and otherwise, from throughout the state were featured, including members of the state’s Congressional delegation. The series was made possible by the exceptional breadth of Carr’s contacts.

The consistently well-attended series was a source of considerable pride to Carr. On several occasions when Congressional leaders barnstormed the state, Carr would gleefully note the contrast between the reception accorded them in other larger cities, compared to Oneonta.

“They only had about 30 or 40 turn out at the Town Hall meeting in (another city) and they charged them $10 apiece to attend. We had nearly 200 here, served’em a full breakfast, and it didn’t cost’em a penny,” he observed to a Chamber breakfast audience this year.

Carr recently told The Blount Countian
that he was proudest of the success he had at securing financial aid for deserving students around the county to attend college. As a former high school teacher as well as a former employee of the state Department of Postsecondary Education, through his contacts he helped a number of students secure financial aid, particularly at Snead State and Wallace State community colleges, where he had served on both boards.

“More than anything else, this is what has made this job worthwhile to me,” he told The Blount Countian
after securing a financial aid confirmation late last summer. “It’s put me in a position to be able to help some of these kids go to college and get a good education, where they might not have been able to make it otherwise. This is where I get my real satisfaction.”

Carr graduated from Oneonta High School in 1965 and attended Snead Junior College, working as a house painter during the summers. He earned bachelor and master degrees from Auburn University. He taught psychology, sociology, economics, and history at Blount County high schools from 1970 to 1983 and also taught as an adjunct instructor at Snead State and Wallace State.

He served on the staff and cabinet for Govs. George Wallace and Guy Hunt during the period 1983-88. He retired as director of governmental relations at the state Department of Postsecondary Education in 1993 and worked as a political/education consultant for five years before joining the staff of Community Bank in Blountsville in 1998. He left that job in 2002 to assume the chamber of commerce post.

The Carr family had a distinguished record as newswriters for The Blount Countian.
Wife Brenda worked at the newspaper as a feature writer from 1968 to 1978. Many of her bylined articles are collected in a binder in the newspaper’s reference files.

Carr himself was a columnist for The Blount Countian

from July 2002 to his last column in the Nov. 24 edition this year. His signature signoff line, honed over the course of more than 200 columns of chamber and economic news, stands as his epitaph and legacy to his native county: “By working together, we are making a very good community even better.” Amen. “We are all mourning the loss of Charles Carr. Charles was a very unique individual and we know it will be difficult to replace him. The executive board will be meeting in the near future to discuss the operations of the chamber. We will include all facets of support…to make the best decision in how to move forward. Although this is a difficult and challenging time for the chamber, we know that Charles would want this community and this chamber to move forward and continue make a great community even better.”