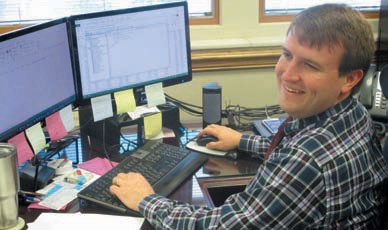 County administrator Zac Marsh (pictured below) readily admits there are two different levels of meaning for the general answer that county revenues for 2016 are “lookin’ pretty good.”

The first level relates to his ability (or good luck) as a forecaster. If revenue collections continue on the present track through September, he will have forecast them a year ago to within 0.4 percent accuracy. That definitely qualifies as “lookin’ pretty good” for revenue forecasting.

This discussion relates, by the way, to revenues directed to the county general fund, the account that bears the cost of general government in the county. General fund revenues make up more than half of total county revenues. It does not include gas-tax revenues specifically designated to roads and bridges – the other major revenue stream – or to a few other specific functions such as Student Resource Officers for the schools, which are funded by a tobacco tax that cannot be used for any other purpose.

Marsh pointed out that the sales tax increase that Blount County voters will approve or disapprove on the Nov. 8 ballot does not apply to the general fund. The entire amount of the increase that comes to the county (approximately $1.5 million, or half the total) is earmarked specifically for road and bridges, which have been chronically and significantly under-funded for years. (The remaining $1.5 million of the estimated $3 million in proceeds from the 1-cent sales tax increase is divided between county municipalities, county school systems, and county volunteer fire departments, according to a set formula. )

The county portion by law may be spent only for road-building/paving materials or for contracted road paving. None may be spent for salaries, equipment, or other overhead.

The county portion will be applied to the paving of “collector” roads with substantial traffic counts, leaving the remainder of district road budgets to be devoted to local, mainly rural, residential roads.