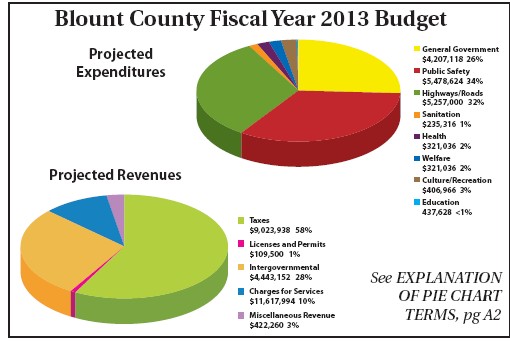 The Blount County Commission last Thursday passed the 2013 projected expense and revenue budgets for the county. Expenditures were projected to total $16,275,888 on anticipated revenues of $15,617,244. Expenditures are about 1.4 percent less than actual expenditures in the fiscal year just concluded. Estimated revenues for 2013 are up roughly 0.1 percent from last year’s actual revenues.

The approved budget entails (1) small cuts in a considerable number of budget accounts, including requests from outside agencies, (2) an identical amount to last year’s budget in a substantial number of categories, and (3) small increases in a very few categories, such as the sheriff’s department, the elections account, and the allocation for juvenile probation.

A budget shortfall of $279,270 remained after all cuts were made. That amount was appropriated from general fund reserves to balance the budget. Probate Judge/Commission Chairman Chris Green said that approach was taken to avoid making drastic cuts to individual accounts while giving the economy more time to recover, thus increasing tax revenues in the coming years.

District road budgets reached a record high this year with one district, District 1, exceeding a million dollars annually for the first time. The other three districts also saw record amounts of $940,076 apiece. The district road budget projected total of $3,838,851 for 2013 increased about 3.2 percent, or more than $100,000, above last year’s budget.