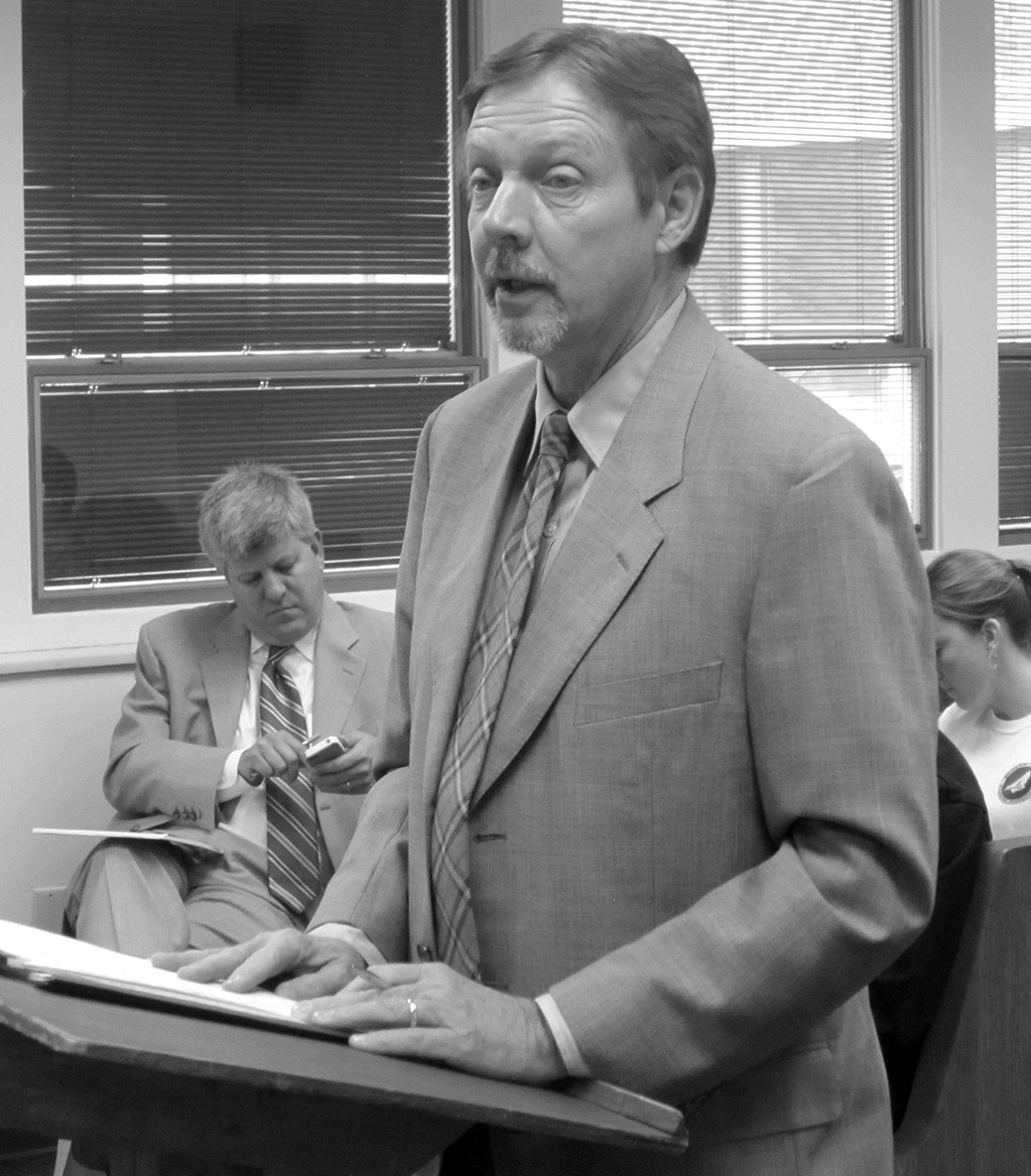 Ron Howard of Coast to Coast RX Discount presents a proposal for a new drug discount card at the Blount County Commission work session Thursday. The card would cover roughly 50 percent of prescription drug costs for citizens who have no other insurance, Howard said. The current discount drug card covers approximately half that amount, or 25 percent, of prescription costs for users. The new card could be introduced later to replace the current card provided under the auspices of the National Association of Counties (NACo). The new card would also provide some revenue to the county. The commission will consider replacement at a later meeting, subject to a favorable review of the contract by county attorneys. If the card is approved, it would be available for pickup in pharmacies and public buildings around the county. No formal application is required.

The Blount County Commission Monday requested the county legislative delegation to pass local legislation to allow the county to impose an issuance fee of $5 on driver’s license renewals for citizens who do not reside or operate a business in Blount County.

The reason for the fee is the added inconvenience to Blount Countians resulting from the increasing number of citizens from Jefferson County who avoid long waiting lines there by coming here to renew their driver’s licenses. The fee would be collected both at the Oneonta courthouse and at the Hayden satellite location.

Proceeds from the fees would go to the county general fund, with $4 going to offset license issuance expenses and $1 to assist volunteer fire and rescue departments of Blount County.

In matters directly affecting citizens, the commission voted to exclude animals and pets from being brought into the courthouse or any other county building, other than the county animal adoption center. The resolution does not apply to service animals assisting individuals with disabilities.

The commission voted to approve Allied Waste Services’ request for a rate adjustment for providing residential garbage pickup in Districts 2, 3, and 4. (Another contractor, Blount Waste Services, services District 1.) The rate will increase from $16.63 per month to $17.01 per month. The increase is effective June 1. This is the company’s first increase since 2009.

In addition to granting the rate increase, the new agreement with Allied Waste provides for two new recycling bins to be placed in the county at no cost, and for an additional four dump services per month at no cost, bringing the total to 12 free dumps per month. One of the new recycling bin locations is at Appalachian High School. The other will be at a location still to be determined in District 2.

The commission also passed a pair of policy items in order to comply with a memorandum from the Association of County Commissions of Alabama (AC CA). Approved were a policy requiring county employees to wear seat belts at all times when operating county vehicles, including construction equipment, in compliance with state law; and a policy requiring county employees to refrain from using cell phones or other wireless communication devices, while driving or operating county vehicles, including construction equipment. Employees are required to bring the vehicle to a full stop before talking on communications devices.

In addition, the county is required to form a safety committee to assure that safety considerations are observed in all areas of county operations. Arrangements will be made immediately to form that committee.

Compliance with all three of those items will result in a 10-percent reduction in the county’s general liability insurance rates through the ACCA, for a savings of about $14,500 annually.

The commission also approved and authorized the administrator to sign a scrap tire remediation contract, offered through the Alabama Department of Environmental Management (ADEM), and providing up to $100,000 annually for cleaning up illegal tire dumps within the county. The “catch” is that the ADEM program may not be funded by the Legislature this year. If it is funded, however, the county will be able to participate.

The commission approved the updated organization chart (above) which details the structure of county government. While the chart is virtually the same as the one printed in The Blount Countian more than a year ago, it is reprinted here again as a convenience.

•County road and landfill crews report directly to the individual commissioners responsible for each district, not to the full commission as might be inferred from the chart.

•The sheriff and the probate judge do not report to the commission for purposes of supervision; the dotted line shown on the chart denotes budget accountability only, as noted.

•approved the transfer of a Ford Ranger pickup truck from the maintenance department to the animal adoption center.

•approved changing the starting classification for general road workers from grade 2 to grade 4.

•approved removing three assets from District 3’s inventory, designating them surplus, and authorizing the administrator to sell: a trash pump, a trash pump on wheels, and a computer with monitor.

•approved donating to Hayden a fuel tank located at the Hayden Town Hall Fuelman site; the tank had been donated to the town by a previous commissioner; the action was taken to remove the tank from District 1’s inventory.

•failed to approve a motion allowing county employees with 10 years service or more to remain on county insurance at retirement by paying 50 percent of the active premium rate until they are Medicare eligible, then paying the entire premium when Medicare eligible. The motion, offered by District 2 Commissioner Andy Neill, failed from lack of a second; while the county could realize substantial savings on its annual benefits liability if at least 10 percent of county employees (a total of nine employees) elected to remain on county insurance and pay the 50 percent premium, the county could face unknown and possibly crippling financial liability if the program were to change in future years, according to District 4 Commissioner Waymon Pitts. “I wouldn’t want us to create a problem for this commission in years down the road,” Pitts said.

•$856.80 to District 3 from Highland Lake for pipe installation.

•$6,117.34 to sheriff’s department for money received from Cullman for work during the April 2011 storm.

•$1,894.51 to sheriff’s department for money received from Hanceville for work during the April 2011 storm.

At the recommendation of assistant engineer Glenn Peek, the commission:

•voted to accept the survey in connection with the closing of Cannons Crossing and proceed with closing the surveyed portion of the road.

•approved establishing a speed limit of 40 mph on old highway 75 in the Armstead area of District 3.

The Blount County Solid Waste Authority will hold a public hearing Thursday, April 12, at 7 p.m. in the commission boardroom at the county courthouse. The meeting will be to consider the proposal of B&B Tire Landfill (located off county road 9 in District 1) to add Georgia, Tennessee, Kentucky, and Mississippi to their coverage area.

The Blount County Commission will hold a public meeting Tuesday, May 8, at 10 a.m. for public comment in connection with the grant application process and operation of the Blount County Transportation program.

Work on decking and roofing of Easley Covered bridge is expected to be complete by the end of this month. It will not be reopened for traffic until final inspection is made on all three covered bridges when repairs are complete.

The deadline for repairs on all bridges to be complete is late August this year. Repair work is proceeding according to schedule.