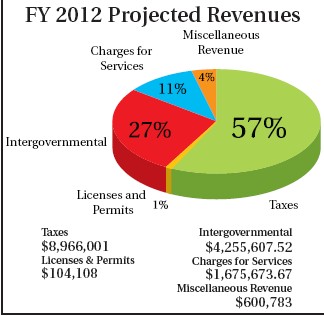 The Blount County Commission last week passed a 2012 expenditure budget that – at 8.6 percent below last year – is a mirror image of the state and national economy. At $16,496,317 it is 4.5 percent less than the 2010 budget, and 3 percent less than the 2009 budget. It is roughly equivalent to the 2008 fiscal year budget, the year the economy began its plunge into what has been popularly called “The Great Recession.”

In this edition, The Blount Countian presents its annual breakdowns of the budget as passed by the commission. It is intended to provide a comprehensive overview of the budget for the coming year, along with a comparative glimpse at the past.

It is not, however, definitive. Analysis is limitby ed to providing the monetary numbers and acknowledging larger trends that are obvious to nonprofessionals. Perusing them thoughtfully will give the reader a sense of the scope of operations of county government and a rough gauge of priorities. 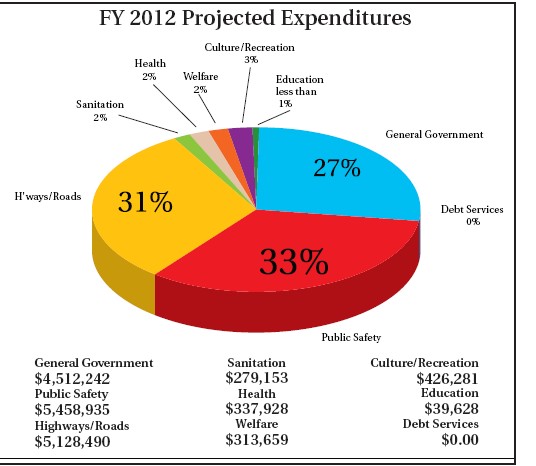 The complete budget is contained in a 400-odd-page looseleaf binder available for public scrutiny in the county commission office. The Blount Countian encourages citizens to review the budget themselves

/ for a more complete analysis and to ask whatever questions are necessary to reach their own conclusions.

Notes on the budget were contributed by county administrator Ralph Mitchell and supplemented by The Blount Countian. Probate Judge David Standridge contributed an article in which he assays to explain one of the more difficult questions he is frequently asked by citizens: Why can’t funds allocated for one purpose be easily moved to meet another need whenever such a need – such as road repair – seems pressing? See his explanation on pg. A13.

****$36,300, but included by the newspaper in departmental expense last year.

*varies by one or two employees per month. ** 4 commissioners, probate judge, revenue commissioner, and sheriff