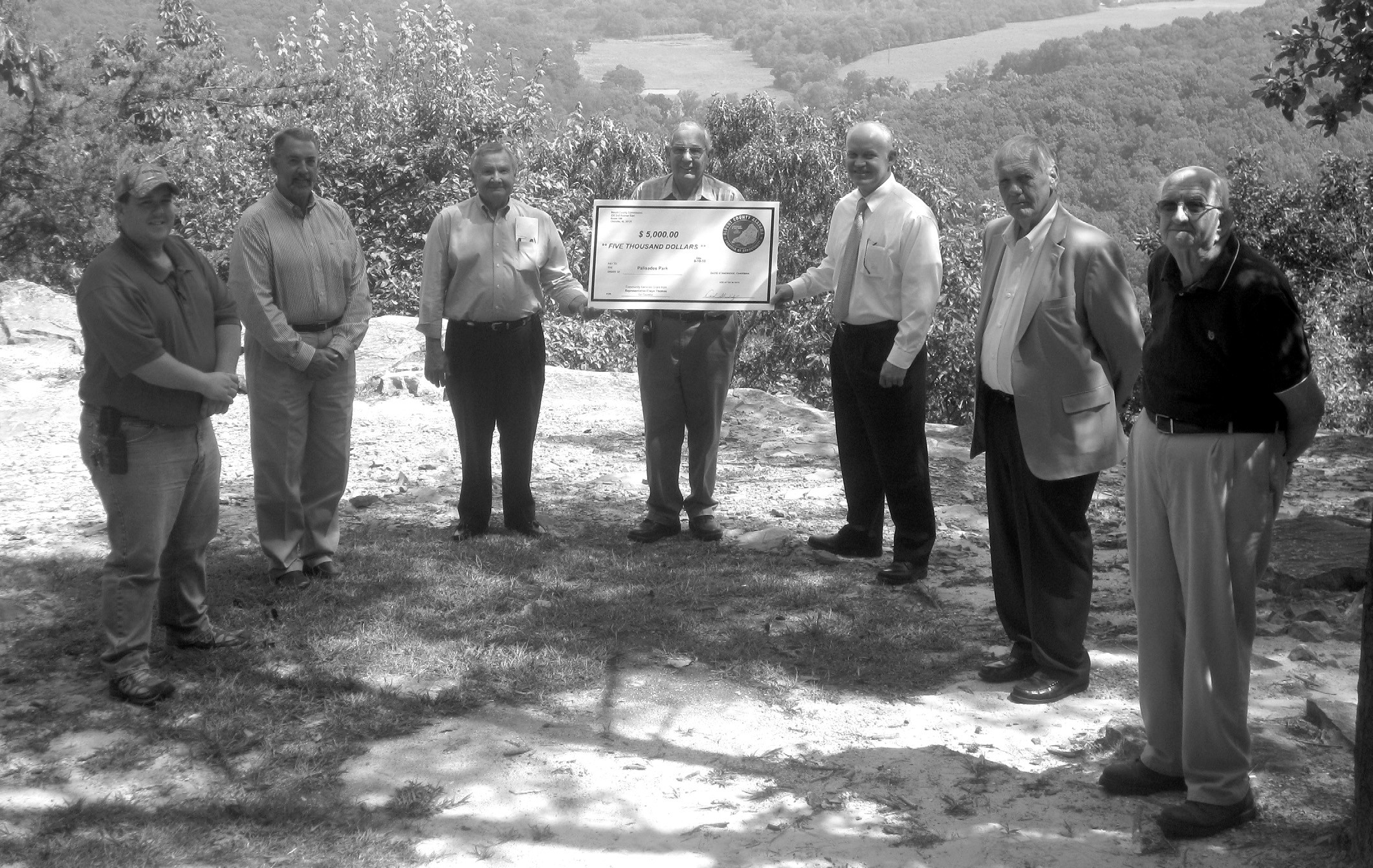 Palisades Park receives $5000 for what will be the most picturesque of the projects favored – a wedding chapel in the form of a gazebo to be built on this breathtaking overlook, located on the bluff halfway between two park lodges. The gazebo will sit in the area partially outlined by the semi-circle where the men are standing. Pictured are park manager Jeff Todd (from left), park board member Ramey Peters, state Rep. Thomas, park board chairman Bob Turley, Probate Judge Standridge, Sheriff Arrington, and park board member Eldridge Bynum.

Agencies and municipalities around the county had cause to celebrate last week as grant checks arrived for eight different entities. Five were presented in one whirlwind tour last Friday. 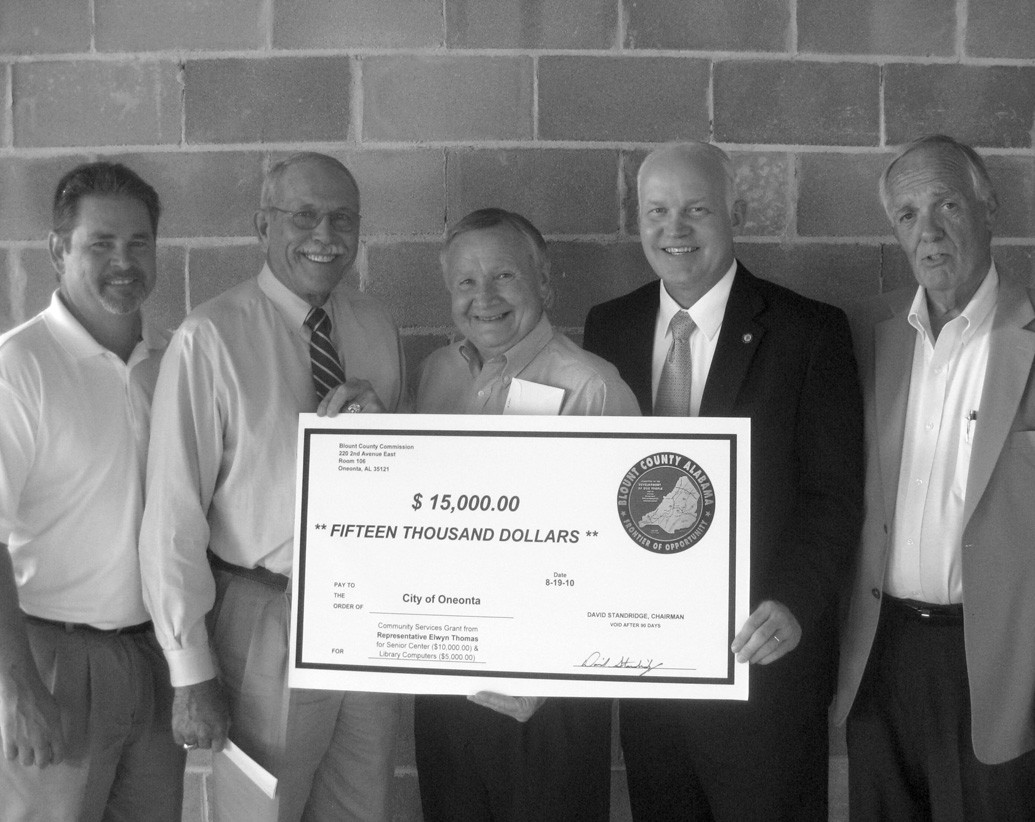 Oneonta senior center gets $10,000 for interior furniture and furnishings. Oneonta city manager Ed Lowe (from left), Mayor Darryl Ray, state Rep. Elwyn Thomas, Probate Judge David Standridge, and Sheriff Loyd Arrington all pose in front of the concrete wall of the “safe room” in the new senior center under construction in downtown Oneonta. The room is reinforced so as to be safe for seniors in times of dangerous weather. The $15,000 check covers funds for both the senior center and public library.

The checks, ranging from $2000 to $10,000, were state grants obtained and funneled through the Blount County Commission by state Rep. Elwyn Thomas with the assistance of Commission Chairman David Standridge. They covered a diverse range of needs and projects, some of them shown in photos here. 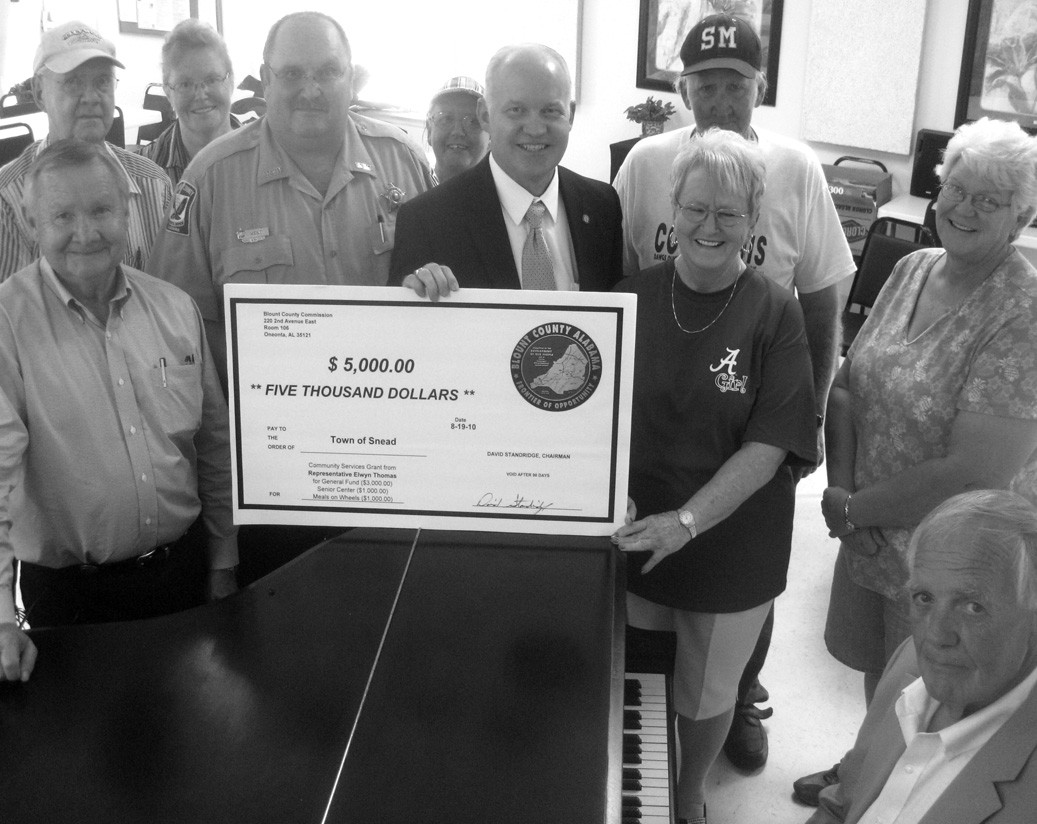 Snead Senior Center received $2000 out of a $5000 grant to be divided with the town of Snead; $1000 is designated for a sign for the new senior center and $1000 to support Meals on Wheels. Foreground (from left) state Rep. Thomas, Snead Mayor and police chief Tim Kent, Probate Judge Standridge, senior center manager Jane Childers, and Sheriff Arrington (seated at the piano). In background are senior center patrons who wanted to join the celebration. 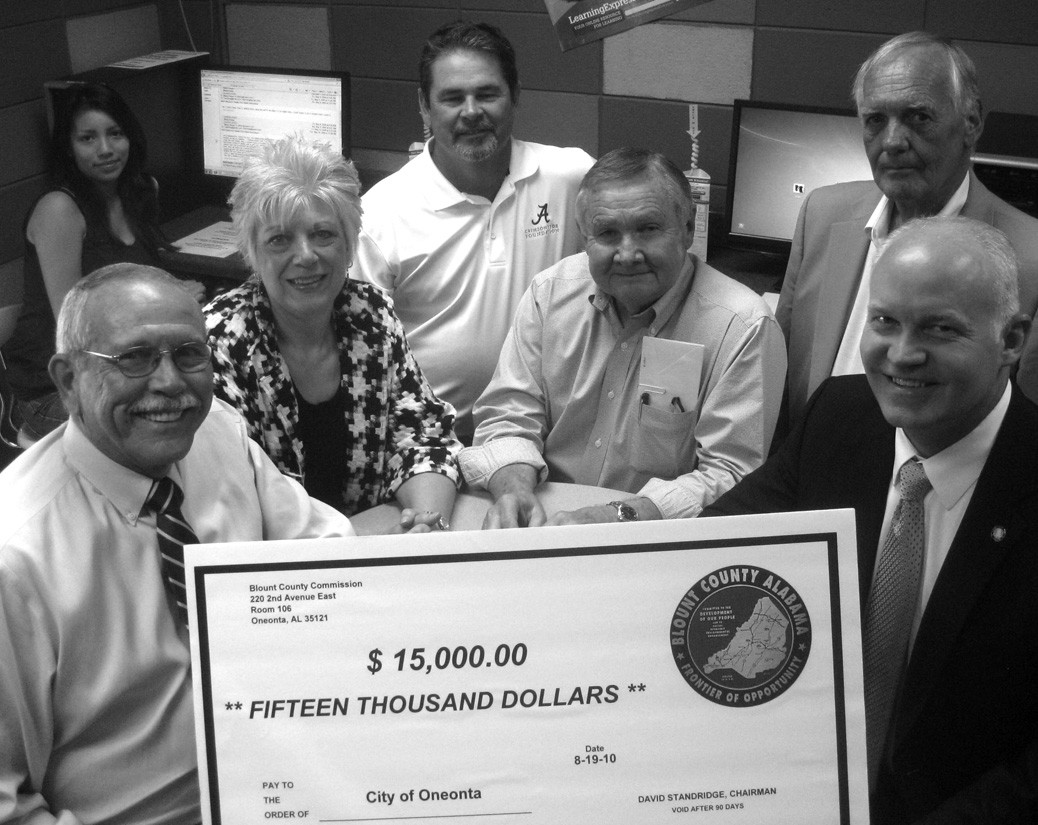 Oneonta Public Library gets $5000 for new laptop computers to be used for computer training at the library as well as for seniors at locations off site. Head librarian Gail Sheldon said she hopes to be able to buy eight new laptops. Foreground (from left), Mayor Darryl Ray, librarian Sheldon, city manager Lowe, state Rep. Thomas, Sheriff Arrington, Probate Judge Standridge. In the background is library patron Daniella Verdin, exercising her exclusive privilege as a teen to use the library’s “Teen Zone,” a designated nook of computers, reference material and young adult literature for teens only. Sheldon allowed a special dispensation for officials bearing gifts.

Not shown are checks of $3000 for Nectar, $3000 for Hayden, $2000 for Rosa, $1500 for PALS (People Against a Littered State), and $2000 for the School Ambassador Program administered by the Blount County Cooperative Extension Office.