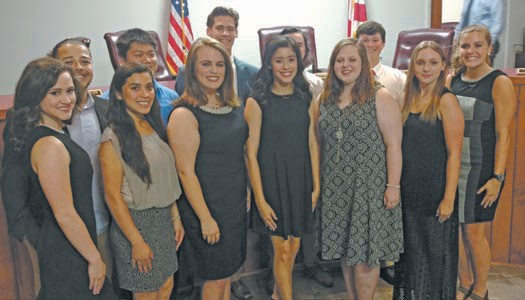 The abatement is for $150,000 or three years – whichever comes first – and is for non-educational sales tax.

During a public hearing held before the regular council meeting, city attorney Alex Smith said that sales taxes would be collected but the non-educational monies would be returned to Swamp Tails for a period of three years or up to a total of $150,000.

There was one speaker who opposed the plan at the public hearing. David Butler, one of the owners of Wood Fire Grill in Cleveland, engaged in a back-and-forth conversation with Oneonta Mayor Ross Norris.

Butler said the city stands to lose money in the long run because the tax abatement offered to Swamp Tails didn’t represent a “level playing field” for competitors.

Norris explained that the abatement offered to Swamp Tails was common and that the revitalization of the downtown area was crucial to the city. He told Butler, who had mentioned the possibility of opening a second location of his restaurant in Oneonta, that abatements were negotiable and that he would love to talk with him if they decided to pursue a location in the city.

Smith reiterated that the final agreement on the abatement was a compromise and was not what was originally requested.

In other business, during a pre-meeting public hearing, the council learned that A-Med Ambulance Service – based in Altoona – had withdrawn its permit request to operate in the city. Blount EMS representatives were at the public hearing and answered questions about their company, which is the only company licensed in the city of Oneonta.

There was discussion that Blount EMS will have to contact other companies to use as a rollover option for times of heavier calls.

In personnel actions, the council approved the resignation of park and recreation employee Adam Mills and subsequently approved the advertising of the vacancy for employment.

Norris and a couple of councilmen asked about the commission needing to work with city building inspector Andy Alexander.

Phillips said the new organization would prepare by-laws and a city ordinance to present to the council for approval within 60 days.

In a separate issue, Wilson’s report from the chamber of commerce included the presentation of the newly established Oneonta Ambassadors for Oneonta High School.

Schools in the Blount County system have long had an ambassadors program and Wilson has worked with Oneonta Superintendent Michael Douglas and other administrators to start the program at Oneonta.

The council recognized the monthly winners from the beautification board – Pounder’s Restaurant (commercial) and Kevin and Carrie Towns (residential).

Clem said the OBA had purchased six benches from Hornsby Steel to place throughout the downtown area. The benches were being painted but would be read for the June Fling.

Clem thanked the city for their help and support of the OBA and the June Fling and invited all in attendance to attend the event and the Singing Showdown.

Prior to going into executive session to discuss pending litigation, the council set a pair of public hearings for Tuesday, June 13.

The first, at 5:15 p.m., will be for the review of liquor license application for Pounder’s. The second, set for 5:20 p.m., will be to amend the alcohol ordinance to change fees and language pertaining to the lounge definition.

The council’s next regular meeting will follow the public hearings at 5:30 p.m. on Tuesday, June 13.