Controversy over use of county roads builds toward February climax 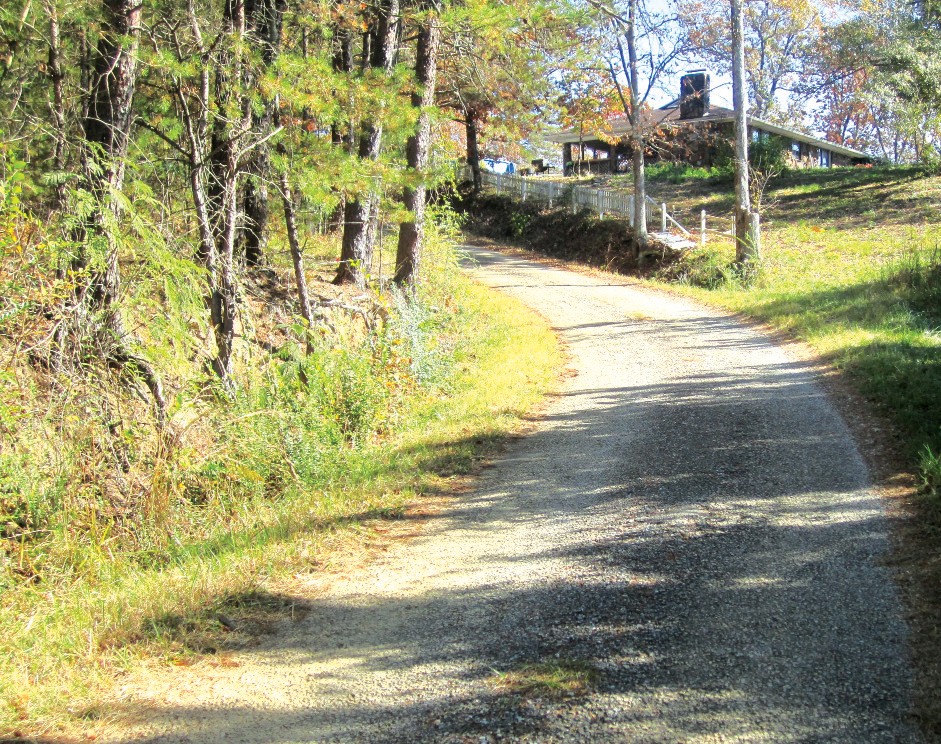 Symbol of a brewing controversy. Skinner Road: a quiet, narrow, quarter-mile road with a crumbling tar and gravel layer, serving half a dozen residences off Elvester Road in west Blount County. Logging operators requested use of the road in 2011 to conduct timber removal. They agreed to use another route when asked at the time. Since then, controversy over use of other county roads by loggers has escalated, resulting in a lawsuit against the county, with ramifications throughout the state.

Both parties to the lawsuit – attorneys for Blount County and for the complainants – were given an opportunity to comment on the case and on this article. Both declined.

At issue are at least three conflicting elements: (1) the right of private interests to use county roads for commercial purposes, (2) the responsibility of public interests – county government – for maintaining costly infrastructure paid for at public expense and to protect public safety and welfare, and, (3) the extent to which a governmental entity may go – or not go – to protect the public investment by holding private interests accountable for damage which occurs as a result of commercial operations.

In this particular case, the commercial interests relate to logging: landowners (who also help pay for the public investment), commercial logging brokers and operators, and their trade association, the Alabama Forestry Association.

But the logging industry is not the only one which uses the roads, subjecting them to accelerated deterioration in conducting their operations. Also involved are other industries which make use of vehicles carrying unusually heavy loads in the routine conduct of business: concrete trucks, coal trucks, triaxle dump trucks, building supplies delivery trucks, garbage trucks, beer trucks, poultry supplies delivery trucks, and others.

All have, at one time or another, been mentioned in commission discussions in recent years as causing specific damage and/or contributing to greatly accelerated deterioration of county roads, causing them to require expensive resurfacing before reaching their normal replacement life. Taken together over the years, all have occasioned chronic complaints from the public, and a growing financial strain on county road budgets. The county side

The following quotes some points and paraphrases others made by District 1 Commissioner Allen Armstrong in a Blount Countian interview concerning his dealings with timber operators:

•“Some logging operators do a great job,” Armstrong said. “They’re easy to deal with, even when road damage occurs. A lot of the of the time, you almost never know they’re there.”

•Others are negligent, oblivious of the damage they do, and unwilling to be held accountable for it, he said.

•Why did Armstrong ask certain logging operators to post a bond? Lots of reasons, he said, all related to likely damage requiring expensive repairs to the roads in the event of their using them. Three examples: (1) on one previous occasion, loggers drove a tracked bulldozer for half a mile down a county paved road; (2) they dragged logs down a road to another loading area, rather than making provisions for loading them without dragging them down the pavement; (3) they filled ditches with dirt, rock, or logs, rather than installing a pipe to assure proper drainage to keep the road surface free of mud and moisture.

•County roads are not like state and federal roads: they’re not designed to handle 80,000-lb. loads, a standard weight for a properly-loaded logging truck. Properly designing them to meet such specifications could cost upwards of $300,000 per mile, according to county engineer Winston Sitton, because many roads would have to be re-engineered, rebased, reconstructed, and repaved. Multiply that figure by approximately 1000 miles of county paved roads to get a rule-of-thumb indication of the staggering financial magnitude of such a task: $300,000,000.

•“We don’t have as good a roads as we should have in Blount County,” Armstrong said. “We don’t have enough money to keep them all maintained the way they need to be. As commissioners, we’re just trying to keep what we have where they’re usable and safe for the general public,” he said.

•Logging trucks operate at speeds hazardous to other drivers; at least three have overturned on District 1 roads in the last two years, jeopardizing other drivers.“It’s a matter of public safety,” he said. “They’re driving too fast to meet time constraints that have been put on them. That’s just not safe for other people on the roads.”

•Trucks of all kinds overturn from time to time. Most companies clean up the spillage immediately. Logging operators too often don’t, he said. A load of logs spilled when a truck overturned on U.S. 31 in July. As of last week, the logs remained on the side of the road where they were pushed after the accident.

•“A security bond is like an insurance policy for citizens,” Armstrong said. “It guarantees that there will be at least some money available to repair damage they do to roads where a big logging operation is using them.”

•“If we don’t get proactive now and start taking care of what we’ve got by holding people accountable for the routine, systematic damage they do, these rural paved roads will all end up going back to dirt,” Armstrong said, concluding the interview. The timber side

The following points are paraphrased from the lawsuit filed by timber interests against Blount County and Allen Armstrong.

•Access to certain parcels of the 3200 acres in question is limited, making it necessary to use Dean’s Ferry, Elvester, and Commissary Roads to perform timber operations.

•Operators had significant difficulties, including long delays, in getting permits from the commission to access these and other roads.

•Armstrong insisted, without legal authority, they say, that the logging company post a $50,000 bond as a condition of receiving a permit.

•Commissioners in other districts allowed access to county roads without requiring a bond.

•Other heavy haulers using Blount County roads were not required to post bonds, or even to get permits.

•Once permits to the needed roads were granted, weights limits of 20 tons were posted on them by the Blount County Commission. The lawsuit states that these were the only three roads in the county with a posted weight limit at that time (summer of 2011).

•Weight limits reduce the loads trucks could haul from 88,000 lbs to 40,000 lbs. Timber operations are not economically profitable or feasible under those constraints.

•This deprives the landowner of meaningful use of his property, and timber operators and workers of their livelihoods.

•The owners filed a claim with the Blount County Commission for $1,453,000 for loss of value to the affected lands. Timber operators filed claims totaling $50,000 for loss of employment income.

•Weight limits imposed by the county are rendered unenforceable by Act 2012- 257 passed by the Legislature in April 2012.

•The lawsuit also alleges interference with reclamation agreements of several Blount County landowners with the state of Alabama. Benchmarks of the developing controversy

Below are some of the legal benchmarks and other developments that have shaped – and continue shaping – the controversy.

•An attorney general’s opinion of Nov. 12, 2003, advised the Coosa County Commission that it could legally impose weight restrictions on roads and bridges within its jurisdiction. The opinion also said the commission could require permits and charge fees for them for use of county roads and impose security bonds under certain circumstances and conditions.

•The lawsuit against the Blount County Commission challenging those practices was filed initially early this year in federal court by River Bend Plantation (the successor organization to TD Farms, both owned by Todd Palmer), the Alabama Forestry Association, and others, then refiled in October in Blount County Circuit Court.

•The Alabama Legislature in the 2012 regular session passed HB538, known as the Logging Notice Act. The law allows county commissions to adopt an ordinance requiring timber owners to file notice with the county commission before using the public roads in connection with harvesting timber.

•Later in the year, the Association of County Commissions of Alabama (ACCA), which had collaborated with the Alabama Forestry Association in developing the Logging Notice Act, created a model ordinance based on the act and notified county commissions of its availability. The model ordinance is a somewhat complicated document embodying a system of half a dozen forms for the parties to use in notification of timber operations, acknowledgement of notices received, notices of deficiencies, and specifics regarding compliance/ noncompliance, deadlines, citations, fines, and other details. In the rather elaborate machinery of the ordinance, there is no reference to permitting or to posting of weight limits on roads, though there is provision for requiring security bonds in the event timber operators are issued citations for noncompliance with the terms of the ordinance.

•The Alabama Forestry Association objected to the action by the ACCA and in an Oct. 16 letter to the Elmore County Commission stated “…the model ordinance appears to violate the law in many respects, and if adopted, may be invalid.” The letter then enumerated three objections to the model ordinance.

•The Alabama Forestry Association, in an Oct. 18 letter signed by general counsel Thomas J. Saunders, corresponded with landowners in Blount County, criticizing District 1 Commissioner Allen Armstrong and former Commission Chairman David Standridge by name. The letter complained that Armstrong had made it difficult for a Blount County landowner to get permits to use county roads in connection with harvesting timber on a large tract in west Blount County. The letter further said Armstrong “without legal authority” insisted that a $10,000 bond be posted for use of county roads. The letter expanded its accusation to include “the other county commissioners and most importantly Chairman of the Commission David Standridge,” who, the letter said, “had ample opportunity to make this issue go away… and chose not to do anything.” The letter asked for landowners’ support.

•The Blount County Commission, in a special meeting on Oct. 30 called for another purpose, unanimously passed the model logging ordinance as initially designed by the ACCA.

•The ACCA responded on Nov. 6 to the logging industry’s concerns by notifying the commission chairman and county engineers that it was recommending “slight changes” in the notice process and forms contained in the model ordinance to make it conform with the Logging Notice Act as now embodied in the Code of Alabama 23-1-80.1. The association also developed a revised model ordinance incorporating the changes, and recommended that commissions that had adopted the initial ordinance vote to adopt the revised version.

•The Blount County Commission adopted the revised model ordinance at its monthly business meeting on Dec. 10.

It is not known at this time whether the logging industry will accept the ordinance in its revised form, or perhaps act against the ACCA and the ordinance itself.