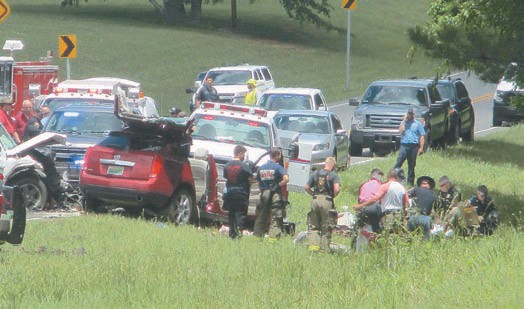 This head-on collision May 23 on Ala 79 near Green’s Chapel Church left three dead.

The Blount County Commission has called a community meeting for concerned citizens and first responders to discuss the outbreak of fatal accidents on Blount County highways over the last month. The meeting is scheduled for the Cleveland Community Center on June 5 at 7 p.m.

According to District 4 Commissioner Nick Washburn, who initiated the meeting, the location could be changed to the Cleveland High School Gymnasium due to the number of people who have expressed their concern over the unprecedented number of fatal accidents occurring in a short period of time. Residents should monitor the Blount County Commission Facebook page for further information if a change in venue is deemed necessary.

The meeting was triggered by the unusual number of traffic fatalities in the county, with 911 records showing four accidents involving a total of six fatalities during the two weeks beginning May 14.

“When the meeting notice was originally posted, 16,000 people had viewed in within the first few days,” Washburn said. “That was the number last Friday. Over the weekend the number jumped to 31,000 with 350 shares,” he said. “That shows you how aware and how concerned people are about this.”

The objective of the meeting will be to generally raise awareness among residents on the need to galvanize safety awareness among the driving population. Officials who have commented on possible reasons for the outbreak have focused on inattention to vehicle operation due to use of electronic devices – distracted driving – and excessive speed.

“I’ve never seen a concentration of fatal accidents like this in 40 years,” said Sheriff’s Department Operations Officer Tim Kent. “But I know one thing. We’re going to slow people down, and pull them over if we see anyone texting while they’re driving. You’ve got to keep your eyes on the road at all times. It doesn‘t take but a split second of your gaze or your mind wandering to cause an accident. “

Coroner John Mark Vaughn, who has attended all fatal accident in the county remarked, “I strongly suspect cell phone and texting are involved in many of these cases, but I can’t prove it. “ He added that witnesses to two accidents involving head-on collisions reported that one vehicle drifted into the traffic lane of an oncoming vehicle, then was seen to swerve suddenly back toward their own lane, but could not make it in time before colliding.

“The options on these new cars are fantastic,” Vaughn said, “but they are concentrated in the middle of the dashboard where your eyes have to leave the road, focus on the dash, then return and refocus on the road. Meantime, your vehicle may have strayed into the oncoming lane. You’ve only got one job when you’re behind the wheel of a vehicle, and that’s to focus all of your attention on driving. If two vehicles both going 60 miles an hour collide head on, it’s the same as hitting a wall at 120 mph, and the things that does not only to flesh and bones but to internal organs as well are hard to believe,” he said.

Washburn said a sentiment he’s heard expressed several times is that residents “feel like they know every one of the victims. “

“I felt like we needed to have this emergency meeting to try to figure out what we can do. The fact that it took off on Facebook like it did tells me other people must think so, too,” he said.