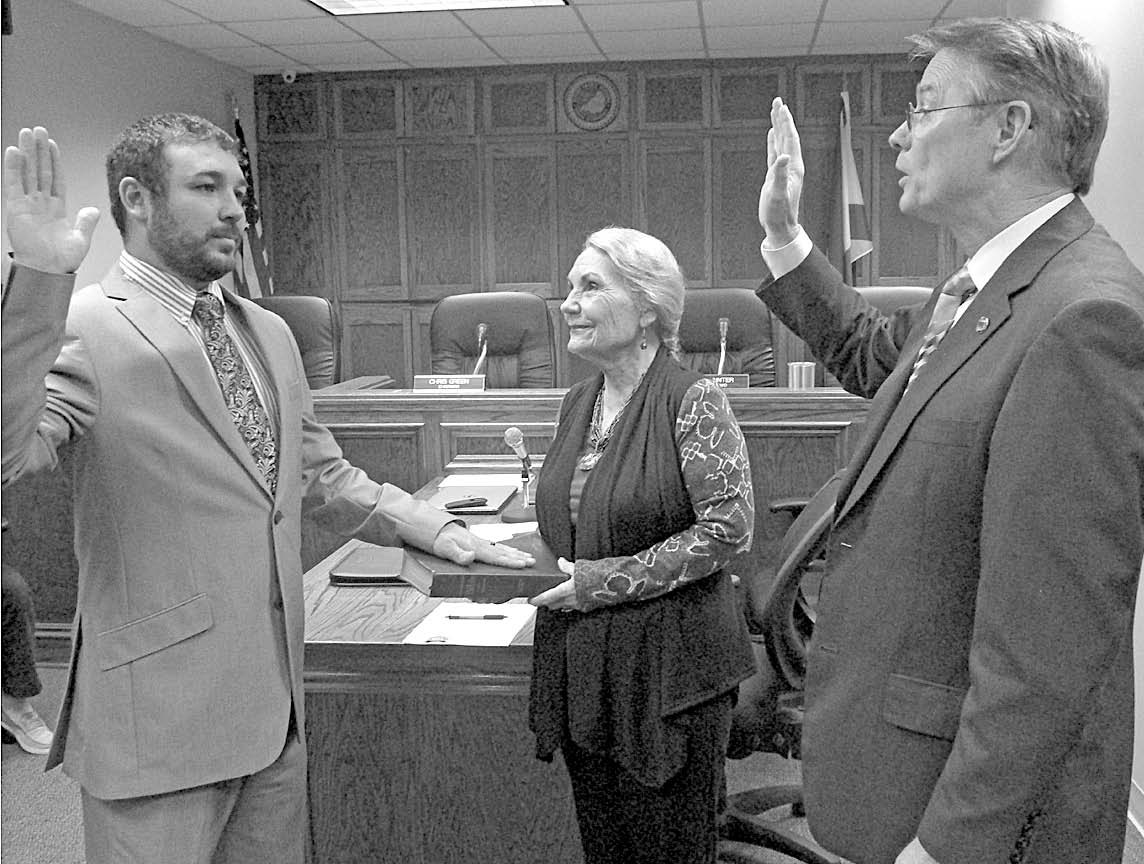 From left, new District 4 Commissioner Nick Washburn is sworn in by Commission Chairman Chris Green as Nick’s grandmother, Charlene Story, assists in the ceremony. Washburn thanked his supporters and relatives for attending the event, and thanked the community for their support and for giving him the opportunity to serve.

Two new commissioners, Mike Painter of District 2 and Nick Washburn of District 4, were sworn in last Wednesday for four-year terms at the first meeting of the 2016-2018 Blount County Commission. The terms of District 1 Commissioner Allen Armstrong and District 3 Commissioner Dean Calvert will expire in 2018. 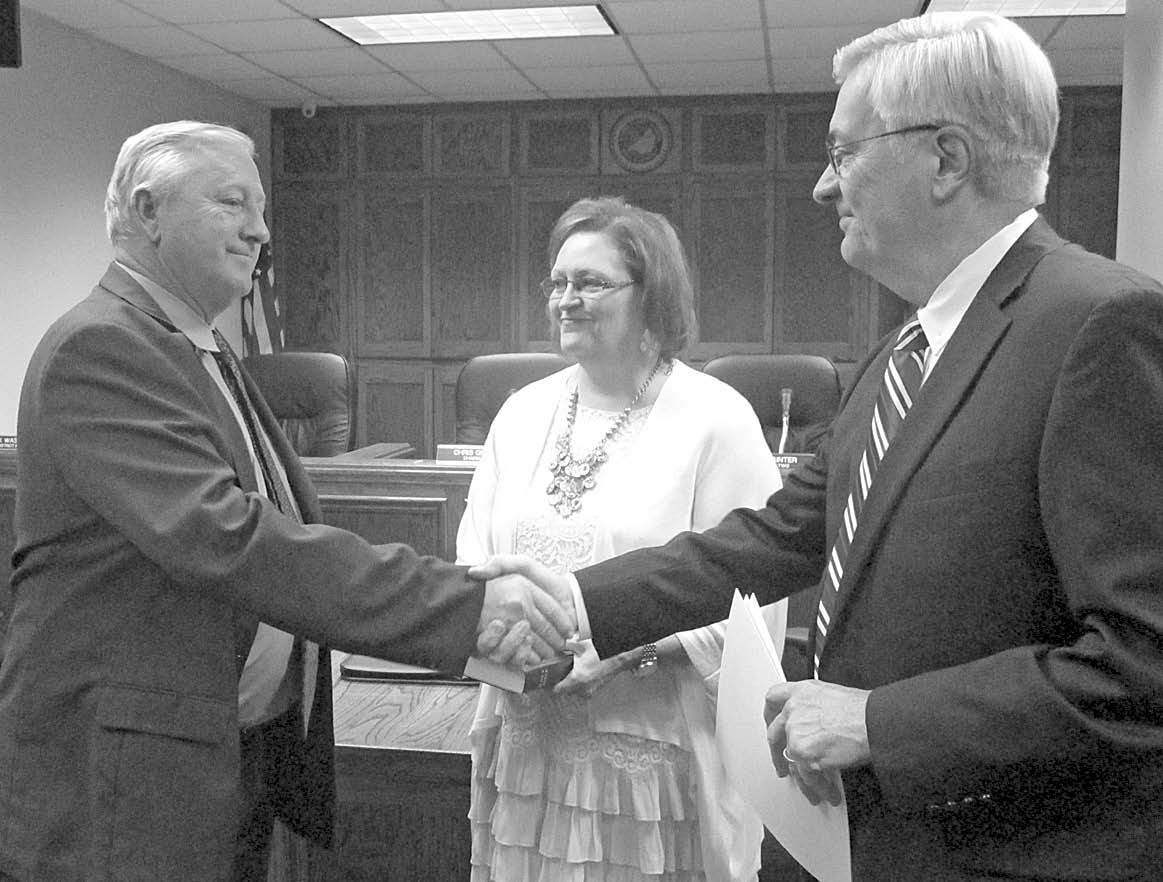 From left, new District 2 Commissioner Mike Painter receives congratulations after swearing in as his wife, Brenda, looks on. Drug court Judge John Dobson administered the oath. Painter spoke briefly after the ceremony, thanking his former teachers and coaches, Dobson, and his father for their influence, promising to work first, for the good of the entire county, and second, in the best interests of District 2, during his term of office.

As its first item of new business, the new commission unanimously affirmed a resolution to levy the 1-cent sales tax following the affirmative referendum of Blount County citizens at the polls on Nov. 8. The resolution includes the language of the legislative act authorizing the referendum, specifying details governing tax collection, as well as disbursement of proceeds to the recipients: county school systems, municipalities, fire departments, and the commission itself. 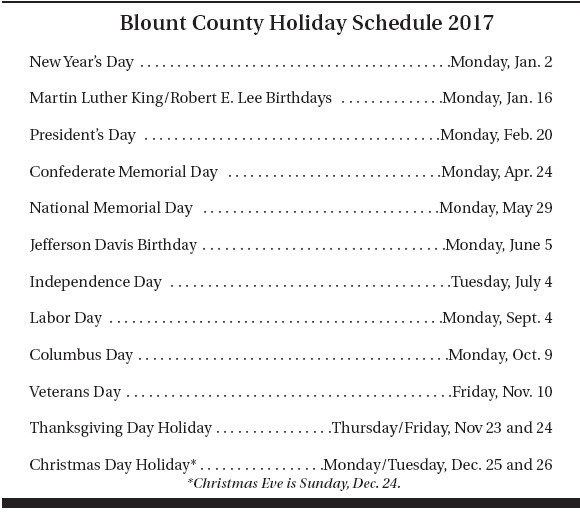 Restrictions on use of tax proceeds by recipients are delineated. The effective date for the tax to begin is Jan. 1, 2017.

The commission unanimously approved a request from Julia Cleland, self-identified as an associate of Shree Lovett, the National Day of Prayer (NDP) Alabama state representative, to organize and conduct a Bible reading marathon outside the courthouse in Oneonta in connection with the May 4, 2017, National Day of Prayer observance.

The Bible reading marathon “is an event where people of all ages read the Bible publicly, starting in Genesis and continuing through Revelation in 15- minute time slots, without stopping,” according to Cleveland’s e-mail request. It would start Thursday morning, May 4 and continue until Saturday, May 6, or Sunday, May 7, whenever the reading is completed.

The event would occur concurrently with, but separate from, the traditional prayer service conducted by local churches on the steps of the courthouse on the National Day of Prayer. Whether the event is actually staged depends on organizers’ ability to recruit enough individuals and groups locally to con- duct the continuous reading over a three- to four-day period. In other actions, the commission

• approved the 2017 holiday schedule, based on the state of Alabama schedule (see chart at right).

• approved the Blount County Multi- Hazard Mitigation Plan; the plan identifies hazards that could affect the county, creates a unified approach among communities for dealing with them, and serves as a guide to reduce community vulnerabilities.

• tabled action on a request for an exception to the revised retiree health insurance policy to allow county attorneys to research the subject further.

The full commission and commission chairman were present at the Nov. 6 business meeting. At its organizational meeting following the swearing-in of new commissioners, the commission confirmed that the monthly meeting schedule will remain the same for 2017. Unless changed to accommodate a pressing schedule conflict, the regular business meeting will be on the second Monday of each month, and the monthly work session will be on the preceding Thursday. Regular meeting time for both is 9 a.m.

As it happens, the next work session conflicts with the Association of County Commissions of Alabama (ACCA) Legislative Conference. That work session will be rescheduled to Monday, Dec. 5. The next business meeting will be at the regular time, Dec. 12. Both meetings will be at 9 a.m. in the commission boardroom at the courthouse in Oneonta.