County has...‘come a long way, overcome a lot of obstacles’ 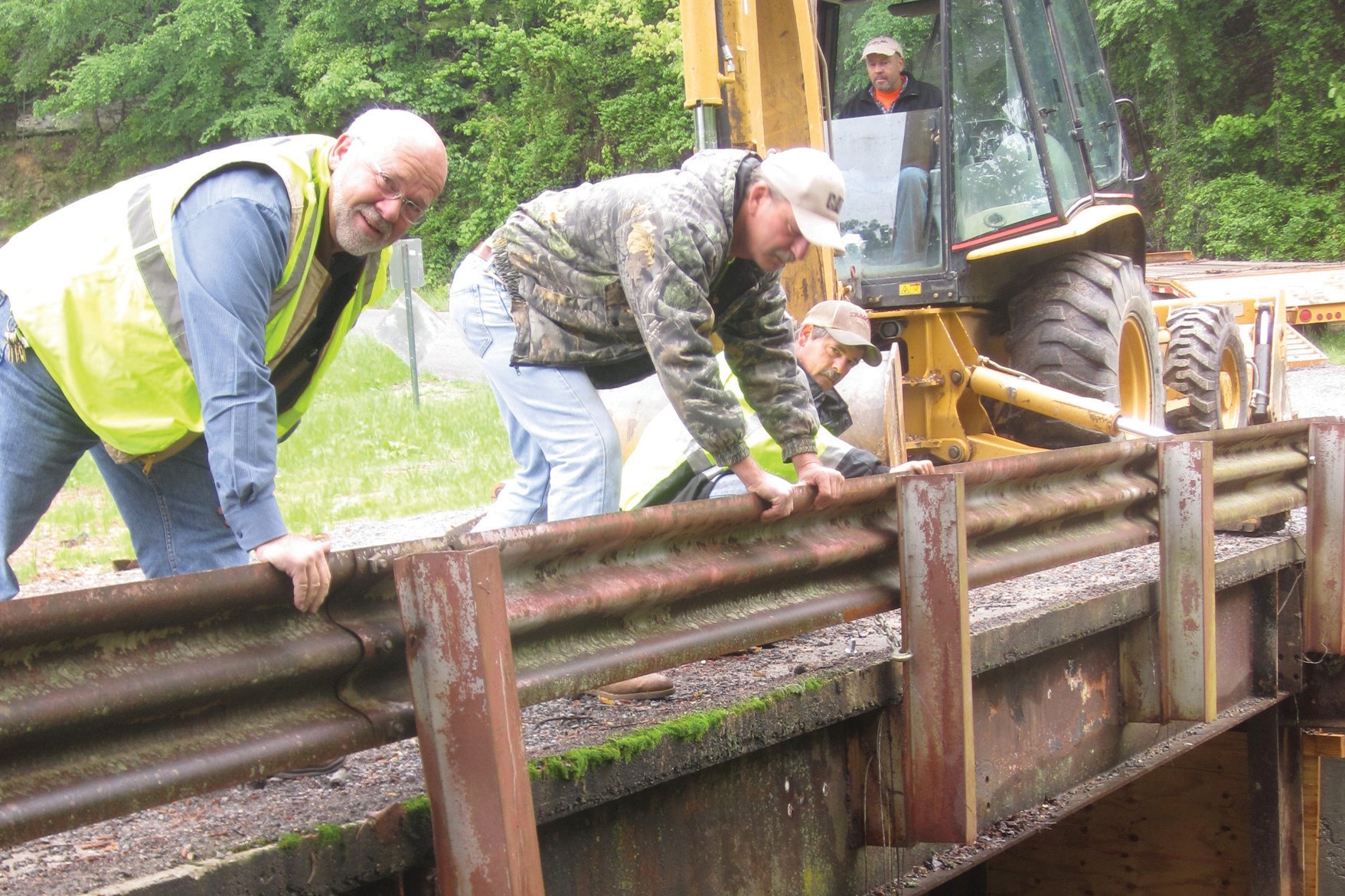 District 4 crew, from left, Commissioner Gary Stricklin, foreman Rob Branham, Rodney Burns, and David Gargus (in loader) work on bridge over Beech Branch on Horton Mill Road. They rebuilt abutments to the bridge, repaired the guardrail, and were reinstalling it the morning this photo was taken. The guardrail on the other side was missing and will be replaced, too.

With new District 4 Commissioner Gary Stricklin (just sworn in this past November), a resounding note of the interview was struck well over halfway through the session with this answer: “I would say, based on what has happened within the county administration, that it’s come a long way and overcome a lot of obstacles. With the changes that have been made, Blount County has a lot to look forward to.”

The question was: “If you had one minute to speak directly to all residents in the county about their county government, what would you say?”

Follow up question: “Are you referring to a time basically going back to last summer?”

That answer brought into perspective the following answer to a seemingly unrelated question much earlier in the conversation. “The county has overcome so much in the last year and had so many changes even since I came on board, I feel like we are just now ready to go forward. We’ve got a great staff, people who want to see the county go forward, we all get along well, it’s just…to be able to work with the quality people we have at the commission, I feel I’m very blessed. They’ve accepted me the way I am and I’ve accepted them and they have done all that they can do to make my job easier.”

Stricklin is owner of Stricklin Services in Cleveland. It is being managed by his son during his term as commissioner. A question comparing work in private business versus working for county government seemed like a good place to begin the interview.

“As far as the difference,” he said, “I enjoy working for the county, maybe more than my business, in a way. It’s less stressful. You have plenty of work to do, and an established budget to work under. My job is to work as efficiently as possible to make the money go as far as it can be made to go. In my business, I had to look for work, sell my services, bid jobs, order materials, organize the project and so on. There was a larger range of problems to cover.”

What’s been your experience in dealing with the public? Stricklin: “We have two kinds of calls: complaints and people relaying information about problems we need to be aware of. We have more of the relaying information type. Of course, the women in the commission office deal with them first and they’re the ones who may get more of the complaints. By the time I talk to them they may be more ready to relay information. I try to return all calls, let people know I got their message, and tell them when we’ll be able to get to it and why. Once you explain to them why, they usually understand. I know I can’t please everybody, but I do try.”

What aspects of the job do you worry about most? Stricklin: “Making sure I do the job right. In my business, when I made my mind up to do something, I went and did it. Sometimes with the county, you have to follow administrative procedures and protocol, like when you purchase something,

for example. I want to make sure I follow those procedures and don’t bring reproach on the county. I’m fortunate that the road crew has accepted me and they’ve got far more knowledge on road work than I do, so I don’t have to worry about that so much. My own biggest concern was that I wanted to improve the way we install culverts under paved roads. You know, a lot of the time after you put in the culvert and pave over it, the ground settles and you have a dip in the road where the culvert crosses. I thought I knew a way from my past experience to improve that. I lay down a bed of 78 (a grade of limestone rock of moderate size), then fill in around it. I top it off with a layer of finer crushing run rock then pave over it. We’ve put in 15 or 20 culverts that way, and we’ve only had to go back on one or two of them.”

What have you found to be your district’s major needs? Stricklin: “More money. I’ve been asked to do a job with X number of dollars. I’m trying to use equipment and personnel to accomplish the most I possibly can with that money. But we can’t get the roads where people want them without more funding. I’d like to have a new Motrim roadside mower. That would help us get the roadsides back in shape. It would also make the Motrim we’ve got last longer, because we wouldn’t have to be running it constantly.”

If you could name a sum of money you’d like to have to address all the district’s needs, what would that figure be and how would you spend it? Stricklin: “Now, I don’t want to get into that discussion. I don’t necessarily want to repave all my roads at one time. Realistically though, if you could double the annual budget for each district, it would provide ample money to set some realistic goals – not give us everything we want – but enable us to set more realistic goals to meet the needs.” (Current district road budgets fall between $904,000 and $977,000 this year for all four county districts –Ed.)

What county-wide problems concern you? Stricklin: “I wish we could give county employees a raise. It would be good if the county could give them a raise or an additional benefit. But under the economic circumstances and economic stress the county is under, I can’t see where we can do that at this time. They are deserving. Inflation has increased, especially food and fuel – it’s unreal what it costs to feed a

family. I’ve got a personal opinion about that, but based on the county’s finances, I need to leave it at that.”

What’s the current status of dividing the probate judge and commission chairman job? Stricklin: “It’s going to be discussed. It’s hard to talk about adding another employee when you can’t give increases in wages or benefits to the employees you already have. But if the positions were split, it would give the chairperson time to work in Montgomery to bring more money into Blount County. That’s something we have to show people – not tell them – but show them, then let them vote on it. If we all agree, we’ll probably go out this summer and begin talking to people about this. You’ve got to give them some examples of how this might work, not just tell’em to take our word on it.”

When might it come to a vote? Stricklin: “It would probably be 2014. That’s an election year. That would be my thought on it.”

Accomplishments Though he has had only six months on the job, Stricklin listed the following items as examples of work accomplished.

To do list
•Working to get grant approved to provide public water to residents on Kiowa Road.
•Working with towns of County Line and Locust Fork to address road repair matters.
•Working to provide handicapped parking and entry ramps for handicapped access to voting locations at Cleveland and Dallas-Selfville fire halls, and at Pine Mountain Community Center.
•Tentatively plan for 12 more miles of repaving next year.