AMONG OTHER MAJOR ACTIONS... 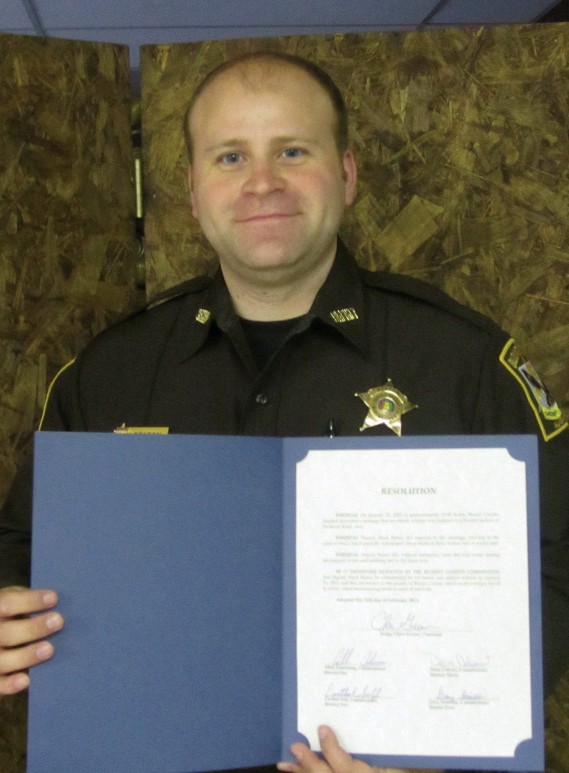 Deputy Mark Staton was commended at the commission meeting Monday for his “heroic and selfless actions” on Jan. 15 when he rescued an elderly woman trapped in her flooded vehicle on Ricetown Road. Staton waded across some 100 yards of waist-deep water to the stranded vehicle and carried the woman to safety. His actions should “stand as an example for all to follow when encountering those in need,” the commendation read.

In a business meeting that seemed from the agenda to bode for a speedy and simple conclusion, the outcome was anything but that. As the end of the agenda approached at a brisk pace, District 3 Commissioner Dean Calvert requested permission to amend it by adding four items of business, all requiring contact with the county’s legislative delegation. And things slowed down noticeably as the surprise items were added to the agenda, clarified, discussed, rendered in the form of motions, and ultimately approved.

When the smoke cleared, the commission had rescinded two high-profile resolutions just passed in the previous business meeting and passed two new resolutions – one potentially far-reaching – to forward to Montgomery.

In another action unrelated to the legislative delegation, commissioners voted – after going into executive session – to remove all weight limits on county roads, thereby removing a major bone of contention in potential lawsuits, including one currently pending, while at the same time taking a step back from their previous, aggressive posture on protecting taxpayers’ investment in the condition and longevity of county roads.

Below is a summary of each of the five actions. The commission voted to:

(1) Request that the legislative delegation pass a local law providing for a full-time elected commission chairman in Blount County, thus separating the present dualrole job of probate judge/commission chairman into two separate jobs. Reasons cited for the move related to growth of county population (said to have doubled since the 1970s) and the associated increase in the number and complexity of transactions involving county government with the resulting increase in workload for both jobs involved. Only 13 Alabama counties including Blount still have the two functions combined in one job. Implications and details of that initiative will be further explored and decisions finalized in a special called meeting for that purpose on Feb. 25 at 9 a.m.

(2) Request that the legislative delegation pass a local law requiring all citizens signing petitions for alcohol referenda in Blount County to present formal identification at the time of signing and that such identification be witnessed by an official county representative at a designated government office in the county, such as the probate office in the courthouse, a town hall in the case of a municipality, or other designated location.

(3) Request that the legislative delegation disregard the commission’s January resolution asking the delegation to pass a local law requiring out-of-county residents purchasing or renewing their driver’s license in Blount County to pay a $5 surcharge; no local legislation is desired.

(4) Request that the legislative delegation disregard the commission’s January resolution asking the delegation to pass a local law clarifying the county’s obligation to pay an annual salary supplement of $8,175 to the court reporter for the Circuit Court in Blount County; no local legislation is desired.

(5) Accommodate the request of the Mining and Reclamation Division of the Alabama Department of Labor to remove all current weight limits on Blount County roads in order to allow that agency to operate unhindered in implementing its projects and to allow Blount County to remain in consideration for future federal reclamation projects in connection with abandoned or inactive mining property.

The commission also approved the 2013 tax levy of 26 mills per $100 of taxable property (assessed value) for citizens living in the county. The approval is required annually in order for tax collection to proceed. This year’s tax levy is unchanged from last year.

For county residents, 9 mills of the tax goes to the county general fund to cover expenses of county government, 5 mills to the road and bridge fund, 10 mills to support county schools, and 2 mills to the Blount County Health Care Authority to support hospitals and public health facilities. (1 mill = 1/10 cent)

Citizens of Oneonta pay 25 mills per $100 taxable property to the county plus 13.5 mills to Oneonta to support the city school system.

Sheldon reported that the library will soon be installing a radio frequency identification system to sound an alarm when library materials that have not been checked out approach the doorway to exit the premises. The system should be in place after the week of March 25. She also announced the first Friends of the Oneonta Public Library dinner theater production on March 21, 22, and 23 at Charlie B’s restaurant. The play is entitled “The Foreigner.” Tickets are $40 for the dinner and play, available at Charlie B’s, at the library, or from friends of the library. In other actions, the commission:

•authorized the chairman to hire former state auditor Larry McPherson to complete commission financial statements for 2012 for transmission to the Department of Public Examiners in April. This is a new requirement; examiners have assisted in preparation of these documents in the past, but now require the county to provide them without assistance. McPherson will be hired at a rate of $25 per hour plus mileage from his residence in Argo for a period of two to five weeks, depending on whether financial statements for 2011 (in arrears) and 2013 are also required by the Department of Public Examiners.

•appointed Dean Gilbert of Remlap to fill the unexpired term of Lee Rhudy on the Blount County 911 Board.

•appointed Ken Campbell to fill the unexpired term of Greg Reid to the Blount County 911 Board.

•approved purchase of two Fuelman pumps for county vehicles served at the Snead location; county will purchase one and town of Snead will purchase the second at a cost estimated at $800 (each).

•renewed the MCoal Company road bond due to expire soon, contingent on the county attorney’s further investigation of MCoal’s hauling coal from locations other than its Blount County Rosa mine site to the coal washer located at the Rosa Mine; initial agreement involved use of county roads only for hauling coal from the Rosa Mine itself.

At Sitton’s recommendation, the commission authorized the chairman to sign an agreement with CDG Engineering for services to assist the county in preparing specifications and other required documentation for three Phase 2 ATRIP projects due for submission to the Alabama Department of Transportation (ALDOT). Estimated fee for professional services to be provided is $115,000.

Sitton reported that the Covered Bridge Renovation Project is nearing completion, with the contractor working the final punch list at Horton Mill Covered Bridge. The final completion date should be the latter part of February.

All commissioners and the commission chairman were present at the Monday business meeting.

The next commission work session will be Tuesday, March 5, at 9 a.m. The next business meeting will be Monday, March 11, at 9 a.m. Both will be in the commission boardroom at the courthouse.