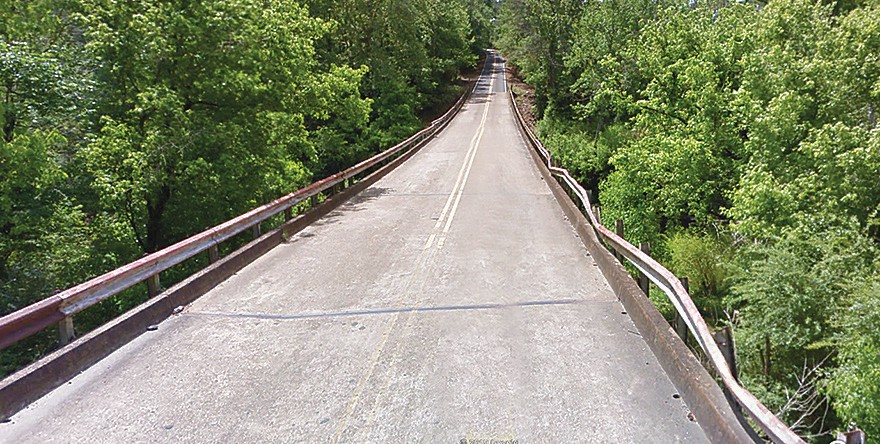 Guard rails on this bridge across Mulberry Fork on County Highway 51 (above) and two other county bridges will be replaced using funds from a $140,749 ALDOT grant. Such grants extend county district road budgets by allowing those funds to be used for other local road priorities. -photo courtesy Dustin Stewart

The Blount County Commission voted unanimously Monday, following an executive session to discuss economic development issues, to purchase four small, contiguous parcels of property in the Rainbow Crossing area from Blue Smash Investments for future economic development and to supply chert for county road improvement operations. The purchase price for the tract was $124,100.

The property purchased is the tract the commission authorized an option to purchase in November, which was exercised immediately. It was associated at that time with possible interest in the site by a metal recycling manufacturing plant, said to be Lee Industrial Services of Huntsville.

A group of area residents appeared at the November commission work session to ask questions about the prospective economic development project, to express their displeasure over not having been informed at the outset of discussion about the company, and to register their concern over the possible impact of the plant on air and water quality in the immediate vicinity.

Commission chairman Chris Green told the group that their interest came early in the vetting process for the project before complete information was available and that a public hearing would be scheduled later in the process for them to ask questions and present their concerns.

After the commission action Monday authorizing the purchase of the property, members of the opposed group present at the meeting questioned whether, in the interests of transparency, the public hearing should have been held before the property was purchased by the commission, particularly since no further information about the prospective industry has become available since November.

They also produced documentation from amendment 772 of the state Constitution which appears to specify a process including a formal resolution to purchase property for economic development by the commission and seven days’ public notice in a newspaper of mass circulation before the action to purchase property with public money for economic development purposes may be taken.

Report on other commission business

• approved Feb. 24, at 10 a.m., as the time for the official dedication of the Blount County Freedom Bridge, located on Jones Chapel Road, at its intersection with County Highway 27.

• appointed Charles Smith of Cleveland to fill the unexpired term of James Sullivan on the Palisades Park Board; the term expires in September.

• authorized chairman to execute the annual agreement with the Association of County Commissions of Alabama (ACCA) for the Self Insurance Fund, and declarations associated with the property program.

• adopted a resolution calling for unity among all Blount Countians in honor of Martin Luther King Jr.’s birthday, to be celebrated Jan. 20.

• approved a proclamation in honor of Robert E. Lee’s birthday, to be celebrated Jan. 20.

• approved signage to recognize sources of the $350,000 funding for the Community Development Block Grant road improvement project for Black Road, Mount Road, and Mount Hebron Road in District 2; verbally approved extending such signage recognition to all road projects involving funding from grants or other sources from outside the county, i.e. from outside the county budget.

• received notice that metal detectors for the courthouse and Family Services Center are scheduled for delivery on Jan. 21 and for assembly on Jan. 23; they are expected to be placed in service for public use as early as Thursday, Jan. 23, or as late as Monday, Jan. 27, depending on time to complete assembly and installation.

• Animal Adoption Center – $35,536 total from donations from all sources.

At the recommendation of county engineer Dustin Stewart, the commission approved:

• a resolution to comply with all Alabama Department of Transportation (ALDOT) and federal highway regulations affecting intersecting streets and roads during the planing, striping, leveling, patching and resurfacing of nearly 11 miles of Ala 75, beginning just north of its intersection with County Highway 39 at the Oneonta city limits to U.S. 278 at Snead.

• a petition to vacate a portion of Remlap Drive, subject to routine due process.

Stewart also informed the commission that an ALDOT grant of $140,749 has been approved under the High Risk Rural Roads (HRRR) Program. The grant requires a local match of 10 percent or $15,638. Grant monies will be used to replace guard rails and crash-worthy end treatments on three county bridges, including bridges on County Highways 51, 29, and 33.