MOST ABSORBING SESSION THIS YEAR... 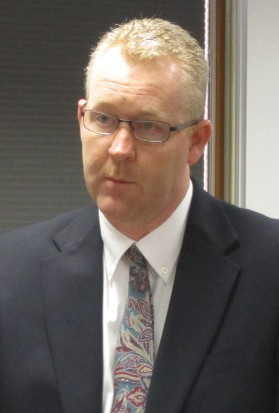 Last Thursday’s commission work session was remarkable for it’s quantity. With more than 50 agenda items, it was about about twice as long as normal.

But it was even more remarkable for quality – the quality of interest conferred on the meeting by its guests and delegations – individuals Scott Coefield, Supt. or groups who of Oneonta City appear before many Schools work sessions to make special presentations to the commission, often involving something they want the commission to do. This month’s session was a doozy.

First, Circuit Judge Stephen King appeared before the commission to ask that it include an additional $8,989 to the 2013 fiscal year budget to pay a portion of the salary of court reporter Cinda Underwood. It had been left out of the 2013 budget. It wasn’t an oversight.

Commissioners had not included the salary item because they had been told last year that 2012 would be the last time the salary supplement would be requested because the court reporter would retire before the 2013 budget year. King said he had only recently become aware of that, and asked the commission to reconsider it’s decision not to fund the court reporter position. In informal discussion, commissioners agreed to put the item on Monday’s business meeting agenda for a yes or no vote.

(In Monday’s business meeting, the commission voted on a motion to amend the 2013 budget to include King’s $8,989 request. The motion, made by District 3 Commissioner Dean Calvert, failed for lack of a second.)

Next, Oneonta City School Superintendent Scott Coefield spoke to propose raising the ad valorem tax rate by 5 mills in the city of Oneonta. The additional revenue, estimated at $340,000 annually, will be used initially to fund purchase of laptop computers for all students, a feature of the city school board’s technology initiative for the system.

The proposed additional taxes would result in an increase of about 11 percent a year on property taxes owed. An ordinary residence with a value of $100,000 would pay $50 a year more in taxes, in the absence of other factors. A business of the same value would pay twice that amount in additional taxes.

Coefield requested that the commission, which must act to authorize any tax referendum in the county, schedule an election on Jan. 15 to allow citizens of Oneonta to vote on the proposed increase. He said the school board will reimburse the county for the costs of the election. He added the system will hold two or three public meetings before the election to explain and justify the need to citizens. Citizens are invited to attend the Oct. 29 meeting at Oneonta High School where Coefield will present the proposal.

(In its Monday business meeting, the commission approved calling the special meeting on Oct. 30 – the day after the school board is scheduled to pass its resolution – to address the school board’s request.)

Then, Honeywell Building Solutions representative Phil Lowery presented a proposal for a “performancebased contract” that would essentially upgrade most, if not all, lighting, heating, ventilation, air conditioning, and water delivery facilities in seven county government buildings in Oneonta, replacing both hardware and software with energy efficient equipment and systems. Many county buildings are operating with HVAC equipment that is at or beyond its normally expected service life, and are not equipped in many cases with the latest energy management and optimization technology. As a result electric bills in particular are considered to be as much as 25 percent higher than they could be with more advanced energy efficient hardware and energy-management technology.

The Honeywell proposal guarantees that the price of the program as negotiated will be completely covered by program energy and operational savings. Preliminary estimate of those savings is $1 million to $1.3 million.

The commission will study the proposal in detail and decide in a future meeting how to proceed so as to assure that all steps in the process are consistent with state bid laws governing such major expenditures for government systems.

(In Monday’s business meeting, to follow through with that intent, the commission authorized the commission chairman to advertise in three newspapers of statewide circulation for requests for proposals from companies qualified to offer a performance-based similar to that described above. County attorney Jeff Sherrer advised the commission that the action would be proper procedure and consistent with state law for contracts involving a public works project where estimated costs are in excess of $500,000.)

Finally, Edward and Cynthia Beasley asked the commission for a variance from subdivision regulations to open a small campground and recreational vehicle park (described as having seven lots) in the Snead area. The facility was described on the work session agenda as a “nudist camp,” although those words were never uttered in the fairly lengthy discussion that ensued.

The commissioners did not choose to do so at the work session and did not schedule the subject for action at Monday’s business meeting. The outcome, though never stated in so many words, seemed to be that a variance was not necessary, because the property usage contemplated was not covered in the subdivision regulations. The Beasleys thanked the commission for its time and left the room.

A complete report of this month’s Blount County Commission business meeting will appear in next Wednesday’s edition of The Blount Countian.