Commission seating in this photo signals… what? 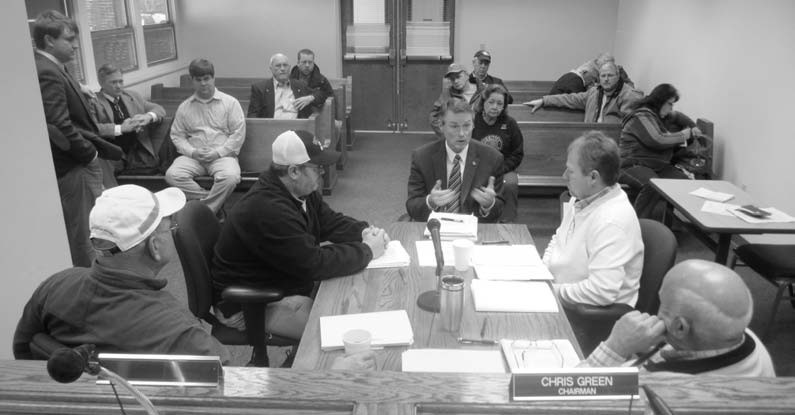 The unusual commission seating arrangement shown here – out from behind their normal panel configuration – signals something unusual is afoot. The final 45 minutes of Thursday’s work session – when the commission migrated en masse to this round table-type seating in front of their normal places – was notable for two things: what happened and what didn’t happen.

What happened: The commission handled the first 18 items on the regular agenda, then skipped to engineering reports, then covered announcements. Then it returned to the final two regular agenda items, took a 5-minute break, then, at 10:45, returned and assembled around the table for an intense discussion of the last two agenda items: item19 – 2015 cooperation and item 20 – 2015 goals and objectives. They agreed at the outset to adjourn at 11:30 a.m.

Then followed possibly the most productive 45 minutes within the last year, with all four commissioners participating in discussion of two important decisions facing the commission this year: whether to buy two expensive pieces of equipment for countywide use – a “pothole” truck and a chip sealer for paving – and schedule their use by taking turns among the four districts. It wasn’t specifically about cooperation (as in “getting along”) and it focused on two specific nuts-and-bolts matters, but the discussion was in depth, effective, and functional.

What didn’t happen: An expected discussion did not occur about splitting the combined probate and commission job into separate positions (which the commission voted to do in 2012) as part of a formal plan to transition Blount County to the unit system of county administration. Commission Chairman Chris Green had said in the December work session that he would submit a plan and packet of supporting materials to commissioners for discussion in the January meeting. Items 19 and 20 on the agenda and the discussion that accompanied them was as close as the commission came to that subject.