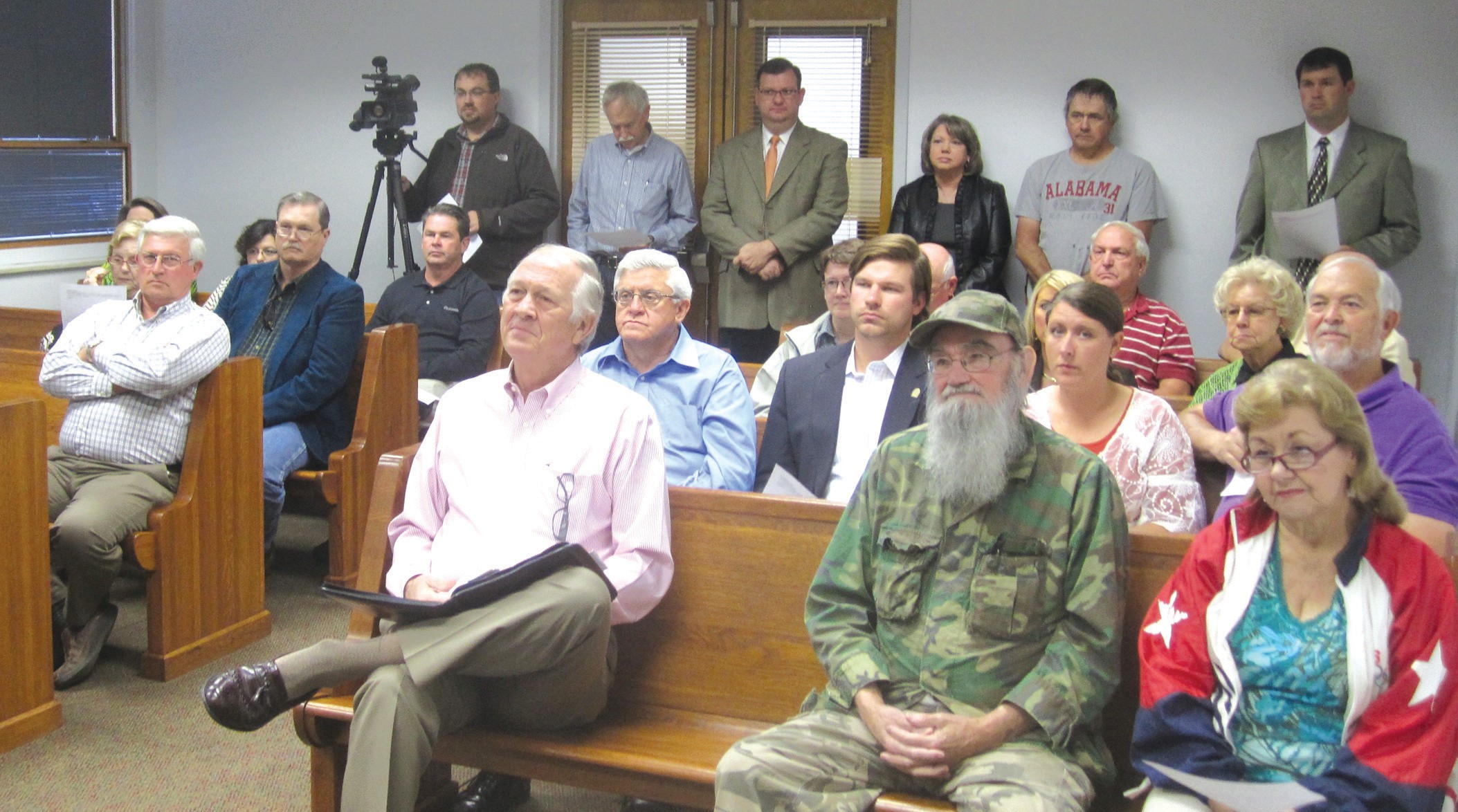 FULL HOUSE. Monday’s commission business meeting turned out a rare standingroom only crowd for the resolution of a postponed decision on funding for what came to be seen as dueling chambers of commerce.

The Blount County Commission voted Monday to divide the $50,000 allocated in the 2014 budget for chamber of commerce activities in the county, with $12,500 going to the two-year-old West Blount Chamber and $37,500 going to the long-established Blount County- Oneonta Chamber. The affirmative vote on the motion was unanimous. Thus ended an important financial chapter in the months-long, sometimes-acrimonious controversy over chambers of commerce in Blount County.

A brief dispute occurred when Commission Chairman Chris Green called for a motion on the 25 percent/75 percent split he had proposed, emphasizing its fairness in light of all factors involved. District 1 Commissioner Allen Armstrong quickly spoke up, proposing a 50/50 split between the two agencies, observing to the chairman, “You can’t make that motion.”

Green responded that he had not made the motion he had called for a motion from the commission on the specific split proposal that had been presented. District 3 Commissioner Dean Calvert then quickly made the motion based on the 75/25 percent split discussed, it was seconded by District 4 Commissioner Gary Stricklin, and the floor was opened to discussion by the commissioners. Green also recognized the spokesmen for both chambers and invited their comments.

Following those comments and before the final vote, Armstrong addressed West Blount chamber executive director Terry Lewis. “Is this sufficient? Are you happy?” he asked. Lewis responded in the affirmative, and the subsequently unanimous vote on the motion was taken.

Excerpts from the remarks of chamber spokesmen:

“…the (Blount County-Oneonta) Chamber has continued to serve diligently amid the challenges of the last few weeks. Questions have been raised regarding performance and contribution. Given the circumstances, it would be easy to pull back and refuse to change. However, that is not the fabric of our members or our board….While we are in the beginning stages of a reorganization, our commitment to serving the community is unwavering. We are united in ensuring that the results and performance of the Chamber moving forward exceeds expectations.” – Brandon Guyton, Chairman of the Board, Blount County – Oneonta Chamber of Commerce.

At the conclusion of the vote, Green asked the two spokesmen to pledge to work together for the good of the county going forward. Both assented. Road matters

The commission passed two resolutions relating to receipt of Supplemental Disaster Recovery Program funding to repair county roads damaged during the tornados of April, 2011. The required resolutions authorized the Commission Chairman to enter contracts with Community Consultants, Inc. of Huntsville to provide grant administration and CDG Engineers and Associates of Birmingham to provide engineering design and inspection services. The project includes repair of two qualifying roads, both in Blount County’s District 2: Maple Drive and a section of Joy Road. The combined amount awarded for the two projects, expected to be announced officially this week, is $758,572.

The commission formally approved two paving projects for 2014, both in District 1. The projects are Old Hayden Rd. (1.25 miles) and county road 7 (3.5 miles).

The commission briefly discussed and passed a series of resolutions to remove nine roads in Blount County from the County Road Maintenance Inspection list used by the state to evaluate road quality during periodic inspections. The resolutions were not available at meeting time, since they are to be provided later by the Alabama Department of Transportation (ALDOT). The roads proposed for removal are those upon which no state or federal funds have been expended for a period of 20 years or more. Yet, scores on these roads are used to determine the county’s eligibility for annual state/federal road funding. The roads to be removed are: county road (CR) 41, CR 38, CR 34, CR 48, CR 11, CR 45, Fat Dunn Road, Mt. Hebron Church Road, and Swann Bridge Road. Pro bono week

The commission passed a resolution designating Oct. 20 – 26 as “Pro bono week” with regard to legal services. The effort is sponsored by the Alabama State Bar Association through its local chapter the Blount County Bar Association. Sample language of the resolution:

“Whereas 13.7 percent of Blount County citizens live in poverty, and

“Whereas, each year low-income citizens of Blount County lack legal assistance for their legal problems…, forcing them to resolve complex problems on their own. and

“Now therefore, the Blount County Commission does hereby proclaim Oct. 20 – 26 pro bono week…” Bill Burns, president of the Blount County Bar Association, said members of the group will sponsor a local clinic early next year to assist those most in need to avail themselves of legal advice and services at no cost. Details of time and place, along with registration information, will be announced as soon as plans for the event are finalized. Sale of County Line Sewer

County attorney Jeff Sherrer reported that the commission’s obligations to the United States Department of Agriculture (USDA) have been met with respect to a loan from that agency used to fund development of the County Line sewer, and therefore should pose no impediment to sale of the facility by the commission. He recommended as a courtesy, however, that the commission authorize him to write a letter to the USDA notifying them of their wish to sell the facility and requesting their express concurrence to do so. The commission granted that authority. In other actions, the commission:

•approved the contract for inmate health care at the county jail with Southern Health Care Partners.

•appointed Sandra Sivley to the Middle Alabama Area Agency of Aging (M4A) as the Blount County representative on that board, with county administrator Zac Marsh as alternate. Sivley is the former administrator of the aging program in Blount County.

•authorized the Bangor Volunteer Fire Department to paint a fire line on Whitewater Drive in District 1 to delineate a no-parking area to discourage blocking the right-ofway for emergency vehicles by public parking; to be supervised by the county engineer and District 1 Commissioner.

•approved a request from District 1 Commissioner Allen Armstrong for a $250 contribution to Hayden High School for the marching band; to be paid from contingent fund 002, which permits such donations for appropriate public purposes.

•approved and solicited relevant information from commissioners to formulate a county-wide herbicide bid.

•approved a speed limit recommendation of 20 mph from the county engineer for Liberty Road in District 2. Quorum and future meetings