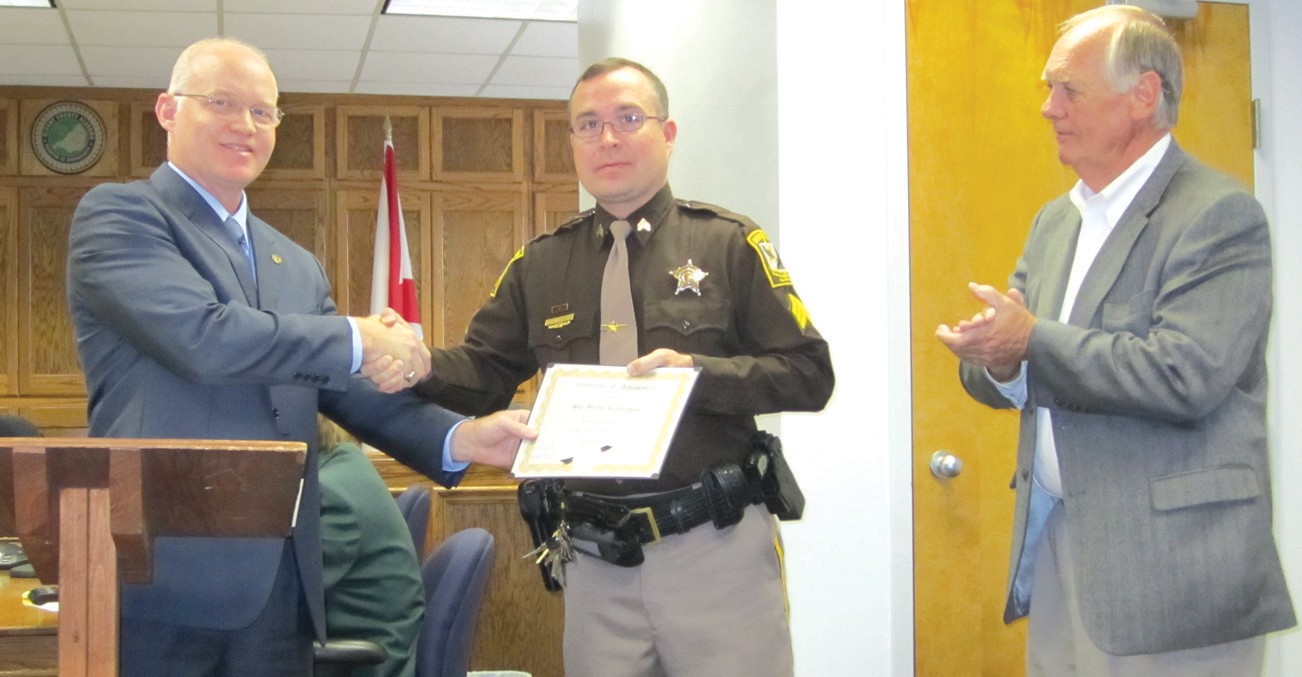 Sgt. Benny Richardson (center) receives Blount County’s first Officer of the Month award at the Blount County Commission business meeting Monday. Richardson, a resource officer at Locust Fork High School, was recognized for his work in ending the illegal sale of drugs to students at the high school. Commission Chairman David Standridge (left) made the presentation while Sheriff Loyd Arrington looked on.

The Blount County Commission Monday approved without discussion a motion by District 4 Commissioner Waymon Pitts to write a letter to the Alabama Department of Environmental Management (ADEM) opposing a 219-acre landfill proposed to lie within an area annexed last year into the city limits of County Line.

The motion followed a recommendation made at the commission work session on March 3 by Bob Shows, chairman of the Blount County Solid Waste Management Authority. The authority recommended that the commission “take whatever action it deems appropriate to stop this landfill,” arguing that it is not needed and will create negative impacts on the area.

The commission action followed a meeting last Thursday night at County Line town hall, attended by what one council member described as the “biggest crowd we’ve ever had.” The meeting was described as a public hearing on the town’s solid waste management plan.

It featured a presentation and question-and-answer period by Imre Szekelyhidi, the consultant who designed the landfill and represents Thornhill Marion Properties, who will manage it if it is subsequently approved and constructed.

Most of the standing-room-only crowd of some 50 people opposed the project. Shows addressed the group and pointed out that their ability to register their opposition to the project had been compromised by an inadequate notification process.

Nelson Brooke, Black Warrior Riverkeeper, contradicted Szekelyhidi’s contention that ADEM was an effective agency that would protect their interests adequately, and warned the participants to get organized and express their opposition effectively during the ADEM public comment period, which lasts only 30 days following public notice of the permit application.

A smaller group of citizens attended the commission meeting Monday and met with Pitts after the meeting to discuss the proposed landfill. Green reports on tax collection

Revenue Commissioner Chris Green reported as required by state law on the status of county tax collection activity. He said that as of yesterday’s date, $493,158 remained to be collected in outstanding taxes. That compares with almost $650,000 uncollected as of the same time last year.

He announced the date of the annual tax sale is May 11, the second Wednesday in May. He said taxpayers may pay their account in full by March 31 without further penalty and encouraged them to do so. He said about $50,000 remains to be paid in taxes on personal property, down from nearly $100,000 last year. May 13 proclaimed Relay for Life Day

The commission proclaimed April Paint Blount County Purple Month and May 13 as Relay for Life Day throughout the county. The proclamation calls attention to the anticancer campaign conducted during this period and encourages citizens to participate in it. The proclamation was made in memory of former District 2 Commissioner Robert Bullard, who succumbed to cancer last year. In other actions, the commission:

declared surplus District 4 assets #6860 (tractor) and #6861 (mower) and authorized the administrator to sell.

awarded bid for two right-wing rotary cutters for District 2 to Snead Ag in the amount of $11,047 each.

authorized administrator to negotiate and chairman to sign sales agreement for 1/2 acre off Old Hayden Road.

passed a resolution to post sign to read “NO PARKING 6 a.m Monday – 5 p.m. Friday” on White Water Drive in District 1 to accommodate need for school bus turn around.

approved claims and minutes for February.

postponed appointments for three positions on the area Mental Retardation and Developmental Disabilities board, awaiting recommendation from the director. Engineering matters