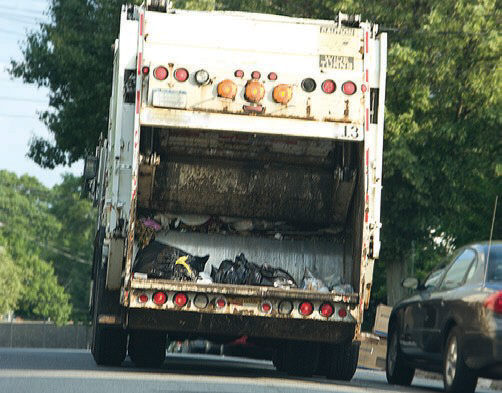 The Blount County Commission in its monthly business meeting Monday approved a 3-percent rate increase for trash pickup for customers of Allied Waste. The effective date of the increase is June 1. The company serves customers in districts 2, 3, and 4 of the county. The current rate is $15.78 per month. The new rate is $16.25 per month.

•Randyal Morton, Glenda Self, and Paul Allred to six-year terms on the Blount County Department of Human Resources board, at the recommendation of DHR director Marsha Parker;

•Don Graves and Norma Robertson to six-year terms on the Blount County Water Authority board;

•Randyal Morton to a six-year term on the Douglas Water Authority board;

•Debra Hicks to a six-year term on the Pine Bluff Water Authority board;

•Melvin Gilbert to a six-year term on the Remlap/ Pine Mountain Water Authority board.

The commission approved the 2009 annual tax levy at a rate of 26 mills per $100 of taxable property for citizens living in the county. Nine mills of the tax goes to the general fund to cover expenses of the county, five mills to the road and bridge fund, two mills to the Blount County Health Care Authority, and 10 mills toward support of city and county schools.

Citizens of Oneonta pay 25 mills per $100 of taxable property to the county, plus 13.5 mills to Oneonta to support the city school system.

In other actions, the commission

•awarded the bid for a crew cab truck for the Forestry Commission to Valley Ford with a bid of $24,767.50.

•awarded the bid for four or more Crown Vic- toria cars for the sheriff’s department to Valley Ford with a bid of $22,386 per vehicle.

•approved requesting bids for the purchase of one mid-size sports utility vehicle for the sheriff’s department, to be paid partly from the county general fund and partly from the sheriff’s pistol permit fund; speaking briefly at the meeting, Sheriff Loyd Arrington said the SUV is needed to replace a worn out Chevrolet Impala used by deputies to transport children and parents in connection with the abused children’s program. Arrington also thanked the commission for its support of the sheriff’s department, which he said is reflected in the budget.

•approved requesting bids for a vibratory compactor for District 4.

•declared two Blount County Transportation buses surplus and authorized their sale; the buses will not be replaced with new buses this year, although that has been the customary practice in the past.

•approved a family medical leave of absence for a county employee to recuperate from surgery; also agreed to poll other county employees for volunteers to donate a part of their sick and vacation time to the employee requesting leave.

•approved a resolution commending at his retirement O. H.”Buddy” Sharpless, for his 35 years of exemplary leadership and service to the Alabama County Commission Association.

District 3 Commissioner Tom Ryan spoke to acknowledge a major problem with the condition of Center Springs Road in District 4. “We’re going to all have to help out on that road,” he said. “All the garbage trucks from this side of the county take that road to go to the transfer station and they’re tearing it to pieces,” he said. Subsequent discussion focused on the fact that the road is too narrow, needs pipe replacement, and was not constructed for such heavy traffic when it was first paved.

Another problem mentioned by District 4 Commissioner Waymon Pitts and District 1 Commissioner David Cochran concerned the amount of trash that is blown off uncovered trucks along that route to the county transfer station. Commissioners discussed imposing a surcharge fee at the transfer station for trucks that are not tarped, to prevent trash from blowing out on the roadside.

Ryan also indicated his intention to rework three of the worst roads in his district this year if the budget permits: Jones Chapel Road, county highway 20, and Dailey’s Chapel Road near the Blount/Etowah line.

Portable basketball goals that are set up on public road rights-of-way also came up for discussion. Complaints from the public have highlighted the danger the goals create when they are left in the roadway. County attorney Tom Prickett said that once the commission has been informed of a location where a basketball goal has been reported as a danger, they face liability if an accident occurs at the site and a suit is filed. For that reason, they should act immediately once notified of a problem location, he said.

The solution discussed was to notify the owner to remove the goal from the roadway, informing him further that if it is not removed within a reasonable time such as 10 days, the county will remove it and transport it to the dump.

The commission renewed the bond for two subdivisions: Rock Springs Cove subdivision, developed by Raymond Seaver, at $20,000; and Indian Hills Sectors 1,2,and 3 developed by Frank Hollis, at $99,725. Pitts and county engineer Richard Spraggins discussed that the bonds are no longer adequate to cover the increase in road construction costs since they were originally imposed, but decided that in light of current economic conditions facing builders and developers not to increase the bond amount.

All members of county commission were present at the Feb. 9 meeting. The next commission work session is scheduled for Thursday, March 5 at 9 a.m., one week later than the normal second Monday meeting time.