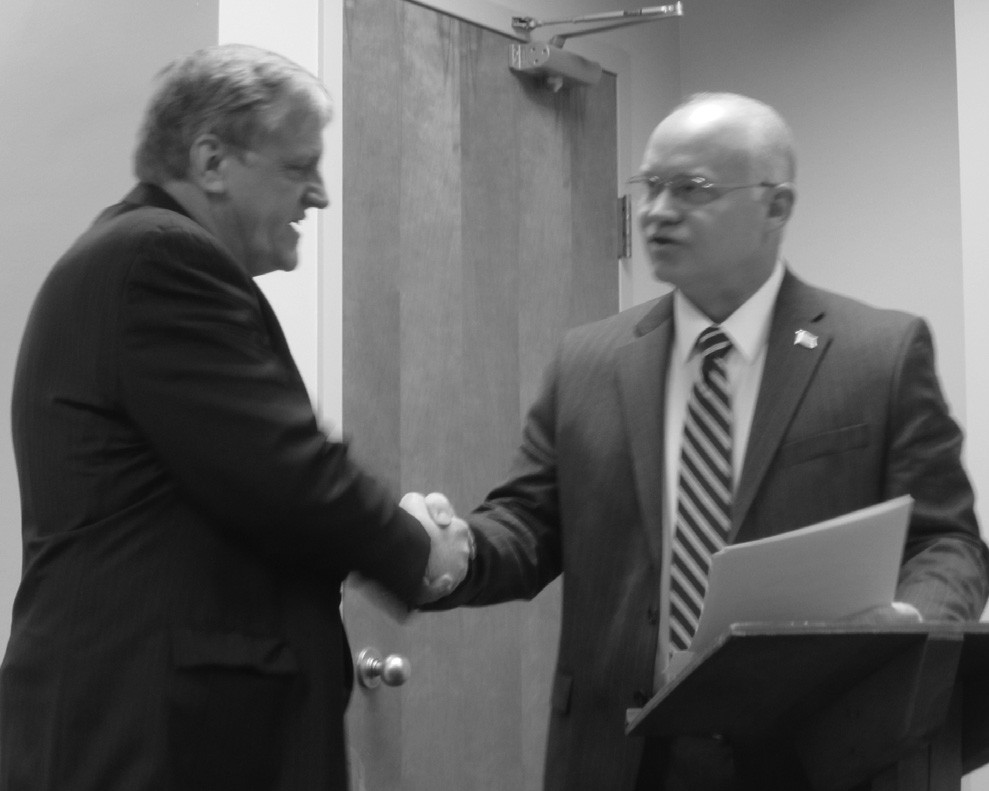 The Blount County Commission voted Monday to accept the one-sentence resignation from county engineer Richard Spraggins to Commission Chairman David Standridge announcing his intention to retire, effective Feb. 29. It also unanimously approved a resolution commending him for his “innumerable accomplishments as county engineer” and wishing him the best in his retirement. An audience of about 15 in the commission chamber stood and applauded as Spraggins received the award.

The commission then passed a motion authorizing the county administrator to begin the search for a replacement by advertising the county engineer job opening.

The commission approved the 2012 tax levy of 26 mills per $100 of taxable property for citizens living in the county. The approval is required annually in order for tax collection to proceed. Blount County Revenue Commissioner Chris Green said the this year’s tax levy is unchanged from last year.

For county residents, 9 mills of the tax goes to the general fund to cover expenses of county government, 5 mills to the road-andbridge fund, 10 mills toward support of city and county schools, and 2 mills to the Blount County Health Care Authority.

Citizens of Oneonta pay 25 mills per $100 taxable property to the county plus 13.5 mills to Oneonta to support the city school system.

The commission voted to authorize the commission chairman to sign a contract for aerial photography with Atlantic Group for $118,975, as recommended by Green. The commission had budgeted

The commission voted to change the meeting dates for both scheduled meetings in March to one week later than the regular schedule. Accordingly, the work session will be held at 9 a.m. on Thursday, March 15, and the business meeting will be held on Monday, March 19, at 9 a.m. The earlier dates occur too near the time of primary elections scheduled for March 13. Budget amendments

The commission approved nine budget amendments and authorized the administrator to make the necessary transfers.

•$17.15 from the sheriff ’s department’s discretionary fund to repay overspending from the taser grant fund.

•$3,475.29 to the maintenance department for insurance reimbursement received in connection with building damage last spring at the Royal Town Park.

•$600 to the emergency management agency for global information system data sold to a county supplier of research information.

•$16,185.45 to the District 4 111 fund for payment received from Taft Coal Sales for road repairs on Reid Schoolhouse Road and Lehigh Road.

“Citizens need to realize a couple of things about these coal companies and timber companies we deal with in Blount County. First of all, they need to realize that the commission has absolutely no control over what mining operations are authorized in the county. There’s a separate state agency in charge of that: the Alabama Surface Mining Commission. If people want to appeal to someone about mining permits, they should do so through their elected state senators and representatives.

“The commission does have control over our county roads. We have had excellent relationships lately with some of the coal companies regarding their use of county roads. This includes MCoal and Taft Coal who have stepped up to assume responsibility for needed road repairs as a result of their operations – unlike the timber company industry, which has not assumed responsibility for road damage and continues to give us a hard time.” In other actions, the commission:

•voted to accept a Homeland Security grant of $22,500 to establish a microwave connection between county radio towers at Palisades Park and Smoke Rise. The grant requires a $7,500 match from the county. The motion authorizes the administrator to purchase equipment from the state bid list and to initiate installation. According to county administrator Ralph Mitchell, the installation will make county communication independent of commercial carriers and improve the handling of official public service communication within the county.

•transferred a pressure washer from the landfill to the animal control agency.

•transferred “first pass” funds of $734.57 received from the state of Alabama for debris pickup and removal in the Blountsville area last spring to the town of Blountsville.

•appointed Phillip Cleveland, at the recommendation of District 3 Commission Andy Neill, to fill the unexpired term ending in March 2015 of Randyal Morton on the Douglas Water Authority board.

•appointed Douglas Lowe, at the recommendation of District 3 Commissioner Andy Neill, to fill the unexpired term of Randyl Morton on the Department of Human Resources (DHR) board.

•appointed Lester Hallman, at the recommendation of District 4 Commissioner Waymon Pitts, to the Pine Mountain Fire Department board. Engineering items:

•approved, at county engineer’s recommendation, an application permit to develop property lying in a floodplain area.

•decided on a procedure to follow in responding to a request to close a portion of Cannon Crossing Road, located in Smoke Rise subdivision sector 8 of District 1; approach is to hold a public hearing, though a date was not set; if no objections to the closing are made by adjoining landowners at the hearing, the commission will authorize a survey that will be required to legally describe the portion of the road to be closed.