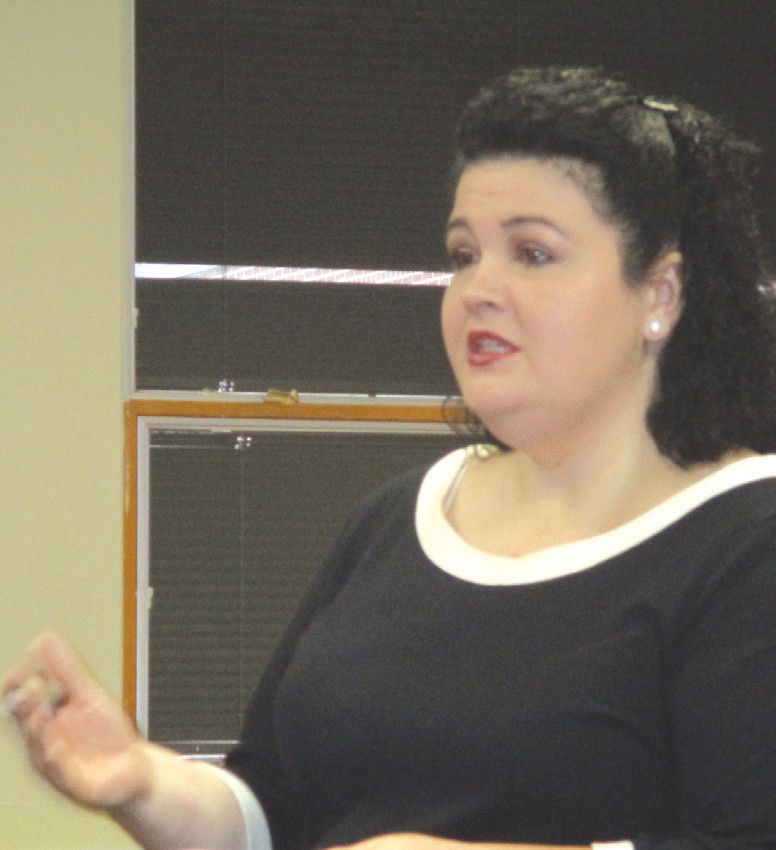 Blount County human resources manager Christa Reno spoke briefly to the commission Monday following her recent resignation. She resigned to go back to school to get a master’s degree in business administration. She isn’t going too far away, however. She has accepted a position in the Blount County Sheriff’s Department as a warrant clerk.

The Blount County Commission met Monday in a combination work session/ special business meeting. This article deals initially and at length with the major subject matter addressed by the commission in the work session – a 1-cent county-wide sales tax increase – and concludes with other aspects of the dual meeting.

The major portion of the meeting focused on a proposal – to be voted on and approved or rejected by citizens – to introduce a 1-cent increase in sales tax, to be collected county-wide. If the commission approves the proposal in its next business meeting on Dec. 14, the presentation made Monday will become the platform for a request to the Blount County legislative delegation to introduce legislation in the upcoming session providing for a referendum of the people in the next general election.

The presentation was based on District 3 Commissioner Dean Calvert’s personal attempt over the last year to come to grips with the financial crisis the county faces in trying to gain control over the rapid deterioration of county roads. That state of affairs is due to the failure of county revenues to keep pace with ballooning road costs over the 25 years since revenues were last deemed roughly adequate.

This report condenses in bullet form and closely follows the presentation on the proposal made in the work session.

Blount County is at a crossroads: it does not have the financial resources to maintain its roads and bridges, nor does it currently have a plan to do so. What follows is the second step of a recurring planning process. (The first step was ATRIP, which concludes in the summer of 2016, having paved 70 miles of strategic county arteries at a cost of $14.3 million.)

• $1.67 million per year is available for paving/maintenance/repair of roads and bridges.

• Each year, the two county school systems would split $1 million of the $3 million total, allocated on the basis of student population. Blount County Schools would receive approximately $850,000 annually for projects to be identified by the school board. Oneonta City schools would receive about $150,000 annually for projects to be determined by the school board.

• Beginning the third year (2019), 13 county municipalities would divide $500,000 annually , based on population. The approximate amounts, based on the 2010 census would be as follows.

• The county’s 22 volunteer fire departments would split the first $50,000 of the proceeds equally, an amount that would be used to replace critical fire and medical equipment and could contribute to lowering ISO ratings and homeowners’ insurance rates and keeping financially strapped departments viable.

• Bridge replacement would be routinely funded for the first time by diverting $533,000 in annual federal aid now used for road maintenance to scheduled bridge repair/replacement.

Objectives of the proposal

During the presentation, representatives of all three county institutions that would also receive support spoke in favor of the proposal.

Blount County Superintendent Rodney Green said that would be critical in the light of state and federal funding which has declined steadily since 2008. He pointed out that the two county school systems rank 132 and 133 out of 135 public systems in the state in expenditures per student. He said the money would be used to fund badly-needed projects such roof replacements, classrooms and other building additions, lunchrooms, and athletic facility renovations at virtually every school in the county system. He said if the proposal goes forward he would “ help you however I can,” adding his assurance that the school board, principals, and system itself would also add their support.

Two mayors of county municipalities – Jerry Jones of Cleveland and Joe Hughes of Locust Fork – also spoke in favor of the proposal. Hayden Mayor Larry Armstrong asked pointed questions about details of the proposal, but did not speak clearly against or in favor of it.

Joe Ray Dailey, long affiliated with county volunteer fire departments, said they would all need and appreciate increased funding, which would be critical to several of them to remain viable.

Blount County Commission Chairman Chris Green made the following statement about the proposal:

“We are at a crossroads that we have seen coming for quite a long time, and I am in full support of offering an option to the public for their consideration. The cost of doing nothing is far too great. We must as a county consider how to begin solving our road and bridge maintenance problems, how we can better provide quality education for our children, help our municipalities, and assist our volunteer fire departments. We cannot always wait for help from the state and federal government to meet our local needs. It’s time for our citizens to be educated on our local problems and be given an opportunity to help solve them.”

Calvert, who initiated the presentation, spoke about his reasons for doing so. “I want to move Blount County forward,” he said. “That’s the title of the presentation. And it’s what I ran on when I ran for this job. I ran on the basis of doing the best I can for the county. I didn’t run on not raising taxes. I don’t want more taxes. Nobody does. And I want to be clear about this: I’m not raising taxes. I’m giving the people an option – an opportunity to decide whether they want to pay a little more in order to get more services – better roads, better schools, better communities – or not. I’m giving them a chance to evaluate the option, decide what they want, and vote on it. This presentation represents my best effort to present that option. It’s taken me this long to come up with this option that benefits the whole county. I’ll run on this when the time comes. It may get me whupped. If it does, I’d rather leave knowing I’ve done all I could humanly do, rather than leave here and go back to working construction, knowing I could have done more.”

In the business meeting immediately preceding the revenue proposal, the commission discussed the need to hire a payroll clerk to immediately take over payroll functions currently being handled by human resources manager Christa Reno, who is resigning.

Discussion centered around recommendations by Reno, seconded and augmented by county administrator Zac Marsh, to split the job into two different positions: a clerical job to handle payroll matters proper, and a managerial-level human resources position to handle what has become a de facto human resources department during Reno’s tenure. Commissioners decided during the course of discussion to fill the clerical position quickly “so we can all continue to get paid,” Marsh joked, and to proceed more deliberately to find a properly-qualified person to handle complex issues such as tax and federal compliance matters involved in the human resources managerial job. Reno said she will be available nights and weekends to help provide continuity during the orientation to the job of both new hires.

The commission voted unanimously to add the clerical job as a pay grade 7 position and to fill it as soon as possible. Then the special business meeting was adjourned, and the work session to discuss issues related to possible legislation began.

• the prospect of converting the county administration from the district system to the unit system, a change that would significantly affect the organization administration of the county road maintenance/improvement and responsibilities and terms of employment of county commissioners.

• the need for increased local revenue to address roads, bridges, and other needs of county governance.

• the need to purchase a new vehicle for the Blount County Coroner’s Office (inexplicable, but true – by law, it requires enabling legislation by the Legislaure).

The issue concerning increased local revenues was discussed exhaustively. The other two were not discussed.