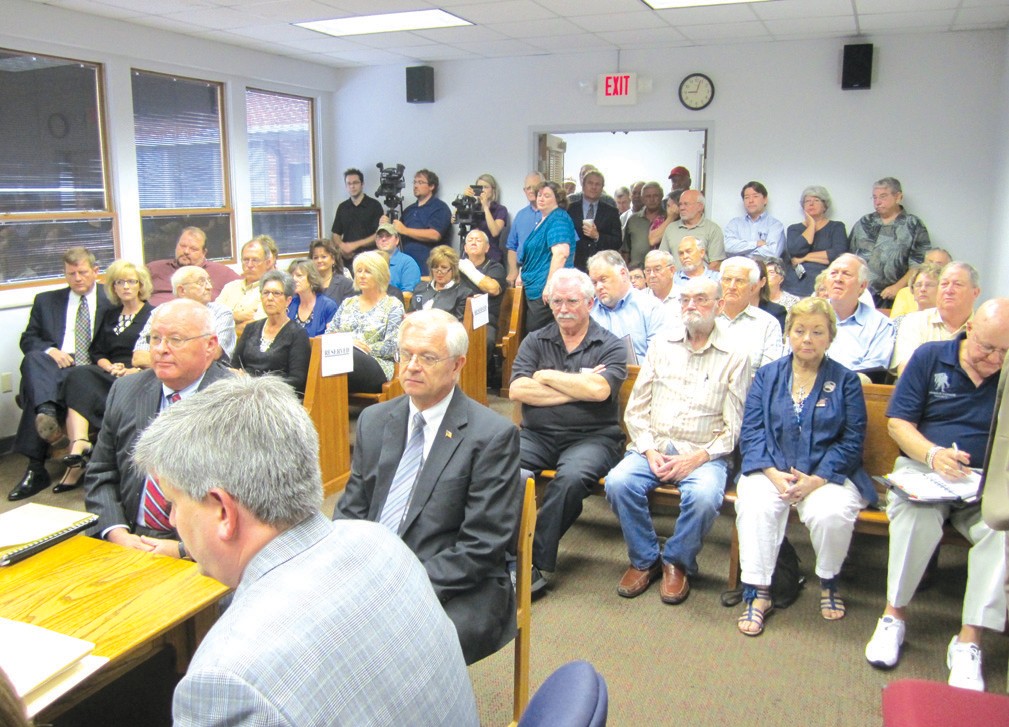 The setting for the Sept. 6 hearing concerning the termination of county administrator Ralph Mitchell. Not shown are the four county commissioners and Commission Chairman Chris Green, seated at the front of the commission boardroom.

In a packed commission boardroom at the courthouse last Thursday morning, the Blount County Commission upheld its vote of Aug. 21 to terminate the employment of county administrator Ralph Q. Mitchell, following a roughly 90-minute session.

Asked about his opposing vote, Armstrong said, “I didn’t see enough evidence to justify firing. It’s important to observe proper protocol on a proceeding like this, and that wasn’t done, in my opinion.”

The hearing concluded a month of tension among courthouse employees, a dozen of whom were subpoenaed by Mitchell’s attorney Greg Reid to appear at the hearing, presumably to be questioned on information they had provided to a special investigator brought in to inquire into the circumstances surrounding Mitchell’s being asked on July 31 to absent himself from the courthouse until further notice.

In the first important public act of his tenure, new Probate Judge and Commission Chairman Chris Green, chairing the hearing, ruled the subpoenas were to be set aside as not being appropriate or customary for the informal hearing as normally practiced under the Personnel Policies and Procedures of Blount County, the county’s official manual of employee management. Therefore, the 14 people subpoenaed were not called to testify, and were given the opportunity to leave the chamber if they wished. None left.

Green himself, sworn in only two days before the hearing, was officially obliged to chair the meeting as a duty of the office he assumed. Former Probate Judge and Commission Chairman David Standridge, whose job would normally have resulted in his chairing the hearing, resigned his office effective four days before the hearing. He also did not preside over the special commission meeting called on Aug. 21– citing a conflict with his probate court duties – at which Mitchell’s employment was terminated by vote of the commission, chaired by vice chairman Waymon Pitts. Standridge broke the commission’s deadlocked 2 – 2 vote on April 28, 2009, by voting to hire Mitchell as county administrator.

The events of the 37 days between July 31 and Sept. 6 – the period coinciding with the beginning and culmination of the Mitchell inquiry – created an atmosphere around the courthouse that ranged from mild tension to not-so-mild paranoia, and set the interests and allegiances of both citizens and county employees into disarray, if not opposition. Two groups – one representing military veterans and another West Blount citizens – were particularly disaffected with the process and outcome.

The hearing began with an opening statement by attorney Greg Reid, in which he described the occasions on which he had requested the commission provide him with a detailed specification of the charges against Mitchell, providing names of accusers, as well as dates and substance or specific details of any alleged mishandling of work assignments or misconduct in his dealings. Reid said no such details had been provided other than the generalities included in the notification of termination. He said no formal complaints had been noted in the record, and no prior notices or warnings had been given to Mitchell about any alleged misconduct.

Mitchell himself was questioned at length by three of the four commissioners about his handling of about a dozen specific incidents or situations involving either misconduct or mishandling of particular work assignments.

Questions generally were lacking in sufficient context for the uninformed listener to judge the magnitude or, in some case, the exact nature of the violation being questioned. In several questions concerning possible misconduct, Mitchell generally deflected blame from himself with answers portraying his conduct as either innocuous or misunderstood.

Questions had to do with several matters, some related to job performance, others to behavior toward others.

•Whether, and if so why, Mitchell instructed employees not to “go around” him to get answers to work problems they experienced.

•Whether an attorney of the Association of County Commisions of Alabama had or had not ruled it permissible to use county equipment on private property when requested to do so on an emergency basis by another governmental entity and whether Mitchell had misrepresented the facts to the commission.

•Whether Mitchell improperly pressured a direct reporting employee to persuade her husband to cast a vote on an autonomous board of which he is a member in favor of hiring a friend of Mitchell’s.

•Questions concerning the propriety of joking with female employees about “pole dancing” and wearing bikinis.

•How, when, and by what authority arrangements were made to wire the closed circuit signal from courthouse security cameras to provide monitoring capability to Mitchell’s office computer, and whether he used them to “check on” employees.

•Questions on Mitchell’s handling of a spreadsheet related to the commission’s recent policy on employee retirements.

•Questions on the long-delayed installation and trouble-shooting of computers ordered on a grant for Memorial Museum and other possible irregularities in that process.

•Possible insubordination after being ordered by commissioners not to talk to another employee about a volatile problem.

State of the body politic

Many citizens voiced concern and some vehement dissatisfaction with the entire affair, with several saying, for different reasons and from differing perspectives, and using stronger language generally that “it hasn’t been Blount County’s finest hour.”

It’s not over yet

Mitchell, as a merit employee, is entitled to appeal the decision of the commission regarding his termination to the Blount County Merit Board for a ruling on the merits of the action taken. He is expected to do so immediately, according to his attorney.

The merit board, operating under normal rules of evidence, will set a date to conduct a formal review that could sustain the commission’s vote to fire Mitchell, or overrule it and return him to the job with full pay. It could also decide to demote him or return him to his previous job with disciplinary constraints. The hearing will be held in the small courtroom at the courthouse. It will be open or closed to the public, according to Mitchell’s request.