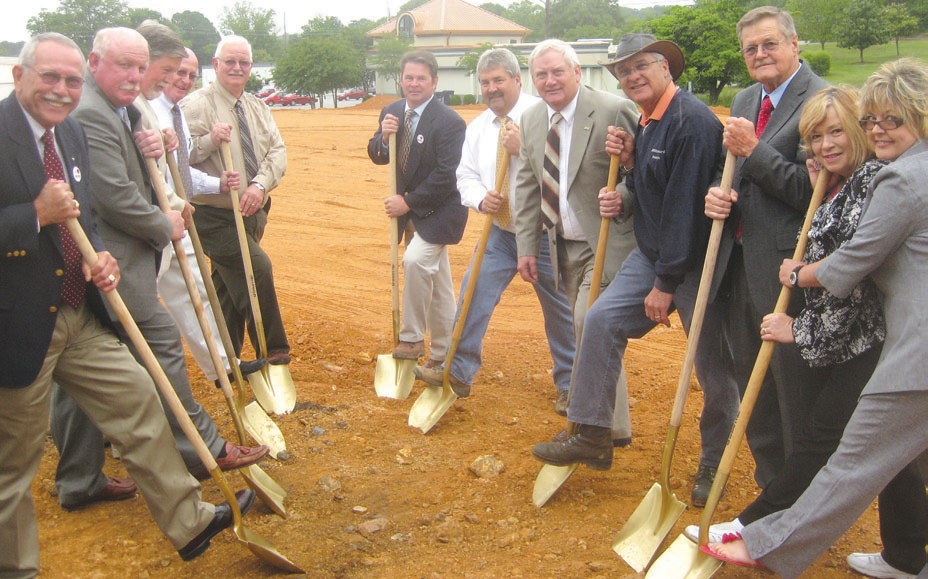 The Blount County Commission voted unanimously at its monthly business meeting Monday to relinquish the lease on office space at Superior Bank in Oneonta, used until recently as headquarters for the Blount County Industrial Development Board. The board was dismantled on March 19 following the resignation of its board chairman and two remaining board members.


Concurrently, the commission voted to return the remaining $23,879 of a $100,000 grant from the Alabama Department of Economic and Community Affairs. The grant was used to pay the salary of the board’s director, Cynthia Wingo. The remaining portion of the ADECA grant was part of approximately $157,000 in cash assets transferred back to the commission at the time the industrial development board was discontinued.

Commission Chairman David Standridge said at the time the board was dissolved that certain activities and functions of the industrial development board would be assumed by the Blount County – Oneonta Chamber of Commerce.

The commission also awarded two bids related to full-depth-reclamation roadbed preparation. The method involves mixing cement with roadbed base materials in order to create a more durable foundation for the paving medium – tar and gravel or asphalt – that is then applied as the surface layer. The process results in a road surface that lasts longer, bears heavy loads better, and has fewer potholes and related problems than the standard method of roadbed preparation.

The cement bid for the process was awarded to Lehigh Cement of Birmingham, with a bid of $89 per ton, which was $19-per-ton less than the next closest bid.

The bid for contracting the full-depthreclamation process, including cement, was awarded to Kimes and Stone Construction of Booneville, Miss., with a bid for asphalt roads of $3.60 per square yard, $3.73 per square yard, and $3.92 per square yard for 5-inch, 6-inch, and 7- 8-inch depths respectively. The bid was about $2 per square yard less than the next closest bid for all three depths. Bids for tar and gravel roads were about 17 percent less than for asphalt. At the price bid, the cost for preparing one mile of roadway is between $35,640 and $47,040 depending on type of surface material used (asphalt or tar and gravel) and the reclamation depth selected.

The commission approved the following purchases:

•$85,105 bid to Snead Ag for a wheeled excavator for District 3, financing to be arranged and signed for by the commission chairman.

•$22,500 bid to Thompson Tractor for a road broom, to be split evenly and paid from District 3 and 4 budgets.

•$9600 for a hydraulic hammer for District 1, to be paid from that district’s budget.

•$8099 in the form of a budget amendment to allow for the commission’s share of the cost of the license inspector’s vehicle.

•approved allocating the county portion of funds from the sale of two county transportation buses to the Hope House; the county portion is 20 percent of the proceeds, with proceeds estimated at $9000 to $12,000 for the two vehicles.

•appointed Jeff Hallmark to fill the unexpired term of Allen Stoffregen on the Agribusiness Board of Directors; the term expires in September, 2012.

•reappointed all four current district representatives to the chamber of commerce board of directors: District 1, Carter Brand; District 2, Jane Wright; District 3, Kelly Cochran; and District 4, Becky McMillian; length of all terms is one year.

•postponed action on a request from Kenneth and Margaret Bagwell for a variance from subdivision regulations on frontage and setback requirements for four mobile homes in District 2; matter will be taken up when district commissioner Robert Bullard is present.

•tabled discussion of revised policy on driveway pipes to allow further time for study and consideration.

A delegation of citizens headed by spokesman William Smith asked the commission for help in working Wood Road, a dirt road in District 2. They said the road has become almost impassable because ditches have not been maintained properly and the road has not been graded and maintained at all recently.

District 2 Commissioner Robert Bullard replied that the road hasn’t been worked because fences built onto the county right of way by another landowner make the road too narrow to admit road equipment. Bullard said one or more owners’ failure to provide driveway culverts caused rainwater to overflow ditches and drain into the road itself cause washing and gullies. Bullard said he couldn’t work the road until both of those matters are resolved.

Mrs. Smith told the commission that an elderly lady living on the road could at some time need emergency medical attention, and that an ambulance might be unable to reach the home because of the deteriorated condition of the road.

Citizens left in anger after failing to get reassurance that the road would be worked. William Smith said as he left the room that he would buy a driveway pipe and have it lying on the road the same afternoon for the county crew to install. After their departure, commissioners continued to discuss the matter. It appears the commission wil look into ways to remove the fence and work the road.

Representing Friends of Rickwood Caverns, Chester Thomas requested release of $10,000 in funds allocated in the fiscal year 2010 budget to support improvement projects at Rickwood Caverns. Thomas said the money was to be used to install a septic tank, heating and air conditioning unit, and a roof for a rustic rental cabin being built by the Friends at the state park. He said work on the septic tank could begin within 10 days to two weeks.

Commission Chairman Standridge told Thomas to make the request official by putting it in writing and having it signed by an officer of the organization. He said the purpose for which the money is requested meets the requirements for a supporting a specific project when the money was budgeted.

County attorney Jeff Sherrer reported he believes the commission has the authority to impose and enforce traffic weight limits in subdivisions on a “road by road basis.” The question was posed in a prior commission meeting in connection with a complaint by a subdivision resident that a trucking company with multiple large vehicles was operating from another residence within the subdivision, destroying the roads in the process.

Pitts reported that he had spent $178,000 repairing damage in his districit resulting from an extended period of record freezing temperatures in January. Pitts said he would request emergency budget relief from the commission contingency fund later this summer.

The next commission work session is Thursday, June 10, at 9 a.m. The next business meeting is Monday, June 14, at 9 a.m. Both will be held in the commission chamber in the courthouse in Oneonta.