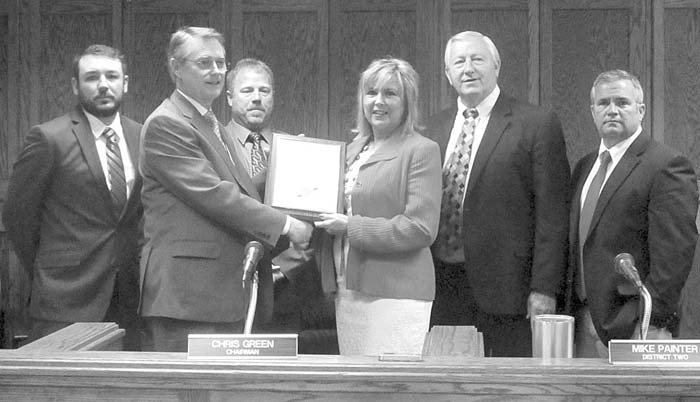 Retiring: Teresa Painter Deweese receives framed resolution for 19 years outstanding service with the county, the last eight in the commission office. Quotable: Mike Painter (her brother) – ‘I told her when I took office that one of her new job requirements was to call her brother ‘boss’. ‘That’s why I’m retiring,’ Teresa called out resoundingly from the next-to-back row.

The Blount County Commission in its monthly business meeting Monday voted 3-0 with one abstention to appropriate $1 million toward construction of a building dedicated primarily to Wallace State Community College to use as its Oneonta academic campus center. 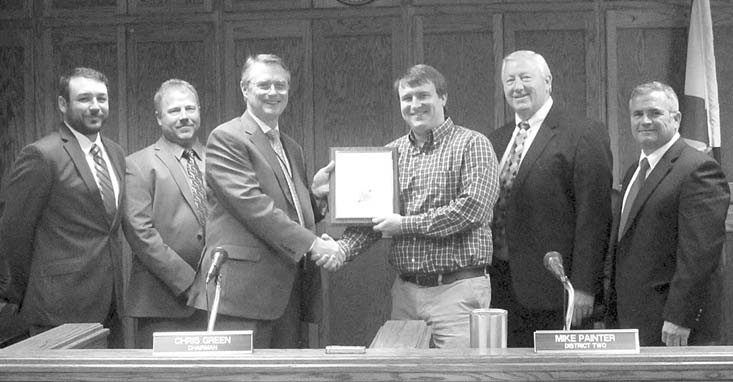 Resigning: Zac Marsh receives framed resolution for four years’ hazardous duty as county administrator. Quotable: Commissioner Dean Calvert, after praising Marsh at length for his near-legendary super-savvy computer and mathematical analysis skills concluded with this gem – ‘That’s where I go to find out my ideas ain’t no good!’

The appropriation, according to the motion, consists of a $500,000 lump sum, followed by annual increments of $100,000 for five years. The entire amount is to be taken, by the wording of the motion, from the county general fund reserve account which has been accumulated over several years, to be used for exceptional opportunities or emergencies such as disaster relief. Commission Chairman Chris Green said that the appropriation “has nothing to do with” the recently passed 1-cent sales tax increase, which is allocated entirely to county road improvements under the Moving Blount County Forward plan.

Abstaining was District 2 Commissioner Mike Painter, who said that although he supports the Wallace State project and its benefit to the county, he has struggled to decide how to vote on the matter. He said his concern is with the county’s overall budget situation relative to the need for increased funding for road improvement. He has previously voiced this concern with reference both to road funding for his district and throughout the county. For that reason, “I will abstain from voting,” he said.

The roughly 20,000-square-foot, $3.5 million building will be located in front of the Blount County Senior Center on First Avenue downtown and is scheduled for completion by late 2018. The existing Wallace State facility on Ala 75 will be dedicated mainly to career technical and workforce-related training upon completion of the new building.

Response to the Wallace State presence has been considerably greater than predicted by preliminary estimates of student enrollment, according to Oneonta Ccity manager Ed Lowe, who told the commission in its work session that student enrollment for Wallace’s first academic year here was 457, compared to initial projections of 100.

Annual economic impact on the county economy was estimated by Alabama Power to be more than $4 million, based on 100 students in the initial year of operation. Economic Development Council executive director Don Mitchell said the Wallace State presence will be a key element in attracting new businesses to Blount County.

The commission voted unanimously to participate in the Back to School Sales Tax Holiday during the period 12:01 a.m. Friday, July 21– midnight Sunday, July 23, this year. State, county, and city sales tax on many items of clothing and school supplies will be waived during that period.

The commission voted unanimously to authorize the commission chairman to execute agreements with CDG Engineering to provide design and engineering services for the U. S. 231 Bridge Scenic Overlook TAP (Transportation Alternatives Program) grant project at the Locust Fork River near Cleveland.

The commission authorized an agreement with Snead in District 2 for the county to reclaim and compact Lee Ridge Road, requiring Snead to provide compaction testing, to pave the road following the county’s fulfilling its part of the agreement, and to accept the road as a municipal street.

The commission passed a package of four measures, three of them routinely required on an annual basis, to maintain operation of the Blount County Transportation Program.

In other actions, the commission

• appropriated $40,000 to District 1 for road striping as a public safety measure.

• appropriated $3,500 for labor at the Blount County-Oneonta Agri-Business Center to build new storage area to accommodate materials needed for events.

• authorized Lathan & Associates to request bids for renovation and repaving of the courthouse back parking lot, and authorized the chairman to sign necessary documents.

• authorized the chairman to execute agreements with municipalities for road work performed within their city limits, following approval by the commissioner of each district.

Acting engineer Dustin Stewart was absent, due to his attending an engineering conference. The commission took the following actions in his absence:

• passed two routine resolutions required by ALDOT in connection with Blount County state road resurfacing projects – one affecting Ala 75 north to County Road 39 and another affecting I-65 in western Blount County.

• approved $46,700 bid from Tomahawk Construction for a bridge project on Double Pond Road (formerly Acton Bend Circle) in District 1 and authorized chairman to execute contracts upon approval of the commissioner.

• approved $163,200 bid from Blount Construction Company to perform full-depth reclamation on Airport Road in District 3, authorizing chairman to execute contracts upon approval of the commissioner.

The commission approved convening in executive session to discuss economic development opportunities and to get an update on pending litigation, according to the enabling letter filed by county attorneys. No action was taken upon their return to regular session.