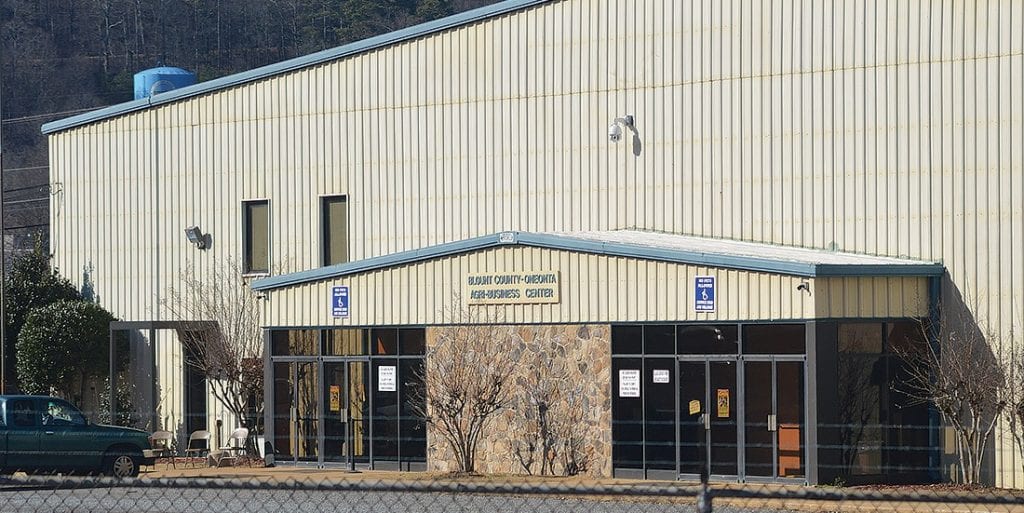 Promising a brief executive session with no further official action likely, the quorum of three Blount County commissioners and the chairman met with county attorneys, returned an hour later, and passed two blockbuster motions: the first authorizing the chairman to negotiate with the City of Oneonta (co-owner) to sell the current Agri-Business Center property, and the second authorizing him to begin discussions with a landowner or landowners to relocate an “Agriculture/Economic Center” in another area of the county. The action capped an unusually brief commission meeting.

• updated status of commission-owned investment property near Rainbow Crossing, repeating information from the April 22 meeting that surveying into three parcels has been completed, and an offer is expected from a prospective buyer; buyers mentioned in the last commission meeting included Lee Industries and another un-named local prospect.

• adopted a resolution providing an exemption from county sales and use taxes in connection with the back-to-school sales tax holiday for school clothing and supplies, set to begin Friday, July 17, and end at midnight on Sunday, July 19.

• approved the appointment of Tamara Alldredge to the Jefferson/Blount/St. Clair (JBS) Mental Health Authority board.

• heard progress report on work at the Hayden Courthouse Annex to provide renovations for Americans with Disabilities Act (ADA), security, and COVID-19 needs and compliance; renovations will provide more space for employees and more efficient work layouts. Work begins next week and is set to be complete by the last week in July. Engineering matters

County engineer Dustin Stewart reported that Chamblee Road Bridge, the oldest remaining truss bridge in the county, will be permanently closed. He said the Alabama Department of Transportation (ALDOT) had notified him of the need for closure at their last inspection. The bridge is barricaded. Quorum and future meetings

The next commission work session is set for Thursday, June 4, at 9 a.m.

The next commission business meeting is set for Monday, June 8, at 9 a.m.

Both will be in the commission boardroom at the courthouse in Oneonta.