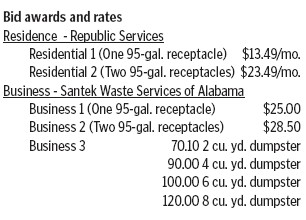 (Ed. note – Report of actions of the Feb. 11 commission meeting – other than the unit system referendum vote. See separate story on page A11 for that report.)

The Blount County Commission conducted a public hearing on granting an exclusive franchise or franchises for countywide garage pickup services at its business meeting Monday. The contract is to be for three years, renewable in one-year increments for three more years, with provision for a price increase of up to five percent at the end of the initial three-year period, with the actual amount of increase tied to the Consumer Price Index. The franchise applies to areas in the county outside of municipalities that have existing garbage pickup arrangements. The franchisee has an exclusive contract, but use of the county franchisee by the public is not mandatory if they wish to burn or dispose of their own garbage. No objections were recorded in the hearing and only a few questions. One question concerned use of personal pickup containers. Answer: According to the contract, subscribers must use the free container provided by the pickup service (because of the uniformity requirement for automated loading.) See chart above right.

In other business, the commission:

• authorized county administrator to advertise for an HVAC-certified technician and a journeyman electrician, concurrently approving the job descriptions for both positions.

• appropriated $7,500 for part-time labor and other miscellaneous expenses for the Agri-Business Center.

• approved transferring ownership of countywide heavy equipment storage barn to District 4 for use at District 4 shop.

• surplused 2018 Kenworth tandem truck and 2017 Ford F150 and authorized their sale by best means possible, with proceeds to be applied toward replacement tandem truck.

• approved memorandum of understanding with Cleveland regarding their acceptance of Marshall County Gas utility line on the bridge at the Locust Fork River Scenic Overlook and authorized the chairman to execute.

• approved request from Blount County Sports Hall of Fame to sponsor table for eight for $200 at March 7 banquet.

• approved agreement with St. Clair County for annual cost of $25,000 to reserve a juvenile detention bed.

• approved two items involving use of courthouse steps/lawn for separate but similar events: National Day of Prayer observance coordinated by First Baptist Church at noon on Thursday, May 2; and Bible-Reading Marathon from Thursday, May 2, through Sunday, May 5.

• reappointed Tim Fry as commission representative to a four-year term on the Blount County Merit Board.

County Engineer Dustin Stewart reported that the Blount County scenic overlook project at the old U. S. 231 bridge site north of Cleveland is complete with final paving done last week. It is expected to cost about $408,000 when all costs are in, representing an underrun of more than $28,000. Commissioners decided in informal discussion to name the site Kings Bend Overlook Park for signage purposes.

Stewart also reported on the Miller Road Bridge replacement project. It is not nearing completion, but the abutments and decking work are complete. Total cost is estimated at just under $600,000, with an estimated underrun of about $60,000. The bridge should be complete later this spring, depending on the weather.

The commission voted to go into executive session to discuss security arrangements and related matters, returning in about 30 minutes to adjourn without further action.

All four county commissioners and the commission chairman were present at the business meeting.

The next commission work session is at 9 a.m. on Thursday, March 14.

The next commission business meeting is at 9 a.m. on Monday, March 18.

Both are in the commission boardroom at the courthouse in Oneonta.