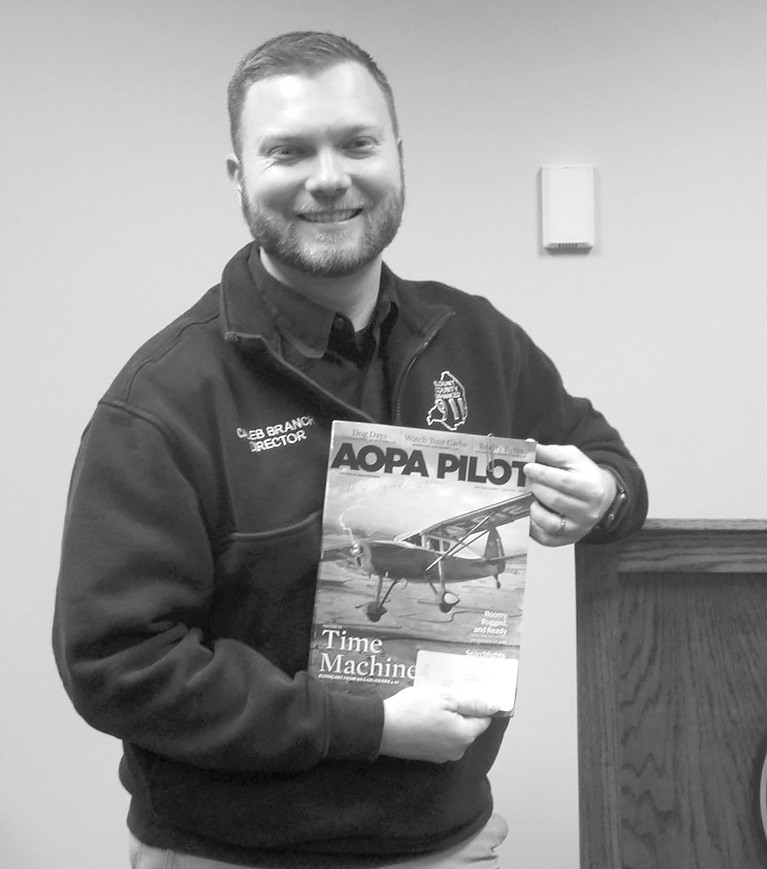 911 center director Caleb Branch holds up the magazine containing the feature article recognizing Branch for his leadership in introducing a drone for first-responder-related uses in the county – for which he was presented with a tongue-in-cheek UMA (‘You ain’t in Mayberry, anymore’) award by former airline pilot and unofficial citizen ombudsman Joe Ray Dailey. The drone, which several county law enforcement agencies pitched in to purchase, has already been used numerous times for eye-in-the-sky assignments such as weather assessment, wildfire monitoring, locating an airplane crash site, and searching for missing persons. 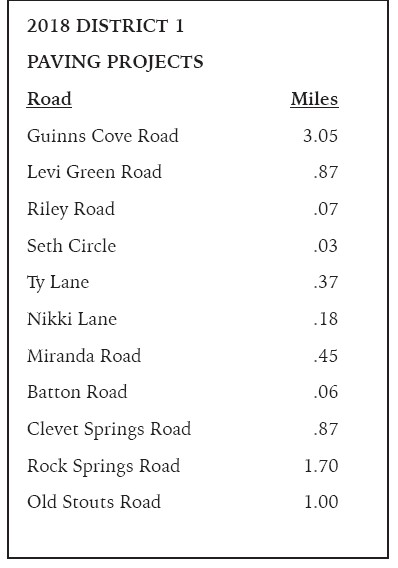 One of the items affects both citizens and employees in the near term. Another affects employees only.

(1) The commission voted to prohibit smoking or other use of tobacco products by employees (cigarettes, cigars, electronic smoking devices, and smokeless tobacco) on all county property – inside and outside the building – and in all county vehicles. Designating smoking areas where smoking is permitted was explicitly ruled out in discussion, although not addressed in the motion. Likewise, all such use of tobacco products by the general public on county property – inside and outside the building – is prohibited. The effective date of the prohibition is May 1 upcoming.

(2) After going into executive session to discuss the matter at length, the commission voted to implement three new regulations affecting employee access to the courthouse. They are to be added to the employee handbook.

• A current list of all employees with courthouse access will be kept by the human resources manager and buildings superintendent. It will include approved county and state employees, as determined by the county administrator, and members of the Office of Public Examiners.

• Upon termination of employment, all county property must be turned in, including keys, name badge, key fob, cell phones, and employee handbook. Final compensation may be withheld until the items are turned in. All access to the building will be immediately terminated.

• Failure to comply will result in disciplinary action which could result in reduced access or termination.

The third and fourth items concern the interior renovation of the courthouse.

(3) The commission voted to authorize the chairman to initiate an environmental study for the courthouse with ERG Environmental Company at a cost of $8,490. The study will lay the groundwork for extensive replacement and upgrading of courthouse infrastructure systems.

(4) The commission voted to authorize Lathan Associates, architects/consulting engineers for the courthouse interior renovation project, to request bids for phase 1 of the project, including installation of new building electrical service and new water and wastewater services and facilities in the building. The project, including subsequent phases, is expected to require multiple years to complete. Other matters

District 1 Commissioner Allen Armstrong submitted his list of 2018 paving projects for approval. The commission accepted the projects as submitted. The plan includes paving 11 local roads, a total of 8.65 miles, at a cost of $337,656. See accompanying chart for details.

The commission approved a one-year extension to the existing solid waste contract with Republic Services, allowing an increase of 31 cents a month, to bring the monthly service total to $15.63 per month for local residential trash pickup. The company will be notified there will be no further contract extensions until a formal bid process is conducted.

• approved a resolution to participate in the “Back to School Sales Tax Holiday” beginning at 12:01 a.m., July 20, 2018, until midnight, July 22, 2018, by exempting county sales tax on certain school supplies, clothing, and other school-related purchases during that period.

• authorized the chairman to write a letter to support congressional funding for the U. S. Army Corps of Engineers Wastewater and Drinking Water Fund. The letter is related to a competitive grant application to be made for a planned water/wastewater project in West Blount County by the Blount County Water Authority. Congress must appropriate the money before the Corps can dispense it.

• approved amending the jail budget to move $5,000 from the capital improvement account to the jail general maintenance account, to allow for miscellaneous maintenance-related expenditures as necessary.

• authorized agreement between Blount County and Jimmy Childers for purchase of chert at a pit on County Road 26 near Blountsville.

• authorized chairman to execute franchise agreement with AT&T for provision of telephone internet service in the western and southern portions of the county.

• approved resolution to amend the articles of incorporation of the Water and Fire Protection Authority of Douglas to change its name to Douglas Water Authority.

• approved purchase for $15,000 for concrete panels used to form and build bridge abutments; panels durable for up to 70 uses.

• authorized reimbursement to District 2 from countywide funds (fund 100) for expenditures related to cross pipe repairs during the ATRIP paving project on County Road 26.

• authorized replacement of Jones Chapel Loop Bridge in District 3 by District 3 crew at estimated cost of $150,000; one-half of cost to be from District 3 budget, one-half from countywide fund 111, or other appropriate source, if 111 is depleted, as determined by administrator.

• authorized payment of $33,475 at Medicaid rate by county, primarily to St. Vincent’s Blount, where most services were provided, as payment in full of billing rendered for inmate emergency health care in 2017. Other providers were included in provision of services, which totaled $148,000, and have been the subject of negotiation.

• approved repairs to old U. S. 231 bridge at Cleveland prior to beginning Scenic Overlook project, including addition of sealer resurface to bridge deck to prevent deterioration – as directed by county engineer, with assistance of commissioners.

Present at the meeting were all commissioners: Washburn, Calvert, Painter, and Armstrong; Chairman Green; and the full complement of legal, engineering, and administrative staff.

The next scheduled work session is set for Thursday, May 10, at 9 a.m. The next business meeting is set for Monday, May 14, at 9 a.m. Both meetings are in the commission boardroom at the courthouse in Oneonta.