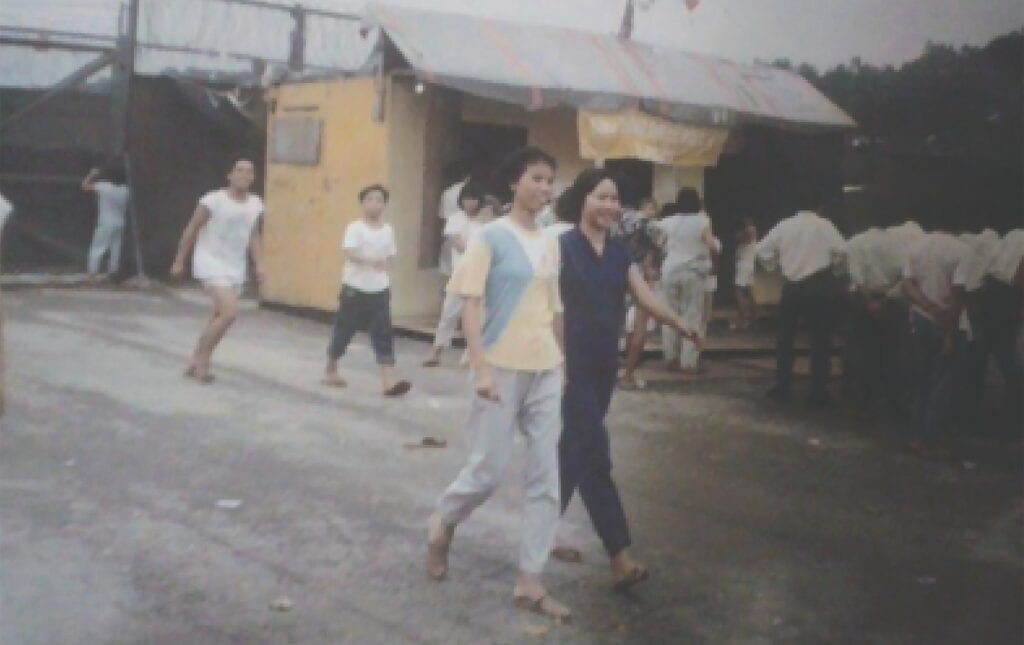 Thuha Le (yellow shirt) and friend stroll through Seekong Camp in Hong Kong in 1991. Behind the girls is a Buddhist temple built by refugees from scrap lumber. Inset: Le and son Nam. -photos courtesy of Thuha Le

I have often heard the phrase, “What doesn’t kill you makes you stronger.” Indeed there is some truth to that phrase, but for Oneonta business owner Thuha Le, it definitely signifies the struggles she has faced as she focused on becoming an American citizen.

As the youngest of 10 children, Le was born in Vietnam in 1971 as the Vietnam War continued. Her life as a child left many scars imbedded deeply within her, including witnessing her brother, who had served in the military there, being forced into prison with all of the others who had served their country just because they had been part of the military. She witnessed a lot of injustice and decided early on that she would do whatever it took to make sure her life would be much better.

We sometimes say, “Whatever it takes,” but just how far will we go to accomplish our mission? Le was determined.

And so it began in 1991 for Le. At the young age of 20, she decided to begin her journey for a better life. In the wee hours of the morning, Le, along with four nieces, ages 7, 10, and two 11-year-olds, traveled to the shore and boarded a small boat in a quest to reach Hong Kong. She was leaving a family she loved dearly and all of her possessions.

Because the boat was extremely over capacity with 78 people on board, it would be a very dangerous journey, but one that Le had to take. Due to being overcrowded, Le and her nieces had to sit straight up, shoulder-to-shoulder, for four days and nights. The only items she had with her were a little bottle of water and instant noodles that she rationed out between them during the long and dangerous trip. Bathroom facilities were non-existent and that made the trip even more unbearable. But, Le was determined.

Finally, the boat reached the shores of Hong Kong. Police officers came aboard the unchartered vessel and took everyone ashore. Passengers’ hair was cut very short and sprayed with a chemical to kill any bugs. They were then issued prison uniforms. After being taken to a camp, the now refugees would live in military tents and share a piece of wood with another person to sleep on. Each person was issued one cup, one bowl, one spoon, and one blanket.

For the next two years, Le and companions lived in three refugee camps before being transferred to a camp where they would have a little more freedom. The newest camp resembled a warehouse. They now had a more structured and safer building to live in, but all refugees were awaiting a third country to take them in.

While there, the refugees were required to be out of the camp by 9 a.m. and back by 9 p.m. Le would walk around outside the camp, as well as wait in the long lines to get her portion of rice and other foods to carry back into the camp. All of the refugees were divided at night. Le described it as present day prison buildings.

With little hope, Le signed paperwork and agreed to go back to Vietnam. Because of this agreement, the government would fly her back to Vietnam and give her $200. Because her nieces were minors, they were sponsored and sent to the U.S. and Canada. Phan refused to go back and fled. He was eventually caught and sent back to Vietnam, but without any money. Together again, they lived in a refugee camp for two more years.

In 1997, Le finally got a break for a better life. The U.S. Embassy sent her a letter. The U.S. government would interview her, and if she passed, they would grant her acceptance into the country.

And so the journey to the U.S. began in April of 1998. Le obtained a visa and airline ticket. As part of her interview, Le was asked if she had any relatives in the U.S. She did, but wasn’t exactly sure where they lived. Regardless, she was very independent and did not want to impose on their lives.

After arriving in Atlanta, Le traveled to Gainesville, Ga., where a Baptist church there sponsored her. She resided with a family that attended the church. Le qualified for food stamps for six months, but it was stipulated that during that time period she must get a job.

Two months after arriving in the U.S., Le traveled to California to visit her deceased sister’s son. With no mother, Le decided to take on that responsibility and stayed to help care for her nephew. She worked at a window blind company making $183 per week. At night, Le walked two miles one way to attend ESL (English as a second language) classes.

In October 1998, Phan also made his journey to the U.S. He was in Knoxville, Tenn. Upon contacting Le, she borrowed enough money for Phan to fly to California. He secured a job at the same company Le worked for and made $5.50 per hour.

In 2000, Phan left California and traveled to Birmingham. Le joined him after just a couple of months. Upon her arrival in Birmingham, Le worked at a nail salon, from 9 a.m. until 9 p.m., for five years. She saved $30,000 and opened her own salon in Oneonta. Nail Art has been a thriving business since opening in 2005.

Le and Phan had dated from 1991 until 1998. It was in 1998 they decided to move in together. The concept of “free love” is frowned upon in Vietnam and Le’s mother was not happy with their living arrangement. In 2006, they decided to marry. They traveled back to Vietnam for the ceremony. This made Le’s mother very happy.

Phan and Le had decided to get settled before having children. Le also had respect for her mother’s wishes of not having children out of wedlock. Their only child, Nam, was born in February 2008. Le’s mother traveled to the U.S. and was finally able to see her grandson when he was 3 ½ years old. Seeing Nam brought great joy to Le’s mother. She told Le that if she passed away now, she would be happy.

Since coming to America in 1998, Le has returned to Vietnam to visit with family only three times. She misses her family, but has no desire to return and live there. She worked hard to legally become a U.S. citizen and to make an honest living.

Le believes in paying for things up front and not extending unnecessary credit. She also does not believe in getting help from the government as she chose to come to America. Her journey was long and difficult. At times, she was scared and afraid, but Le stayed strong, and, with an abundance of determination, she has accomplished what she set out to do that night when she left Vietnam to begin her life anew. Le said, “I am living the American Dream.”